When I told my mom I was going to Đồng Hới, Quảng Trị, she puzzledly asked me why I was going there. Travel sites also warned that there was nothing to do there. Tripadvisor hardly had any information on lodging and places to eat, and I read that no one there spoke English. There are no tourists, not even Vietnamese tourists. No tourists, no English! To me, that meant it was going to be the real Vietnam.

Quảng Trị Province is merely a center where tour buses simply pass through to historic war sites such as the DMZ, marine bases and lookouts, camps, trails, and the famous Vịnh Mốc tunnels.

In the late 60’s the province of Quảng Trị was completely destroyed since it was used as a battlefield. Of the 3,000 tribes that originally settled there, only 11 remained. After the war ended in 1975, villagers moved back to Quảng Trị to rebuild their lives, only to fall victim again. Of the 15 million tons of bombs the U.S. military dropped, 10%  failed to explode upon impact, so imagine the outcome for the villagers who ended up farming on the land, or the children who found and attempted to play with them. There are thousands of Explosive Remnants of War (ERW, aka unexploded ordnance) in and around the area, and over 100,000 villagers have been killed between 1975 and today, 31% of them being children. Only recently Project RENEW and the Dept. of Foreign Affairs have collaborated to help search and destroy these ordnances and provide aid to the victims. Chris and I learned a lot from the Mine Action Visitor Center. We found their project moving and made a donation. You can make a donation too – just visit their site! =)

The Mine Action Visitor Center in Đông Hà, the capital of Quảng Trị, is only 2.5 years old and hardly anyone knows about it.

The facade is decorated with shells and bombs from the war, both exploded and unexploded (and deactivated – whew!).

Large maps and charts are displayed upon the high walls. The map below shows which areas were heavily bombed (marked in red): 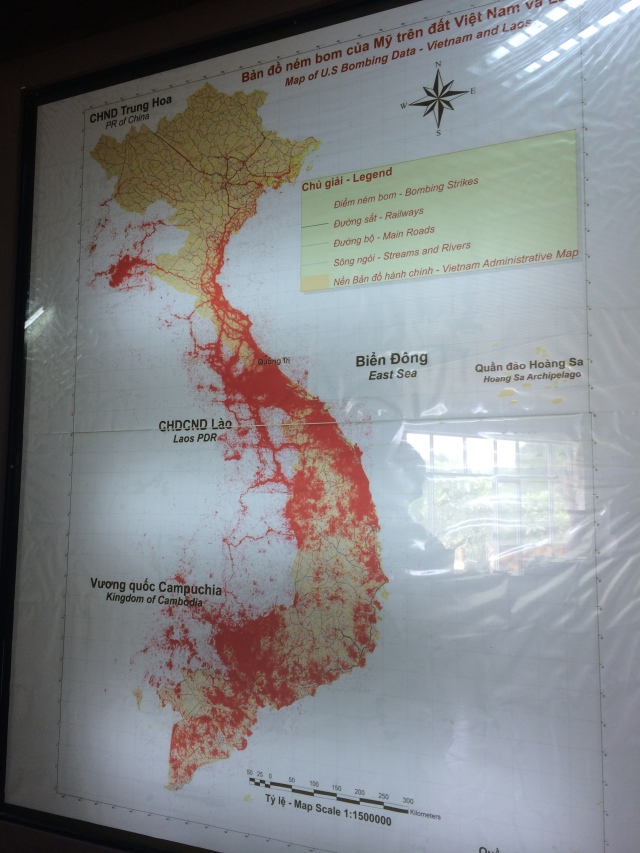 There are before and after photos of Quảng Trị, and plenty of war remnants from the U.S.: 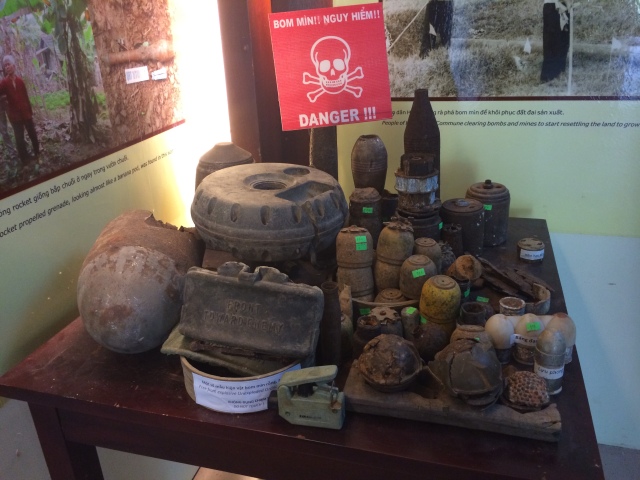 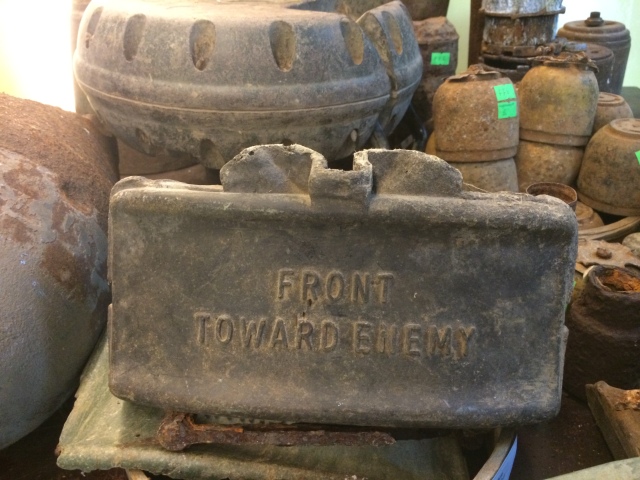 The Mine Action Visitor Center helps prevent accidents by spreading education about ERWs. Now schools in Quảng Trị teach children how to identify ordnances and what to do when they find them. Illustrations from school children show what they learn. Read the description in the illustration below: 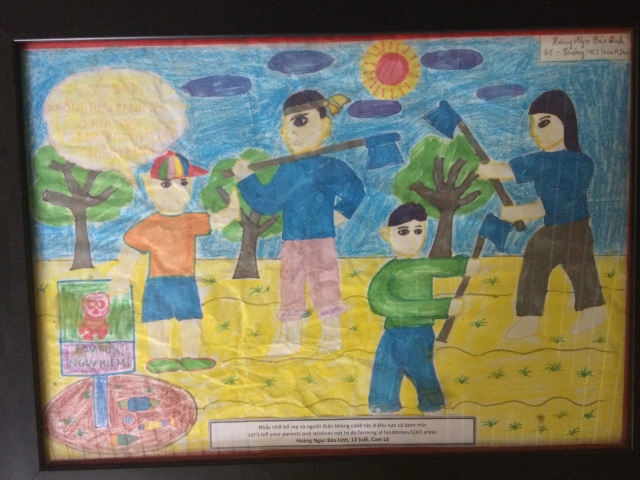 One of the major jobs the program provides for the casualties is mushroom growing! The funny thing is the type of herbal mushroom they grow is called Linh Chi, which is my Vietnamese name!

In addition to the Mine Action Visitor Center, we also made the excursion to the underground Vịnh Mốc tunnels, about 40 km northeast of Đông Hà. Unlike the tunnels near Saigon which were used for war, these limestone tunnels were dug out as dwellings for the villagers from 1966 to 1972. Don’t just think “tunnels” – there were bedrooms, family rooms, maternity rooms, bathing rooms, bomb hideouts, and more. The U.S. had demanded the villagers to leave but because they had no where else to go, approximately 60 families resorted to living beneath the ground (at a depth up to 30 meters!).  Although the U.S. military dropped 9,000 tons of bombs over them during this time period, no one in the tunnels were killed.

I’m short, so I didn’t have to crouch while walking through the tunnels. The ceiling was just about an inch above my head.

This is one of the many bedrooms.

There were multiple entrances and exits. 6 led to this beautiful coast. There is currently some construction for support, but I imagine 50 years ago, the jungle ended with a slope of sand into the ocean. 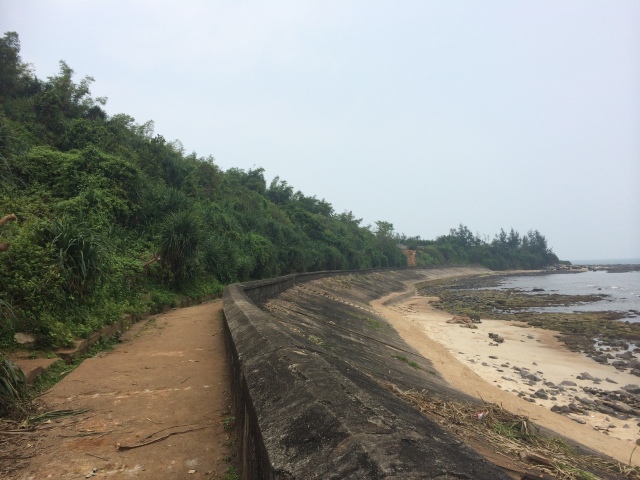 Here is one crater blast from a bomb: 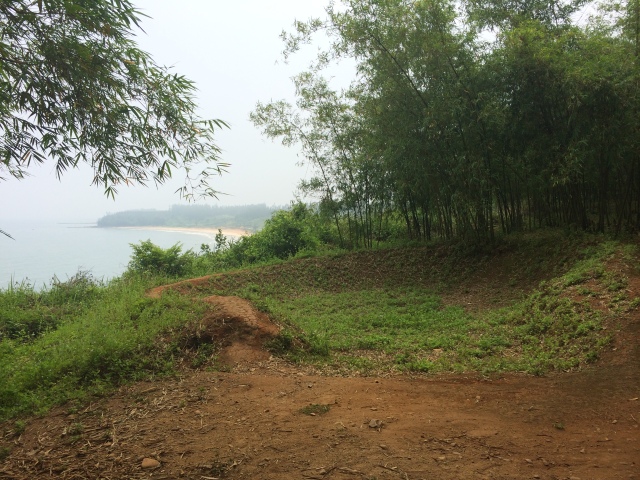 And here, Chris walks past a bunch of bomb blasts:

These bombs were HUGE! They were taller than me! 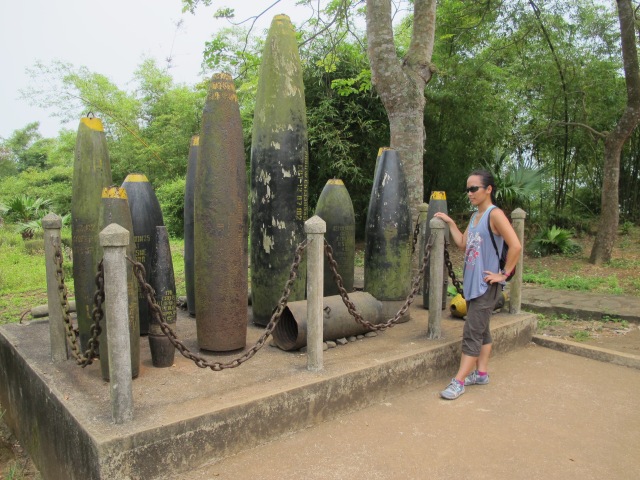 Standing in the center of a bomb blast:

If you’re a history or war buff, Central Vietnam is definitely a place to check out. Or if you want to escape tourism and check out the “real” Vietnam, go to Quảng Trị! Because tourism hardly exists in Quảng Trị, a few things stuck out: 1. Chris and I were definitely “the other” which was amusing but creepy at times; 2. People were generally nicer and less likely to harass us; 3. We generally did not feel like we were getting ripped off. I’ll elaborate more below.

Throughout Vietnam, young children are always eager to wave hello to Chris. In Đông Hà, it felt like everyone wanted to say hello. During our first evening walking around the streets, an entire construction site from 6 stories high all excitedly waved and shouted hello to Chris below. Groups of school children would excitedly call out hello in unison, and men and women both young and old would happily exclaim, “Hello!” When our shitty scooter broke down in the middle of no where (I can elaborate more in person if you ask me), this guy came to help repair it. He also brought his baby, and as we enjoyed sugarcane drinks together, his wife plopped the baby into Chris’s lap without any warning. The baby’s father and another man immediately took out their cell phones to take pictures of the baby with Chris, the “white guy.” Everywhere we walked, someone would notice and tell his or her entire group of friends or family, and they would turn to look our way and stare. Most would greet us, and some did not, so yes, it was a bit creepy at times.

In the touristy areas, the Vietnamese try to exploit foreigners as much as possible. The Vietnamese pretend to be the foreigners’ best friends but when they show disinterest, the Vietnamese are not afraid to reveal the sneer on their faces and their true disdain for them. Because the people of Quảng Trị rarely have the opportunity to interact with foreigners, they seem more eager just to say hello than to make a sale.

Stemming off from that generalization, it honestly felt like the Vietnamese people in Quảng Trị were not trying to rip us off. Excluding one bad experience with a shitty restaurant, we were charged local prices for everything (50 cents for a breakfast baguette, sausage, and eggs, $1 USD for the quick scooter repair, 25 cents for sugarcane drink, 25 cents for chè, $1 for bún thịt nướng). In Huế when I asked a street vendor in Vietnamese how much her sugarcane drink was, she told me 5,000 đồng (25 cents), but as soon as she saw Chris, she doubled the price. We did not have to deal with that in Quảng Trị!

Central Vietnam’s history of war and their treatment of foreigners definitely made my stay enjoyable. Despite what my mother, travel blogs, and travel agencies advised, I am happy that I visited Đông Hà, Quảng Trị.