Considering how far the Great Pyramids of Giza are from Cairo, I thought, “Why not spend a couple nights in Giza and check out the sites from there?” After all, the pyramids are one of the main reasons why people come to Egypt. Plus, staying in Giza not only allowed us to leisurely explore the Great Pyramids but also other less notable pyramids in the area.

Then I discovered a couple of budget hotel options in Giza that sealed the deal. Can’t beat this terrace view for $30 per night, right? 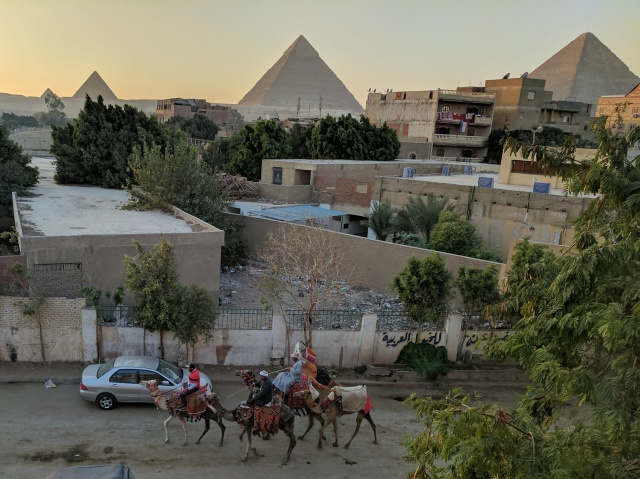 Sound and light show in the evening from the terrace:

We checked out of our hostel in Cairo in the late afternoon and took an Uber to Giza. It’s no wonder everyone recommends Uber. For the 50-minute drive through traffic, the ride came out to less than 40 LE (about $2!). Wow. Way better deal than dealing with annoying taxi drivers. Giza’s Great Pyramids looming into view from the backseat: 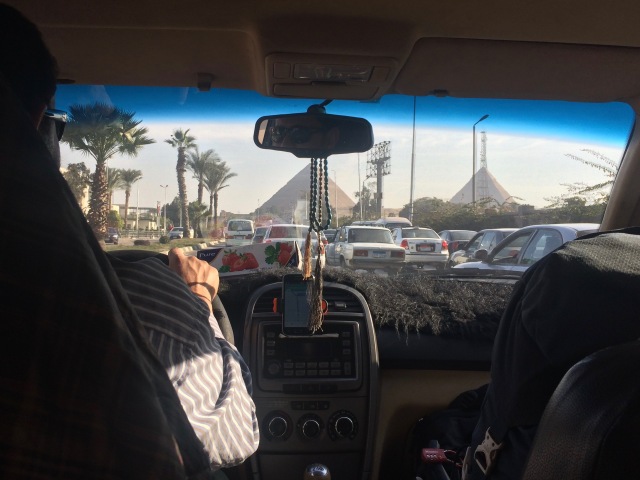 And we soon enjoyed sunset over the Giza pyramids from our hotel terrace. 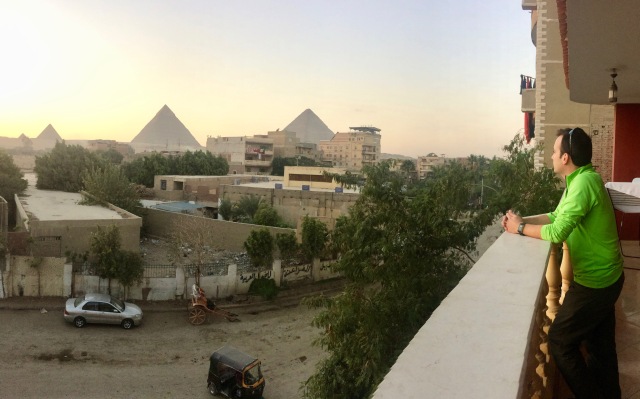 That night we wandered the local streets for dinner and quickly discovered that tourists rarely venture the streets of Giza. With most tourists shuttled around by bus and large groups with set meals at specific restaurants, locals rarely see independent travelers, especially at their food joints. Children waved shyly at us, and even adults welcomed us as we passed by. Those with decent enough English did not hesitate to strike up a friendly conversation with us. 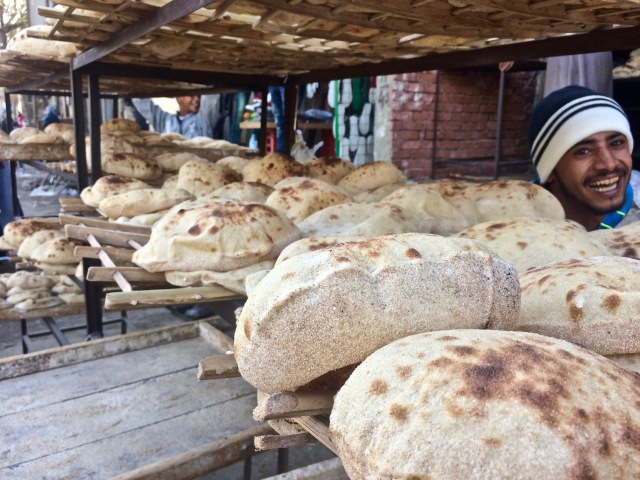 For dinner we chowed down on kushari, the national dish of Egypt, for 5 LE (about 25¢). 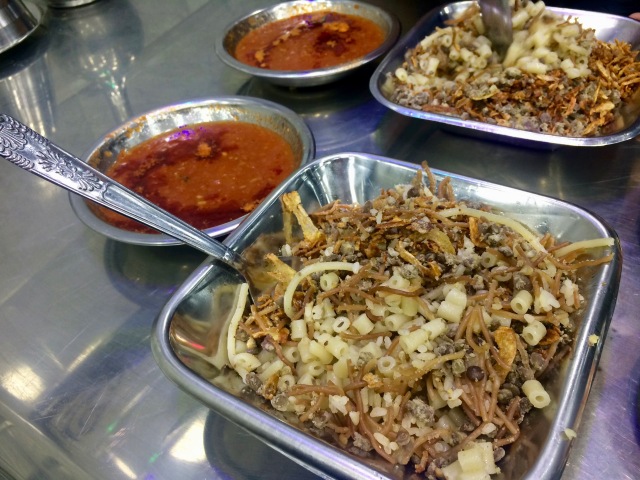 Early the next morning we stepped out of our hotel and were immediately greeted by camel touts. 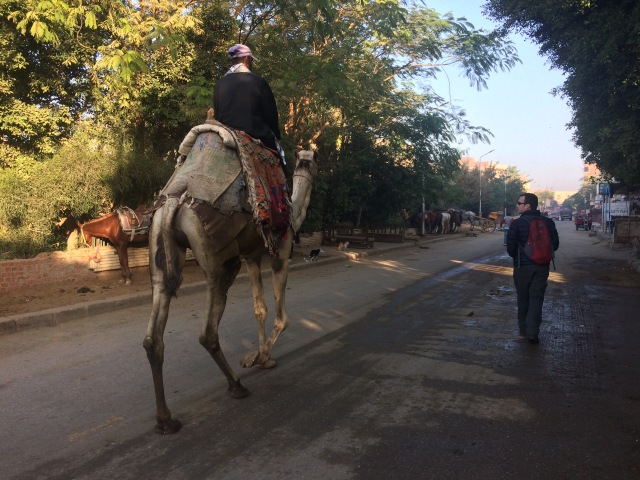 We ended up on a tuk tuk for 5 LE that dropped us off about a 15-minute walk from the main entrance/ticket booth. In a once-filled parking lot by 8:30am was a vast, sparse lot with only a couple of tour buses. Unlike other worldly sites such as Machu Picchu in Peru or the Acropolis in Athens, purchasing a ticket and getting through security was quick and stress-free. Once again the lack of tourists was remarkably evident.

With the crisp December air and the panoramic viewpoint only about a 30-minute walk from the entrance, we decided to stroll along the paved road that took us to the panorama. Two giant tour buses scurried ahead, and persistent touts tried to convince us to ride a camel since the viewpoint was “a far walk.” Why is it that in so many countries people consider 1-2km to be a far walk? It wasn’t far at all, and we enjoyed walking at our own pace, stopping to take photos, and having the road all to ourselves. 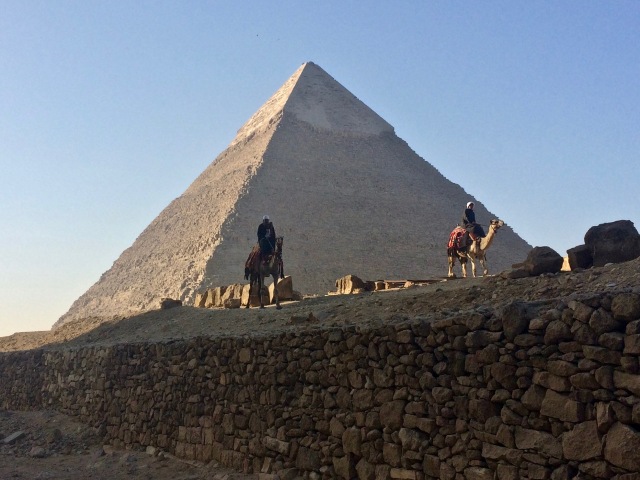 We arrived to the panoramic viewpoint just after 9am. It wasn’t too crowded—yet. 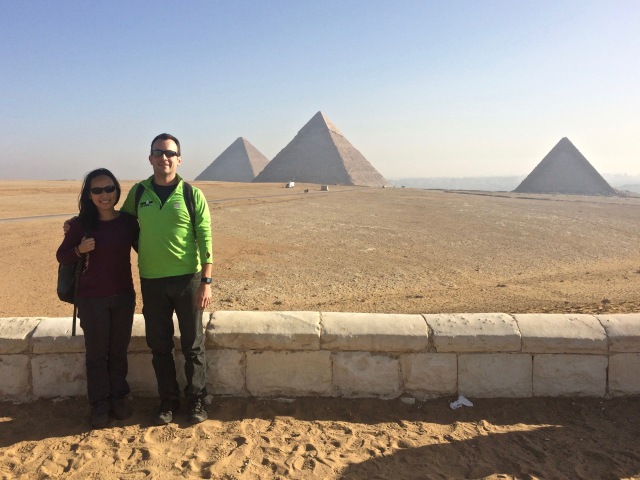 By 9:15, we saw more buses approaching from the main road, and we left before the viewpoint was swarmed. Although plenty of touts offered us camel rides to the Great Sphinx (3-4 km), we again preferred to walk. Thankfully we did, because we managed to snap a few more iconic photos that the bus tourists couldn’t stop to enjoy. 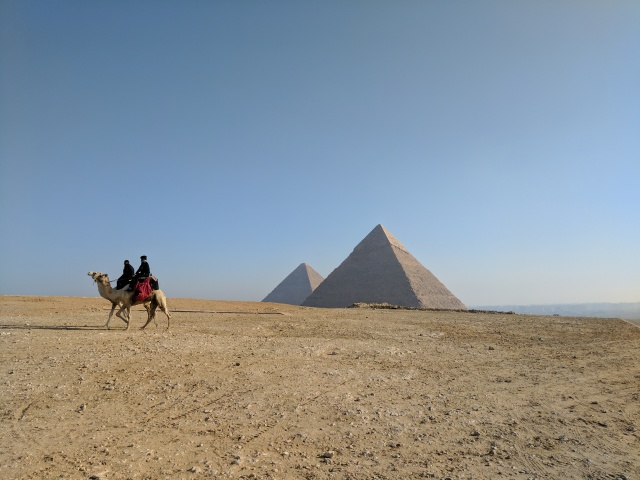 The Pyramid of Khafre all to ourselves: 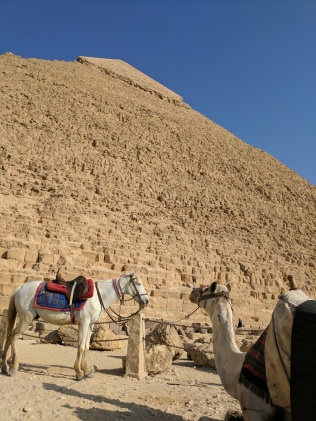 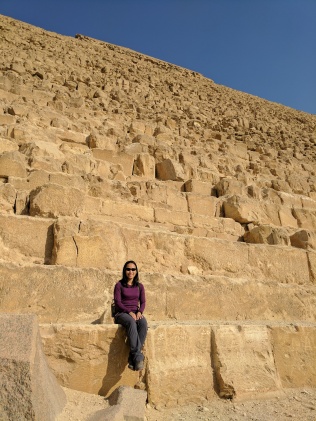 We finally gave in to a camel ride from the Khafre Pyramid to the Great Sphinx because it was a short ride and only 20 LE for both of us. The camel tout earned extra in tips for taking cheesy tourist photos. 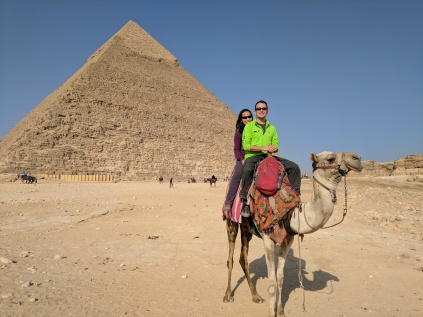 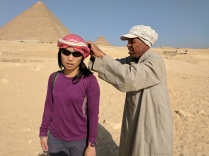 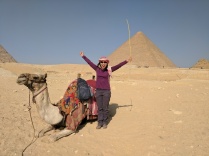 Finally, the Great Sphinx. As everyone says, its size compared to the Great Pyramids is slightly underwhelming. Still, I was shocked that the majority of the bus tourists crowded at the front, snapped dozens of photos, and left. They never even walked to the far end of the Sphinx to observe a different perspective! Oh well. Their loss. 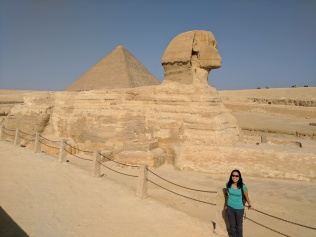 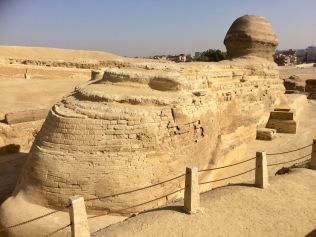 After 3 hours of exploring the Great Pyramids of Giza by foot, we set out to our next destinations: the Bent, Red, and Step Pyramids near the village Saqqara. These lesser-visited pyramids are about an hour’s drive south of Giza, and I read that most people venture there by hired taxi/private car. We figured we’d hire an Uber car and wing it. Our Uber driver didn’t speak any English but enjoyed taking us to these pyramids; he had never seen them before and took pictures of them while he waited for us at his car. The ride down, back to Giza, and the wait time all totaled to 3.5 hours…and about 150 LE (~$7). We tipped him 100 LE in cash and that clearly made his day.

The Bent Pyramid looks…bent…due to the late discovery of the steep-leaning stones’ instability during its construction. Halfway during the construction the builders were forced to reduce the steep angle, which gave the pyramid its appearance and name. 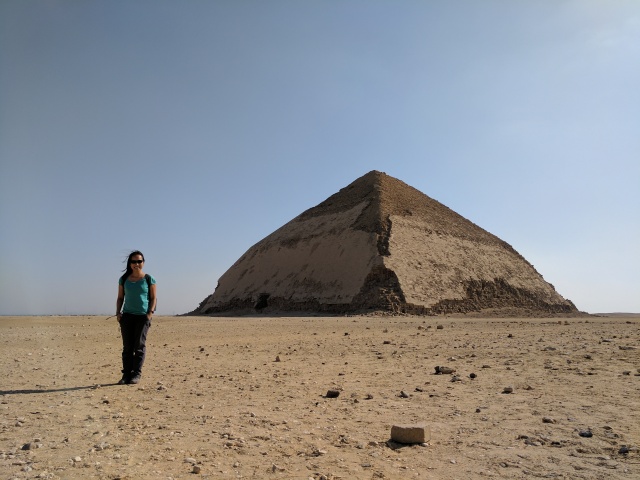 Just a kilometer or two north from the Bent Pyramid stands the Red Pyramid, the only pyramid we entered during our time in Egypt. I read that it cost 200 LE (~$10) to enter the empty Great Pyramid of Giza in addition to the entrance fee of 80 LE, but the cost to enter the Red Pyramid is included in its entrance fee of 40 LE. Due to its remote location and scarcity of visitors, we literally drove up to the pyramid and parked next to it. 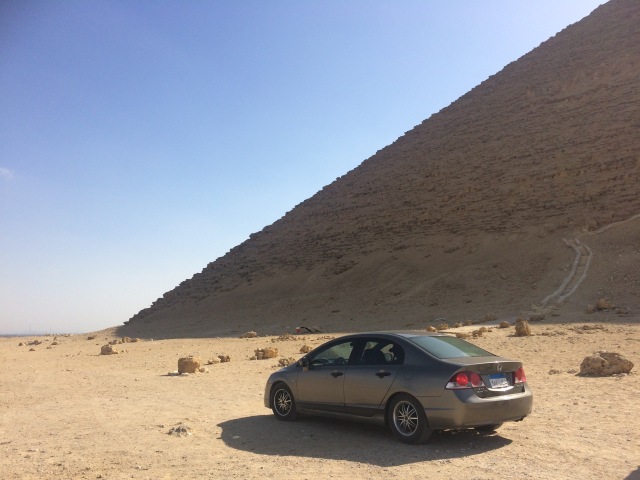 Then we climbed up the pyramid. Luckily it was only a short climb. 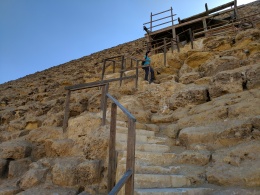 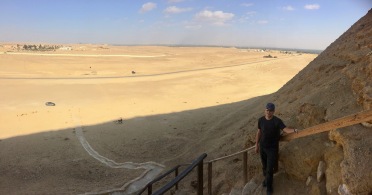 The descent down into the Red Pyramid surprisingly challenged us; having to squat, hover and make our way down 60 meters through a narrow tunnel is not easy. Oof. Like all pyramids, the Red Pyramid’s treasures have been removed. The only real novelty is bragging rights for entering an ancient Egyptian pyramid. 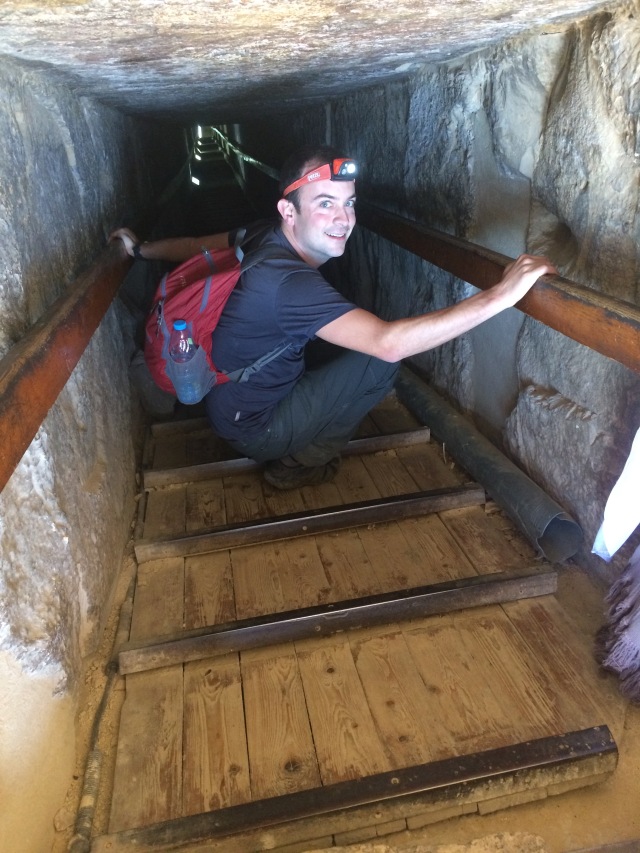 Finally, we concluded our tour of the pyramids with the Step Pyramid of Doser, the world’s earliest stone monument. 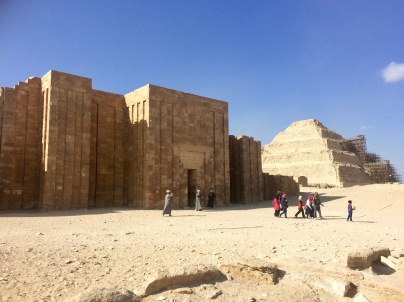 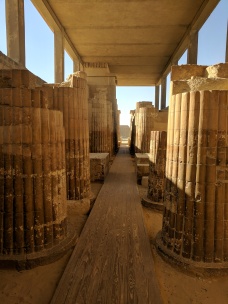 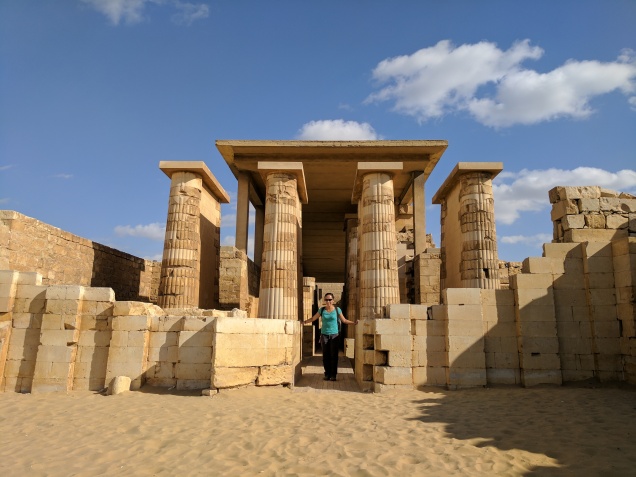 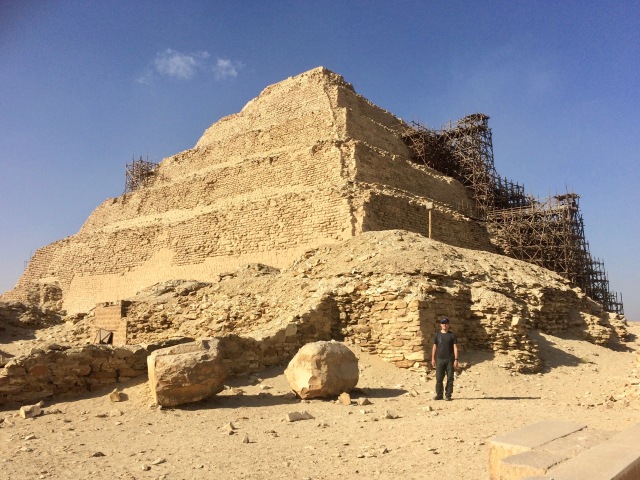 After a full day of multiple pyramids, our quench for pyramids was exhaustively satisfied. I can’t imagine how much more overwhelming the self-guided tour would have been if there were thousands more tourists and exponentially higher temperatures. Thanks to spending a couple nights on the grounds of the Giza Pyramids, we were able to tour the Giza Pyramids completely on foot and spontaneously hire a Uber driver to Saqqara. First visitors to Egypt should definitely spend at least a couple nights in Giza rather than spend all nights in Cairo.

Gazing at a full moon over the pyramids from our hotel terrace was also icing on the cake. 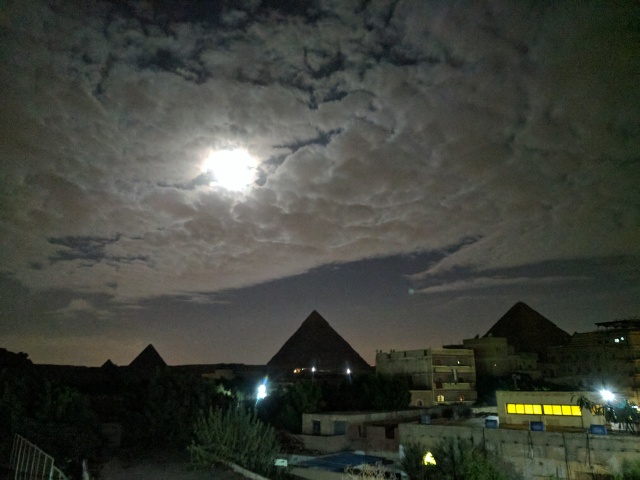 In a nutshell, here is my advice for independently touring the pyramids:
1. Spend at least a couple nights in Giza, making it your base.
2. Arrive to the Great Pyramids when they open at 8am.
3. Go NOW (2017) while tourism is still down.
4. Visit in the winter when the weather is cool.
5. Bring plenty of water, snacks, a guidebook, and a smartphone with Uber installed.
Now you’re golden. Have fun!

3 Responses to An Independent Pyramid Tour