Before entering Chicago, we had the fortune of dropping off Scromp in the burbs.  I was hoping we would have the same sort of luck during our stay in the city…perhaps a friend or friend of a friend who lived in the outskirts of NYC would have been kind enough to take in Scromp while we toured NYC.

Instead, a friend told me the story of the time when he spent a summer camping on Long Island.  “There’s this free parking lot under the freeway bridge in Brooklyn on Meeker and Graham,” he wrote to me.  “I slept in that parking lot for three weeks, and I know I wasn’t the only one who did.  Street sweeping times are sane, it’s super close to the metro station, and it’s FREE! I’d consider bringing the trailer there.”

Although Chris and I weren’t totally gung-ho about the idea of sleeping under a freeway bridge in Brooklyn, we at least got a kick out of it and decided to go for it.  Our Plan B was to seek refuge at a Walmart parking lot east on Long Island if the cops made us move, and then drive daily to this free parking lot to take the metro into Manhattan.

And that is how we ended up paying $37.50 in tolls (for 3 axles) to cross the bridges into Manhattan and Brooklyn the morning after Niagara Falls.  I’ll never bitch about the $6 Golden Gate Bridge toll in San Francisco again. 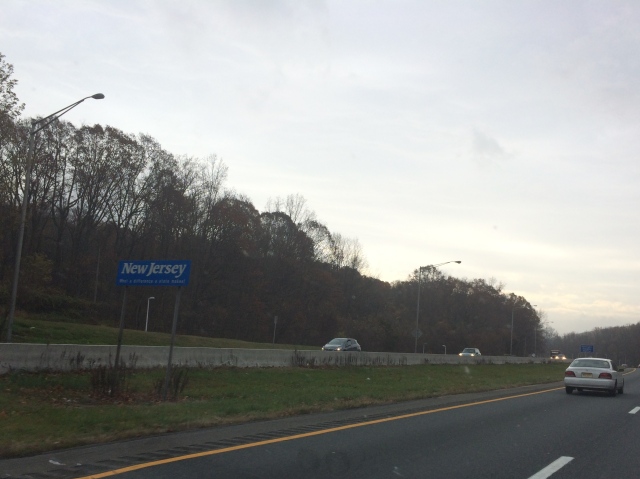 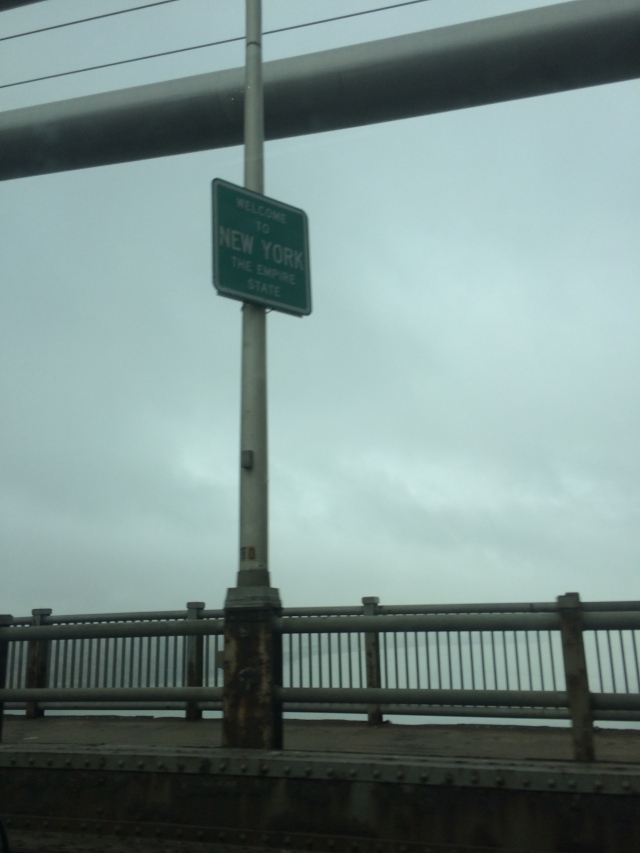 We arrived at the recommended parking lot in Brooklyn on Wednesday afternoon.  Loads of parking space–unbelievable! 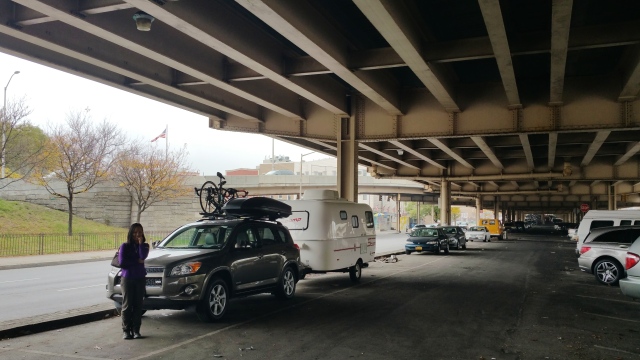 Street sweeping was on Thursday morning, so we ended up moving the trailer across the street where street sweeping took place on Wednesday mornings.  Instead of sleeping under the freeway bridge, we ended up sleeping beside it.  Unlike Chicago and San Francisco, parking was plentiful in this safe neighborhood.  Scromp remained parked here for the duration of our stay in New York, Wednesday through Saturday.  And to make the situation even funnier, it turned out that my cousin lived just a 10 minute walk away.  We definitely hung out at her condo more than once! 😉 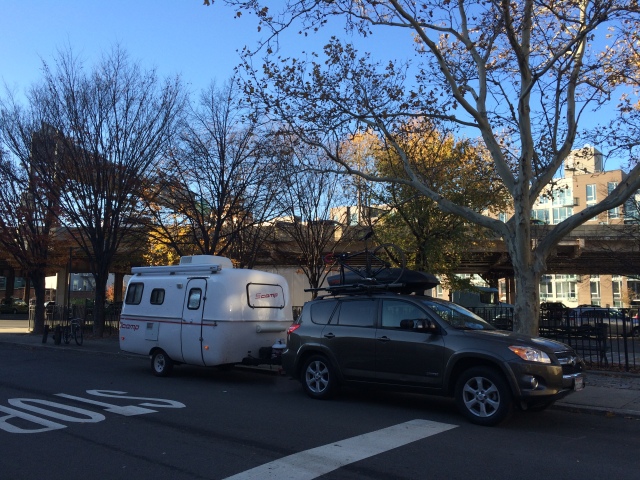 In order to avoid the possibility of having someone knock on our door in the middle of the night, we hung up towels over the windows with binder clips to block the light.  You couldn’t even tell if someone was inside the trailer from the outside! 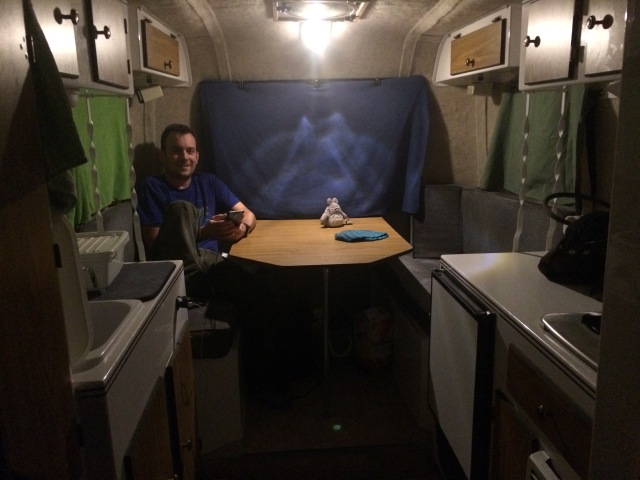 After spectating the parking lot and validating the safety of the neighborhood, we took the metro into Manhattan.  We hurriedly scarfed down a slice of pizza and sauntered to the southern tip of the island where we rode a ferry to the Statue of Liberty. 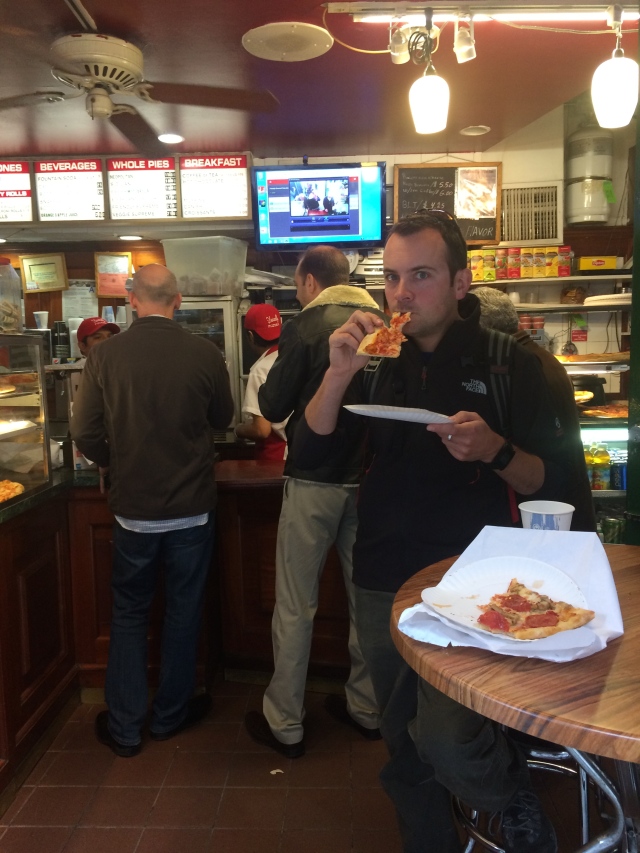 We had about an hour until sunset, and the view of Manhattan from the ferry was picture perfect as the sinking sun illuminated the skyline. 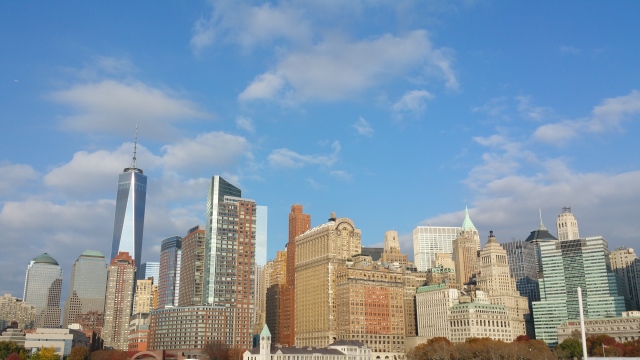 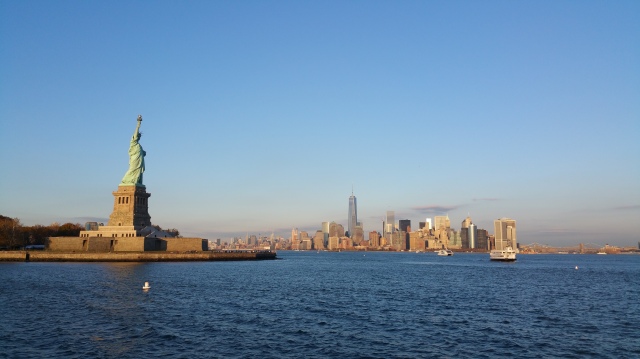 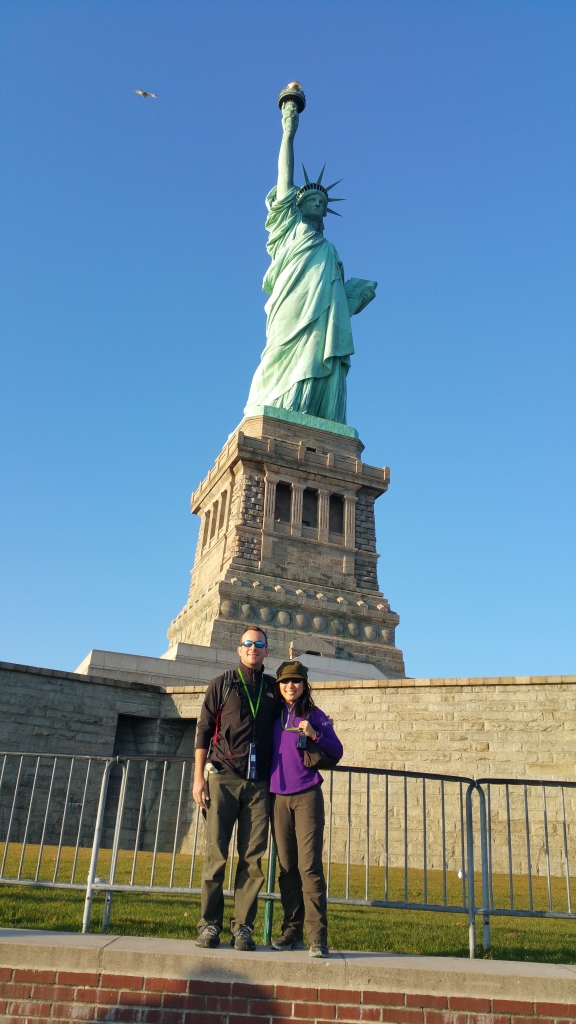 After viewing the Statue of Liberty, we walked through Wall Street on our way to the 9/11 Memorial.  I was all about the bull with giant balls. 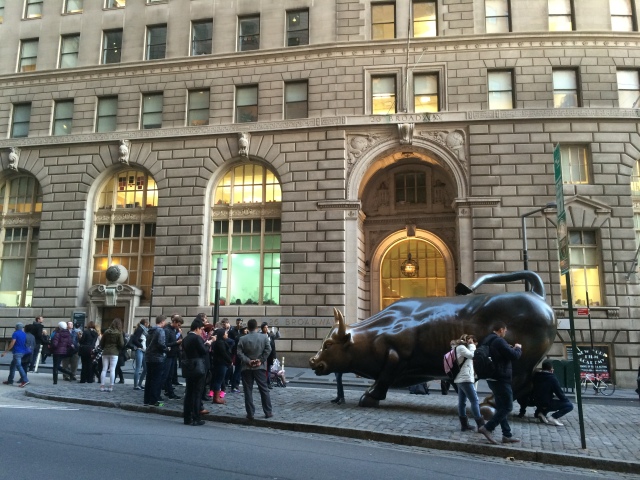 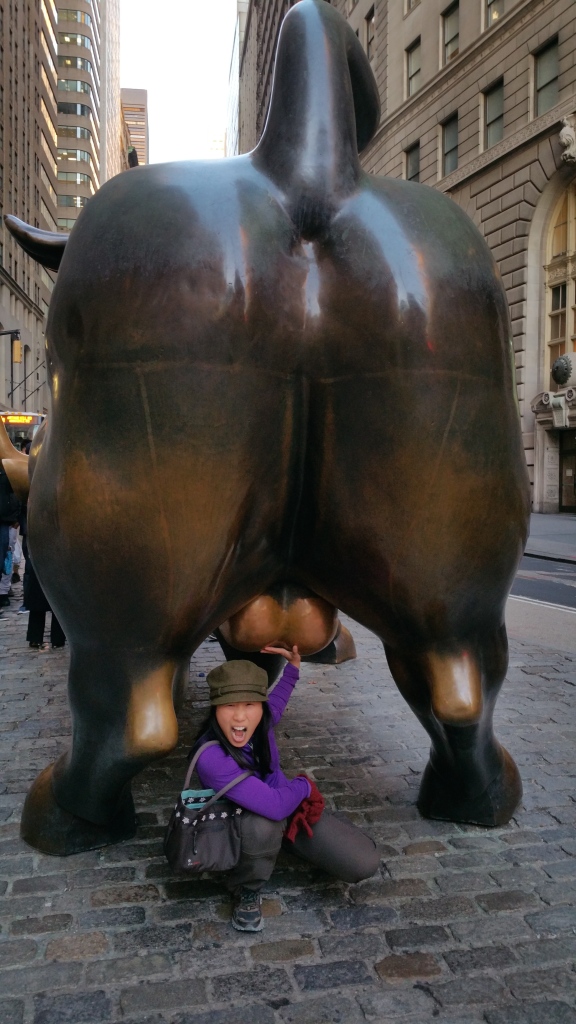 The first time I visited New York was just two years before the 9/11 attacks.  My family and I had toured the World Trade Center, and even observed NYC from the WTC’s overlooks. This time, we stood before the 9/11 Memorial, which was an incredibly beautiful and sobering experience. 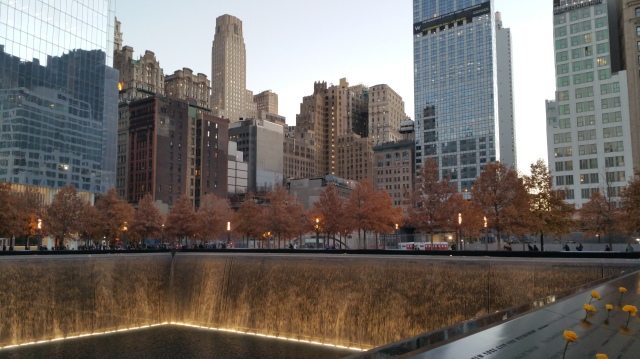 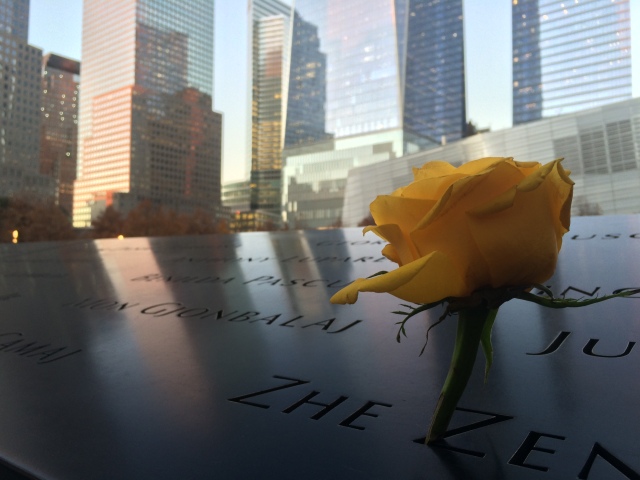 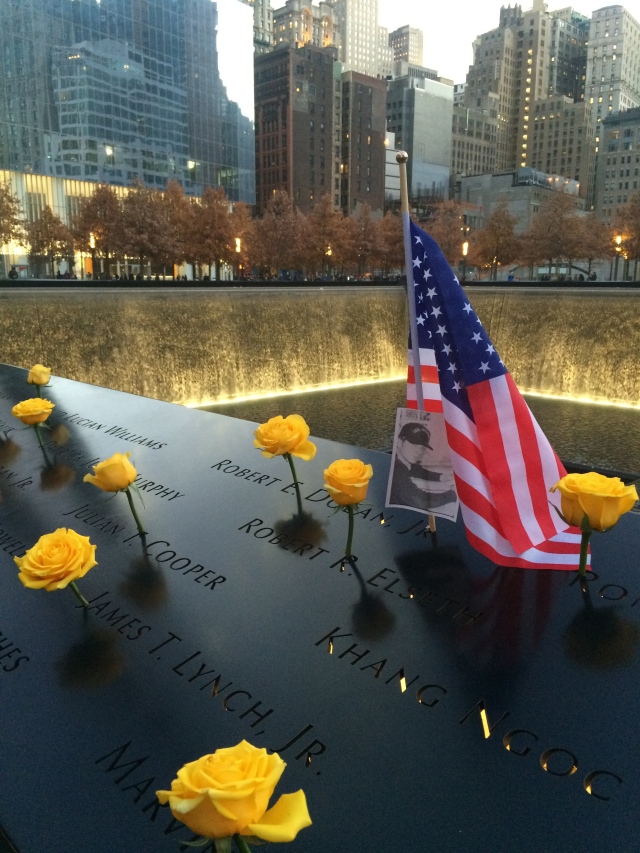 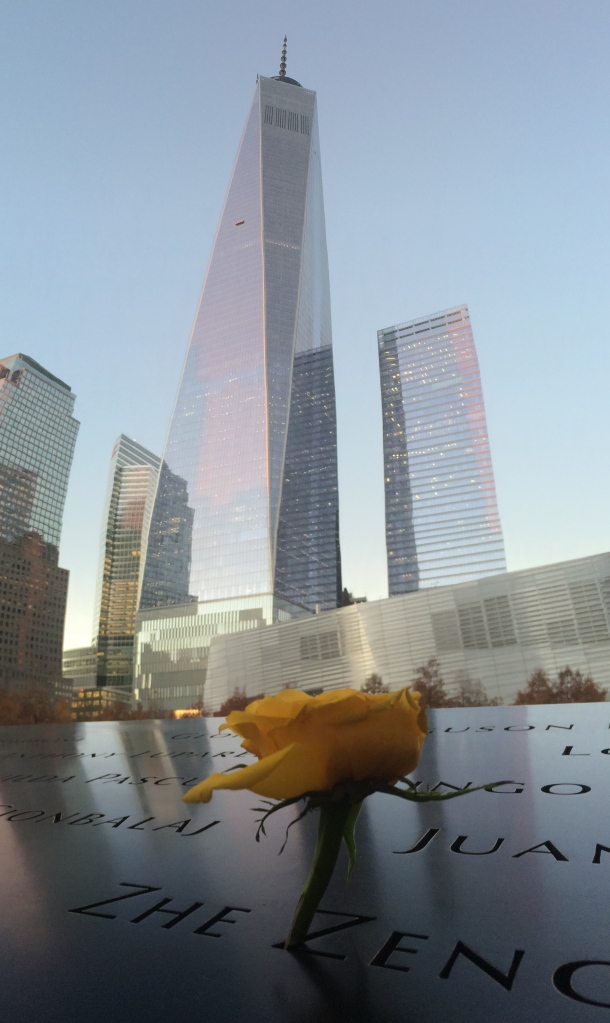 Whew. Not bad for a first day in New York.  The following day was even more jam-packed with sites and activities.

We started off by going to the Empire State Building, but because we were turned off by the insane $29 admission fee, we quickly made our way over to Grand Central Station. 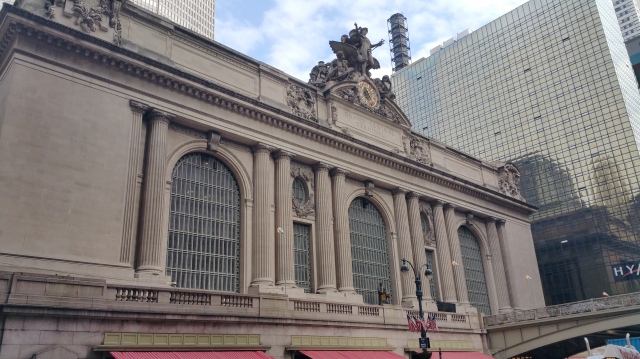 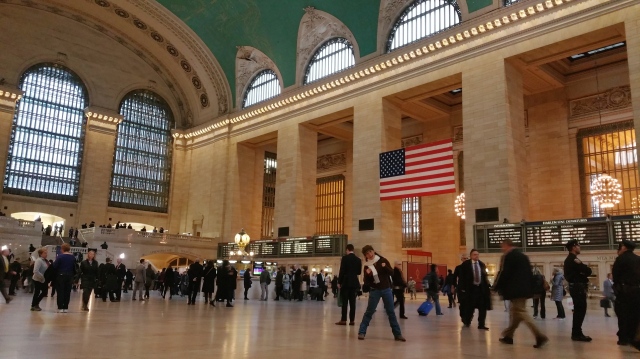 Then we hurried over to the Rockefeller Center ice skating rink, where holiday preparation was taking place.  Scaffolding had been already constructed and people were busy assembling the giant Christmas tree in time for Thanksgiving.  This made Rockefeller quite an eyesore, so no pictures of it will be posted here! After a glimpse of NBC filming down the street, we made our way over to Times Square. 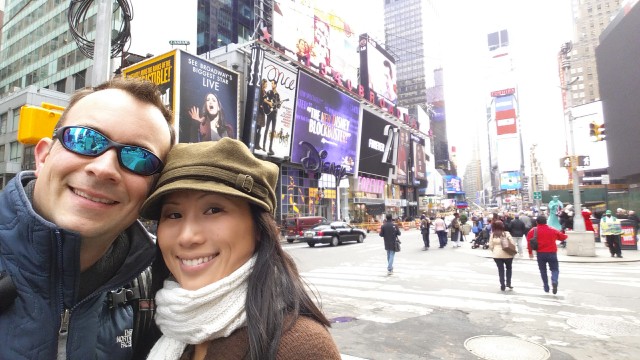 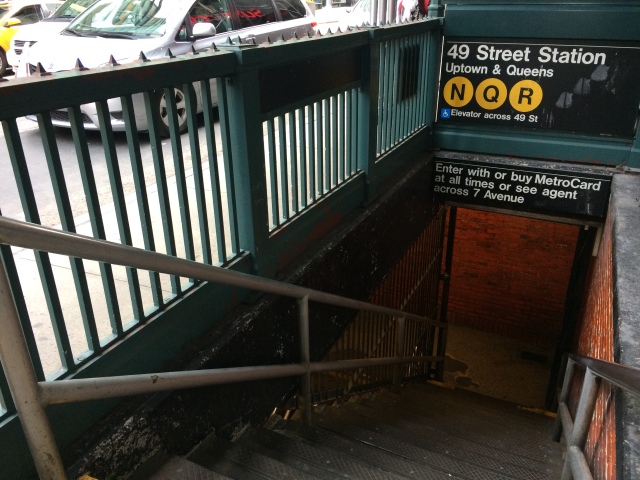 Avoiding NYC assholes in Times Square turned out to be a combat sport even in the day time, and we quickly headed south toward Chelsea Market to get a sample of unique gourmet food for lunch. 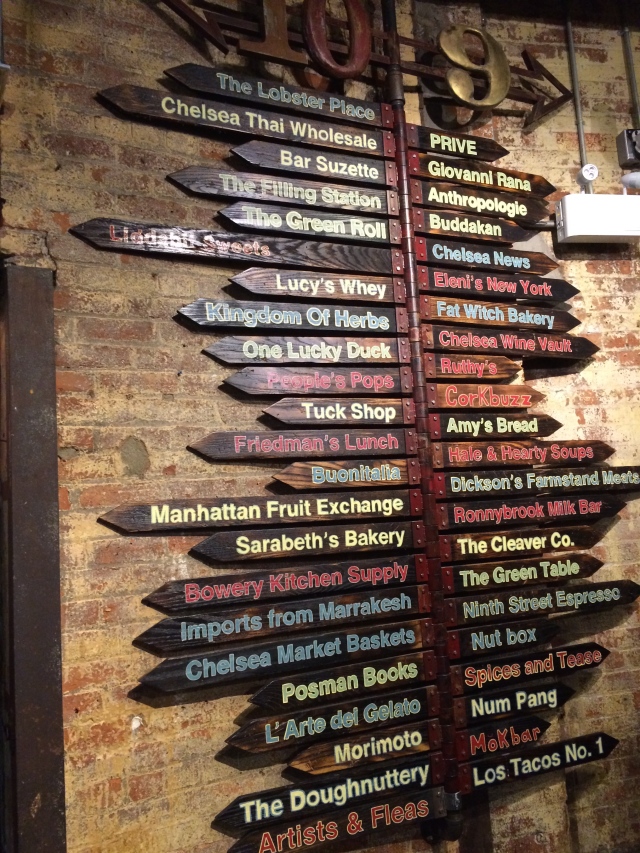 A long, late lunch break recharged our bodies with energy, and we scurried over to a rooftop bar I visited 2 years ago.  The rooftop bar on 230 Fifth Street is known for its stunning view of the Empire State Building. 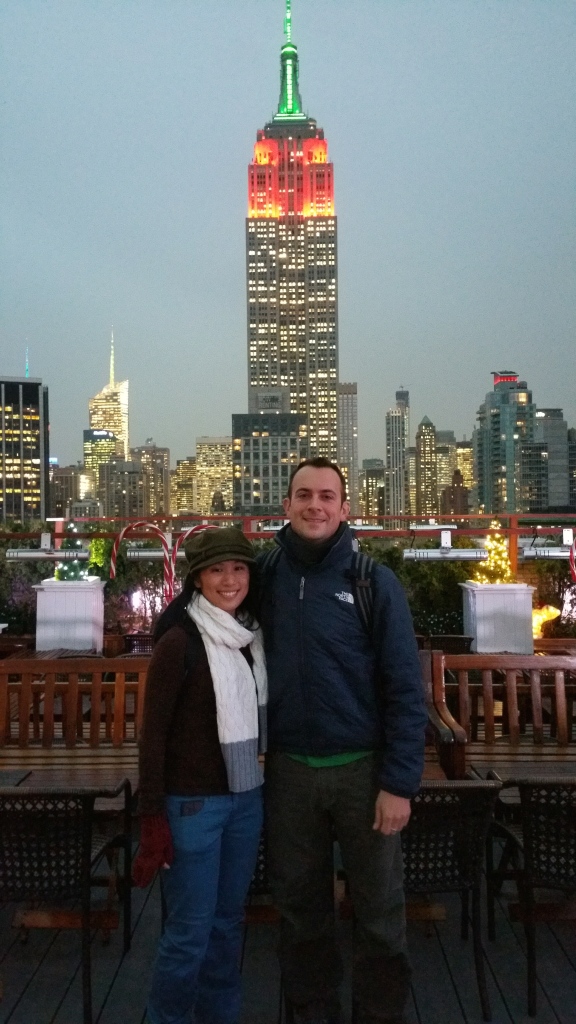 Two glasses of red wine later, I led Chris through Times Square again to be dazzled by the amount of wasted electricity and to battle the combat sport of Rush Hour In Times Square. Not only was it Asshole Central, there didn’t seem to be a scarcity of hideous tourist-hungry costumed characters hustling to make a quick buck. 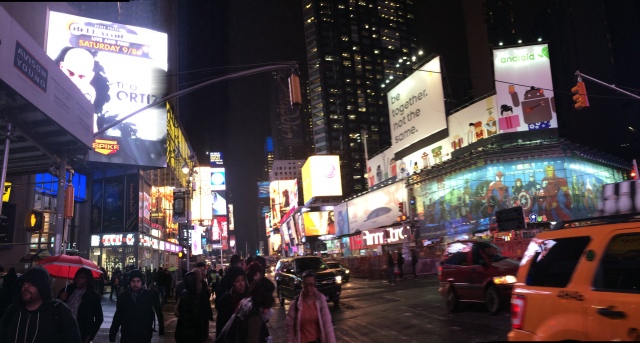 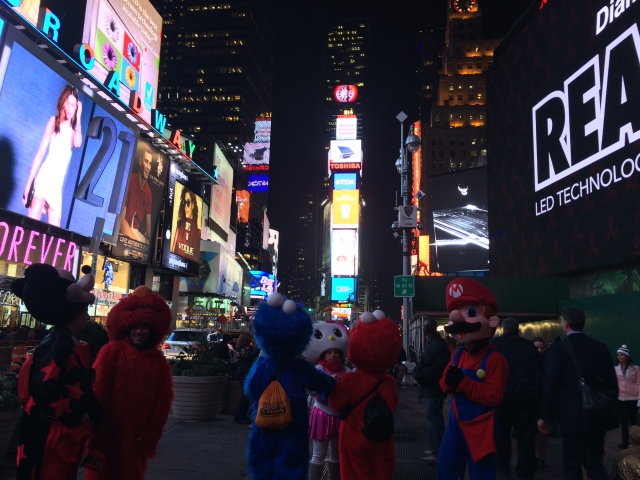 We concluded our second night in NYC with a lovely home-cooked dinner at my cousin’s in Brooklyn.  The next day was a bit more chill since we planned on conserving our energy for some bar-hopping and dancing that night with a friend from SF.  We returned to Chelsea Market again for breakfast, followed by a stroll down High Line, the newest and perhaps trendiest park currently in the works in West Manhattan.  Trees and neatly planted shrubs were lined along a stretch of an elevated historic railroad once used until the 1960s. 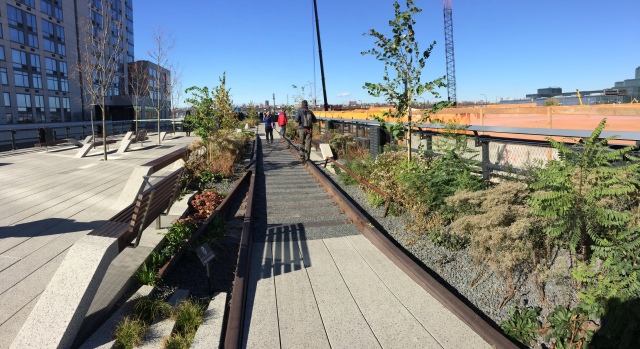 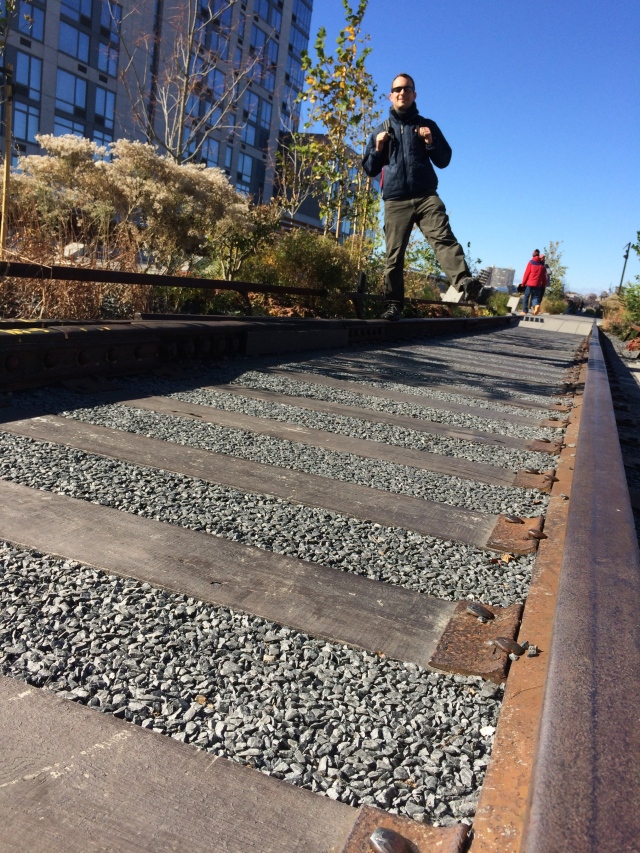 Later that afternoon, we crossed the Brooklyn Bridge as pedestrians.  A friend recommended this as a must-do in NYC, and we ended up enjoying it more than we anticipated.  It was a remarkable structure during its time when it was completed in 1883, and we still found the architecture and design extraordinary today.  Each overlook, skyline, and perspective from every angle provided a different composition for the artistic eye.  Like a tourist on San Francisco’s Golden Gate Bridge, we paused and snapped dozens of photos on New York’s Brooklyn Bridge. 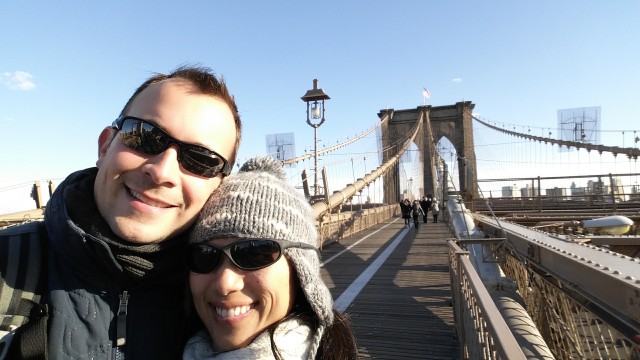 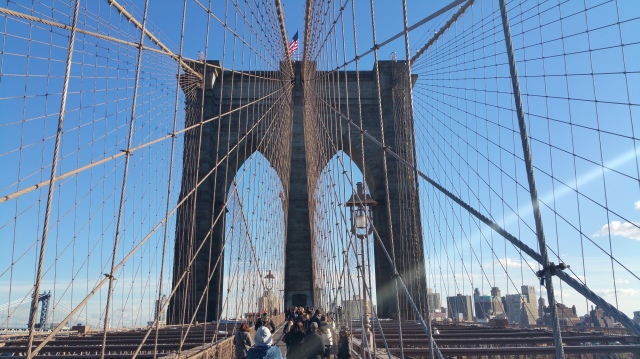 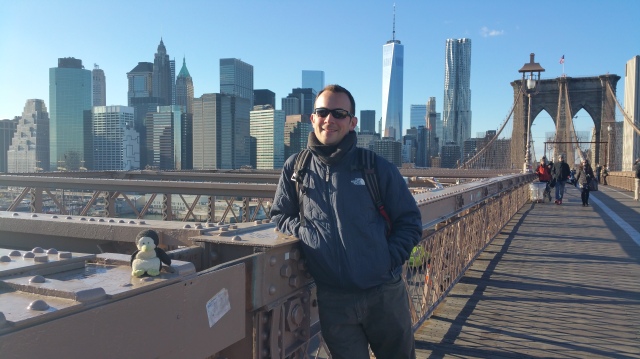 The beautiful day ended with dinner, drinks, and dancing with friends in the City That Never Sleeps on a Friday night.  Amazing food, great company, endless laughter, new fantastic memories.  This is what life is all about! 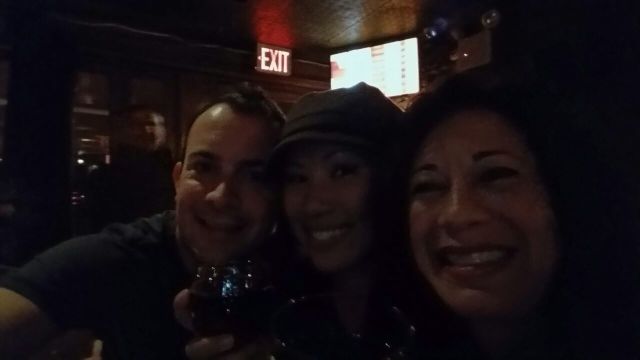 The 4-day, 3-night adventure in one of the world’s most renowned cities could not have been better.  Our short-lived abode beside the freeway bridge worked out for us and Scromp.  We devoured delicious gourmet meals, slurped hot beverages at local cafes, and sipped wine at lounges and bars.  We knocked out a number of the touristy must-do’s: Statue of Liberty, Wall Street, 9/11 Memorial, Empire State Building, Grand Central, Rockefeller Center, Times Square, Chelsea Market, a rooftop bar, High Line, and Brooklyn Bridge.  We enjoyed drinks and dancing on a Friday night.  We got in some family time with my cousin, and we even managed to hang out with a couple friends from San Francisco.  It was an action-packed several days in perhaps America’s wildest city, and we looked forward to learning about the history and foundation of America in our next two destinations: Philadelphia and Washington.

This entry was posted in New York and tagged 9/11 memorial, new york city, statue of liberty. Bookmark the permalink.