In previous years we used United miles to travel.  This time around we used American AAdvantage miles to fly business international from San Francisco to Berlin, Germany. Although American Airlines devalued their entire AAdvantage program for 2016, we were traveling early enough (February) to avoid the devalued award chart changes.  Only flights booked on March 22, 2016 and after were affected.  Whew.

Before I dive into our flight experience, I must say how horrible it was to book tickets using AAdvantage Awards.  First of all, award travel was scarce.  Second, almost all flights had three legs with awfully long layovers.  Third, all but one flight was a British Airways flight, meaning an additional $500+ “fuel surcharge” (which has nothing to do with fuel prices) would apply to the reservration.  And finally, every business class flight to Berlin only had one award seat.  After hours of creative flight building, we finally opted to fly separately.  Chris would fly the best flight on Sunday morning: business class from SFO to Chicago, then business class from Chicago to Berlin for 50,000 points and $5.60.  I would fly the more inconvenient flight on Saturday night: business class from SFO to London, London to Dusseldorf, and then Dusseldorf to Berlin for 50,000 points and $511.  Chris agreed to split the $511 with me, making both our business class flights a total of 50,000 points and $258.30 each.  All in all, the outcome wasn’t too horrible, but the process of seat-selecting using AAdvantage Awards was incredibly cumbersome and stressful.

Fortunately booking with AAdvantage Awards has one huge benefit–the unlimited ability to make any date and time changes for FREE.  Yep, that’s right.  As long as the departure and destination are the same, and as long as there is an available award seat on the flight of choice, date and time changes can be made for free!  We booked our tickets a month before departure, and two weeks before setting out, I casually looked at flights again.  To my surprise, an award business class seat opened up in Chris’ flight!  I immediately called American Airlines to change my flight, and it was simple as that.  Also, I was refunded the $511 fuel surcharge since I would no longer be flying with British Airways, which brought our total costs to 50,000 points and $5.60 each to fly business class to Berlin!  There were a few kinks in their system that disturbed my check-in process, but I got it all cleared up at the check-in counter at the airport.

The business-class pampering began at the Admiral’s Club in SFO as we waited to board our flight.  It was 6:30am and we started our day with breakfast.  Chris also got a complimentary Bloody Mary. 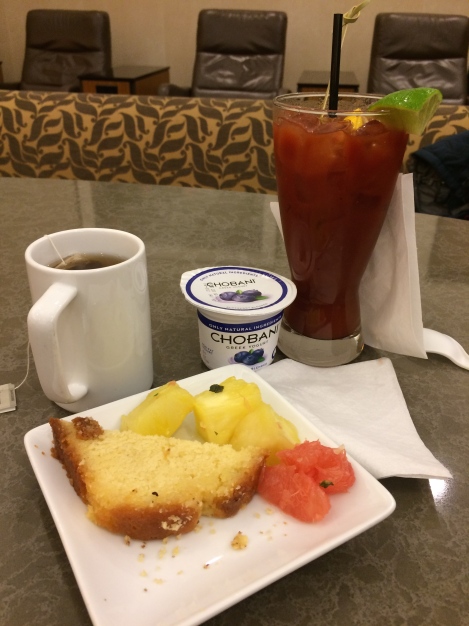 We made sure to not stuff ourselves too much at the lounge, because we knew there would be more breakfast on our first leg to Chicago.  Steel cut oatmeal with fruit and granola: 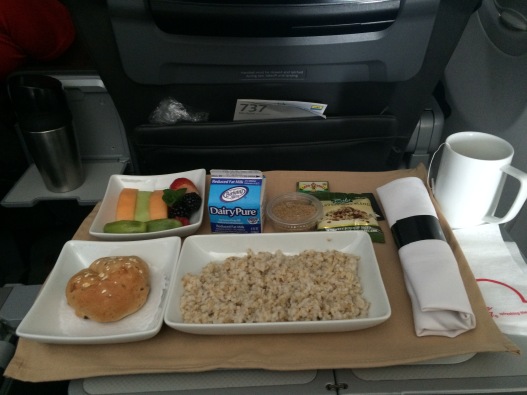 Once in Chicago, we stuffed ourselves silly at another lounge while waiting to board our next flight to Berlin. 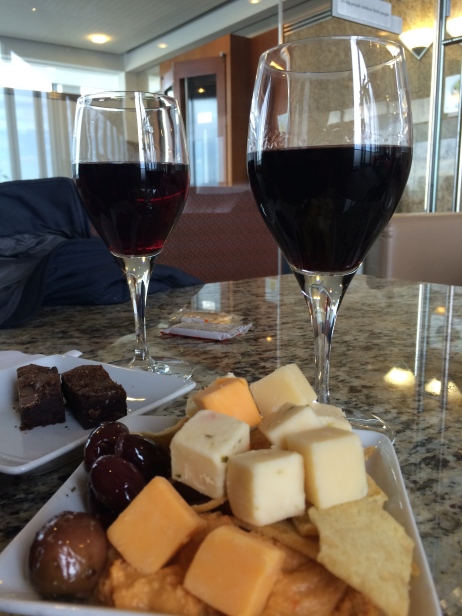 The plane to Berlin was incredibly empty.  Not even business class was full. I’ll bet that everyone in the economy class enjoyed an entire row to themselves.  Well, here were our individual seats in business class: 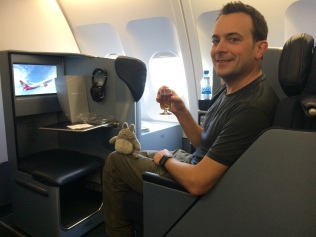 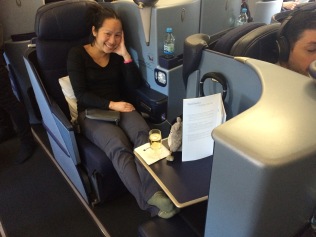 Albeit slightly cramped with an odd configuration, we enjoyed our 8-hour flight to Berlin. I mean it was still business class! Can’t complain there.  The best seats in the business class were all taken (the very private window seats), so Chris ended up with the aisle-window and I got the aisle seat.

As soon as we were seated, we were given complimentary champagne.  Then we dove into the menu for dinner and breakfast. 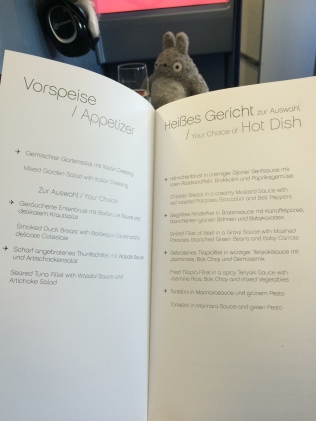 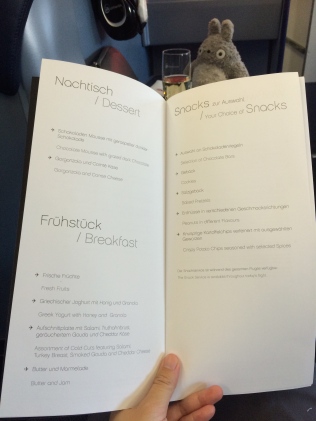 Then I checked out the amenity kit, which included an eye mask, ear plugs, lip balm, lotion, socks, a tooth brush, and some tooth paste.  A flight attendant later passed out slippers (yay!). 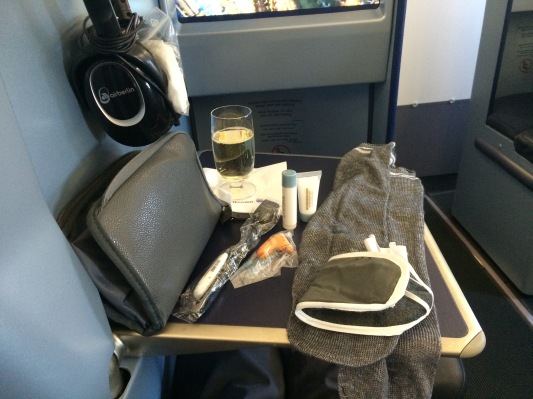 Shortly after takeoff we were served another beverage of choice (I got the rosé wine) and nuts.

Then I played around with the seat configuration.  Not too difficult to figure out. 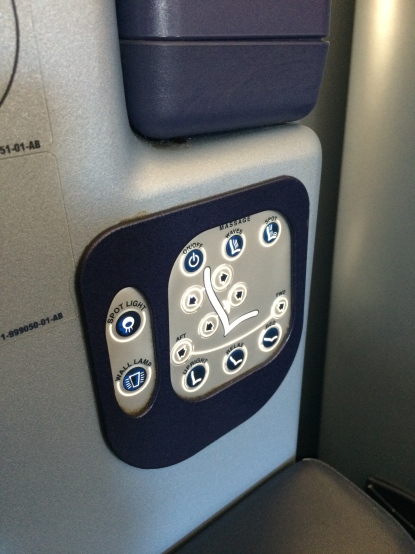 About 30 minutes after takeoff, they served dinner.  Because I read that the food on Air Berlin wasn’t memorable, my expectations were low.  However we were both impressed with the presentation and the food!  To start, we both had salad and smoked duck.  Tasty! 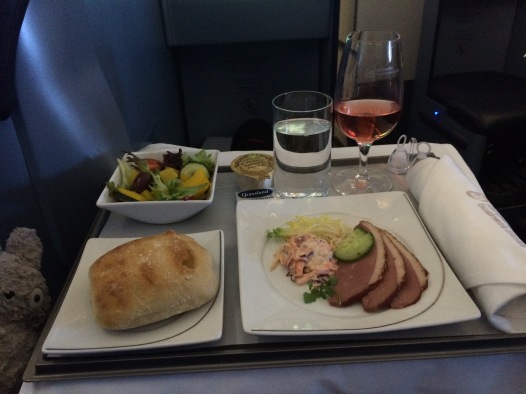 Because I had just regrettably stuffed myself at the lounge in Chicago, I had to skip the main course.  Chris opted for the beef and potatoes, which he claimed was delicious. 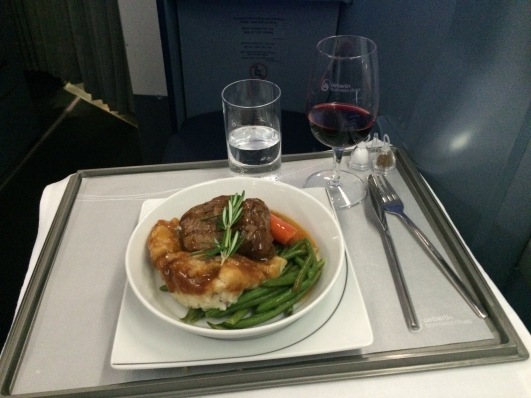 There was no way I was skipping dessert though. Chocolate mousse for both of us! 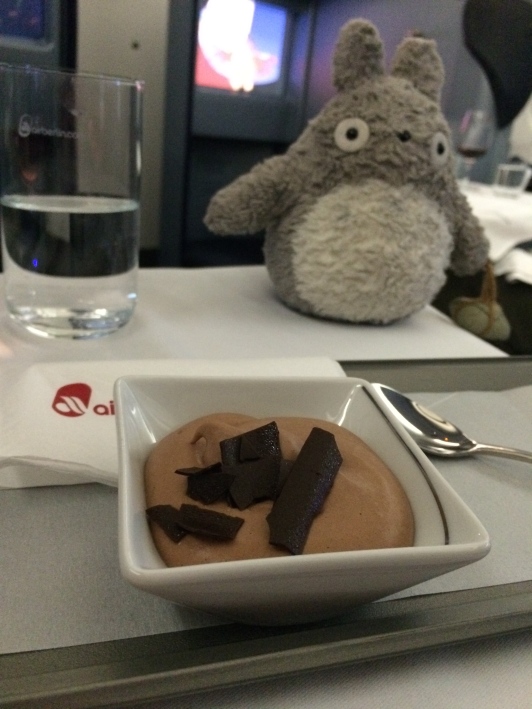 Immediately after dinner we attempted to sleep.  Our arrival time to Berlin was 7am the next day, so it was important to get adjusted.  Unfortunately our bodies thought it was 2pm PST.  None of us got any decent sleep.

Naturally we were already awake for breakfast.  We were still stuffed, but, as always in any business or first class flight, we devoured as much as we could.  Breakfast was a simple plate of cold cuts, cheese, bread, fruit, and Greek yogurt. 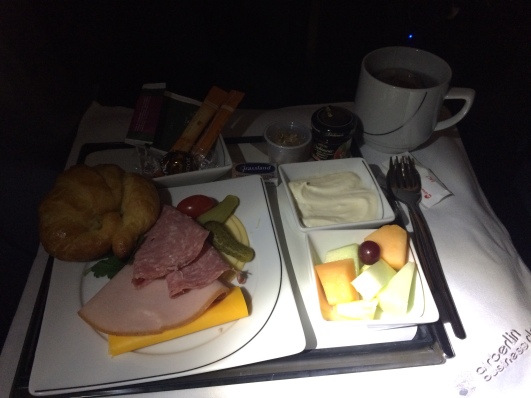 And thirty minutes after breakfast, we touched down in Berlin!

The food and service was great.  Now if only American Airlines could make their AAdvantage Awards seat selection a less painful experience…

This entry was posted in Uncategorized and tagged air berlin. Bookmark the permalink.