It seems as if most people traveling to Egypt only have enough time to check out the “must-do’s” which include the Great Pyramids of Giza, the Egyptian museum in Cairo, the magnificent archeological sites in Luxor and further to the south, and the handful of souqs and bazaars tucked in the cities. Once we exhausted the list of “must-do’s” in a brief two weeks, we spent our final 1.5 weeks in Egypt doing what we wanted to do. This not only entailed travel to Egypt’s lesser known natural landscapes, but also the wonderful void of giant tour buses and aggressive touts. Doing what we wanted to do ended up being a relaxing “vacation” to conclude our 3.5-week trip in Egypt.

As it was December, we longed to plow through some sand via jeep safari in the breathtaking White Desert for Christmas. I almost opted to skip the White Desert, but upon telling a native Egyptian friend my plan, he exclaimed, “But the White Desert is incredible!” We were obliged to visit the desert after that remark. Due to its remote location, the need for an off-roading vehicle, and security level concerns, there isn’t an option to tour the White Desert independently. Even if there is that option, I couldn’t recommend it; it would take forever to find the landmarks and you’d probably get lost.

Upon online research I discovered the highly-rated Hamada, a local Bedouin who offered tours within the vast White Desert. Travelers can pick their own itinerary from 1 day to a month, but it seems as if the most popular tours range from 2-4 days. We opted for 3-days/2-nights, at the rate of 4,400 LE (~$230) for 2 people. While we thoroughly enjoyed our trip and loved the hospitality of Hamada, we did discover later on that White Desert tours could also be booked at budget hostels in Cairo (i.e. Dahab Hostel or One Season Hotel) for roughly half that price. If you want a guaranteed excellent time, Hamada will make that happen; however, I can’t imagine how any tour company could mess up this jeep safari tour…but hey, it’s Egypt! 😉

On Day 1 a driver picked us up at 8am at our Cairo hotel and drove us 4 hours to the Bahariya Oasis where we would begin our White Desert tour. There, we joined a family of three also touring the desert. Before setting out for nowhere, we chowed down on a homemade lunch prepared by our Bedouin drivers. 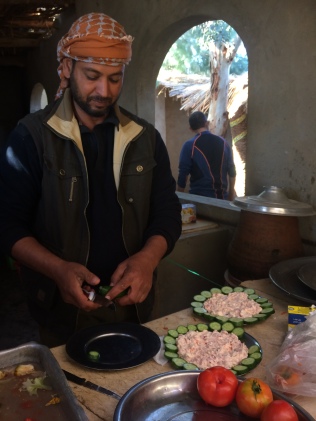 After lunch we set off from Bahariya Oasis to the White Desert and made several stops at natural landmarks along the way.  A quick visit to the Black Desert:

The highlight of Day 1 was the valley of El Agabat.

Immediately after plunging through the valley, we parked and set up for camp.

Our drivers set up the common area where meals were served. The bright colors of the fabric are quite festive, don’t you think? 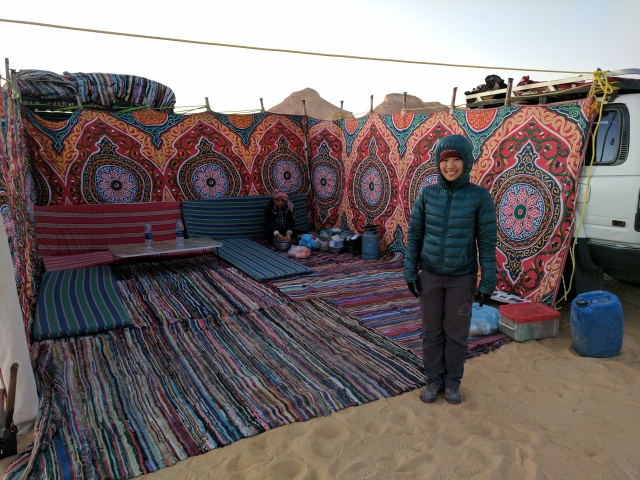 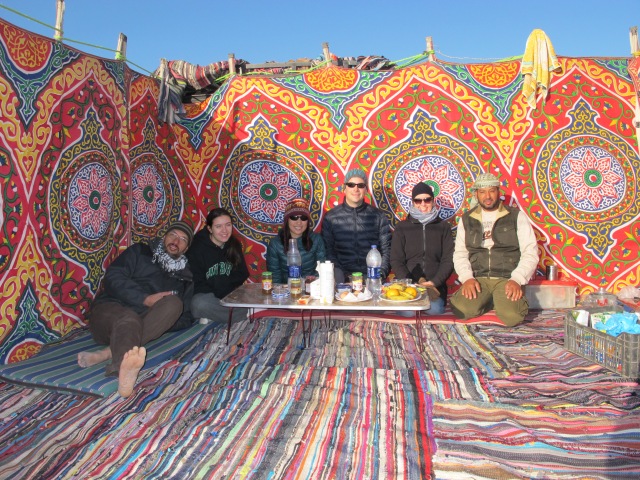 We even had the option to sleep in the common area after the tables were cleared, literally under the thousands of stars, buuuut it was so damn cold that night we chickened out and opted for a pop-up tent instead. Between the thick mattress pads, sleeping bag, and three layers of camel wool blankets, it was surprisingly toasty. The darkness, silence, and glistening stars were surreal compared to the chaos of Cairo the night before.

In the morning after breakfast and breaking down camp, we set out for a full day of desert exploration.

We finally had the opportunity to view the magical white of the White Desert. 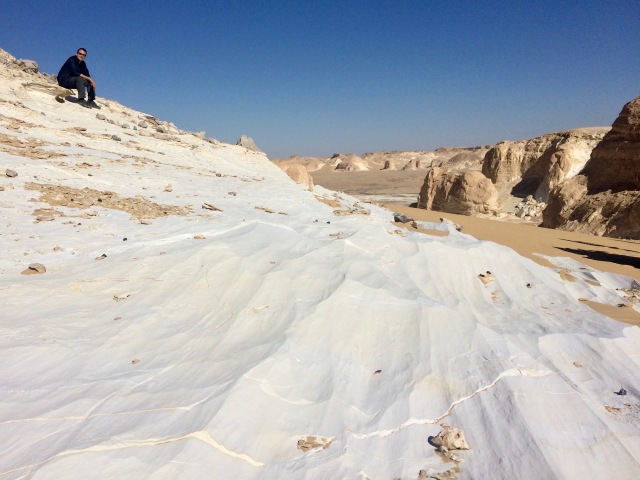 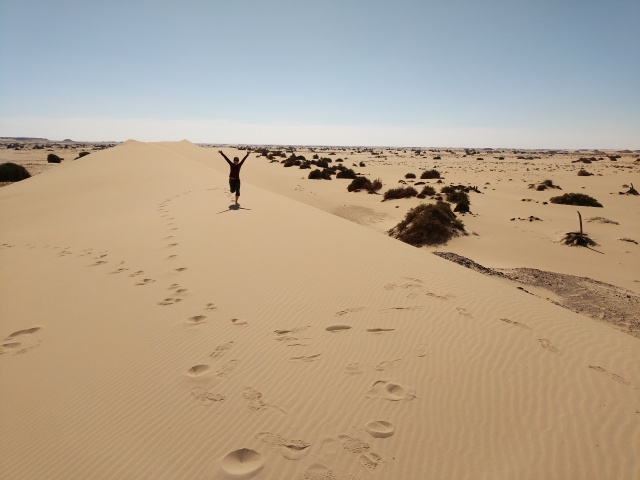 Perhaps the most amusing site is Magic Springs, literally a small oasis smack in the middle of nowhere. We’ve all seen cartoons and comics of a nomad with his camel stumbling upon an oasis in the desert; well, it turns out that these random oases actually do exist. 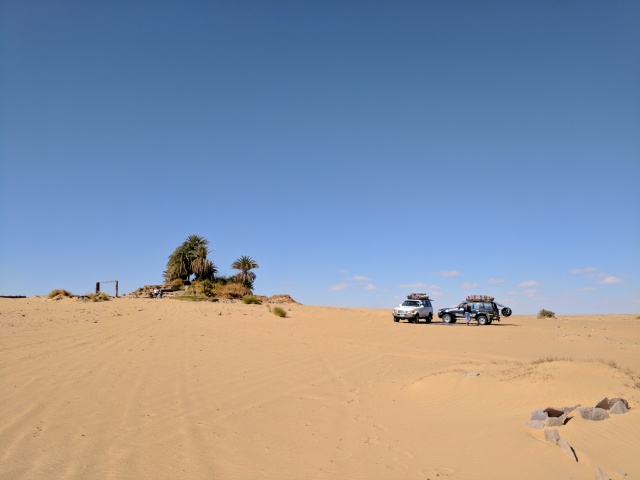 Bedouins have known about all the oases in the White Desert for hundreds or thousands of years.  Some have even built a structure around them to create isolated pools of water. We assume the camels drink from the lowest pool.

We lunched beside Magic Springs and then continued our safari into the heart of the White Desert.  To our disbelief, we learned that the entire White Desert was once an ocean bed, as evidenced by the thousands of shell and clam fossils strewn about. Now instead of an ocean bed, the desert is filled with incredible white rock formations made of chalk. 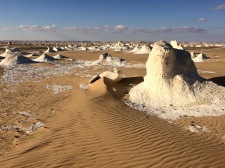 It was a different kind of white Christmas.

Our last meal in the White Desert:

That night we decided to sleep out in the open under the stars. While Chris had slept under the stars as a boy scout, I never had.  Four thick camel wool blankets kept us incredibly warm despite the near-freezing temperatures. Every now and then in the middle of the night I peeked out from under the blankets to catch a glimpse of the stars. I even witnessed a pink and purple sunrise from my blanket, just for a few minutes before the cold could numb my face. If you ever have the opportunity to sleep out in the open on a clear night, I highly recommend it!

The next morning after breakfast we made one final excursion to a cluster of giant mushrooms and a small chick. This chick resembled a marshmallow peep Easter candy. 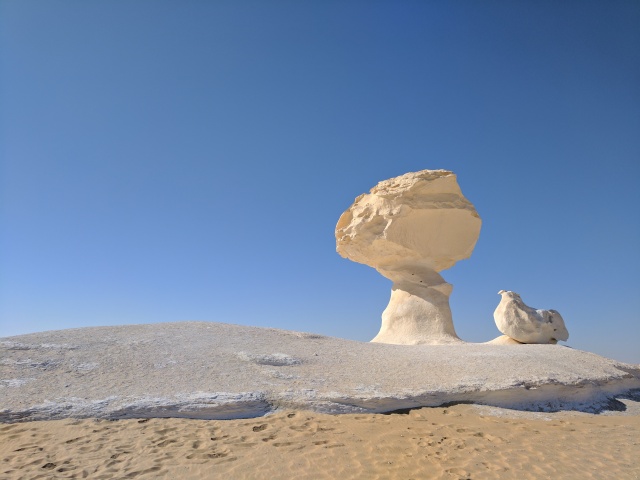 The mushrooms concluded our tour of the White Desert. From there it was a long drive back to Bahariya Oasis, and then another incredibly long, exhausting drive back to Cairo.

After having visited 25 of 60 national parks in the US, I assumed the White Desert wouldn’t have been able to leave a lasting impression. Clearly, I was wrong.  Climbing up and diving down through steep sand dunes, witnessing ancient desert oases, climbing upon mysterious chalk and rock formations, and sleeping under the stars all amounted to an unforgettable outdoor adventure. Now I tell everyone that no trip to Egypt is complete without a Bedouin safari to some of the most remote parts of the country.

3 Responses to A White Desert Christmas