It was easy to assume that we’d be disgusted with another major Moroccan city after our distasteful experience in Fes, but we were wrong.  While the cramped walls of Fes el Bali allowed scammers to corner their prey, Marrakech was open, widespread, and sprawling.

We didn’t do our research about what it meant to drive in Marrakech, but we’ve obviously survived the experience to be able to share it today.  To add to the suspense, we drove around the notorious Djemma el Fna.  During the evening.  On a Sunday.  With our oversized vehicle.  And this was after an exhausting day of driving down the dizzying Atlas Mountain range. Yes.  We know. Call it stupid or crazy.

Fortunately we had a destination: a large car park across the street from Djemma el Fna beside the Koutoubia Mosque for only 80 DH ($8.26)/night.  Naturally, it was full, and we ended up having to make 3-point U-turns within the cluster of cars, bicycles, and scooters, only to dive back into the mess of traffic and surplus of horse carts and carriages.  Traffic signals existed, but everyone ignored them.  Pedestrian crosswalks also existed, but waiting for pedestrians would have meant waiting a lifetime.  As we crept forward inch by inch, we were engulfed in constant motion, and had to assume that we weren’t knocking over anyone.  It was truly a game of survival of the fittest. At the end of the day, we were the bigger vehicle and knew it was everyone else who had to be more wary, not us. We didn’t have to venture far to look for parking; an entrepreneur waved us down and offered us a spot in his tiny, private lot for the night, also for 80 DH. When all was calm and in order the next morning, we moved to the original car park of choice.

Like in Fes el Bali, the beautiful sites of interest were all within walking distance; however, unlike Fes el Bali, exploring them independently did not end up with stalkers demanding a tip.

First, we dropped into the Saadian Tombs, which was surprisingly small. 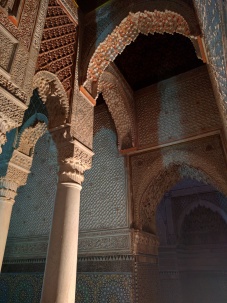 Not far from the tombs was the Bahia Palace, a decent sized complex of courtyards and gardens. The intricate details of Islamic architecture were astounding. 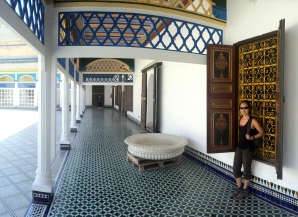 After a quick lunch break we headed toward the Ben Youssef Madrasa via the maze of souks. Here, the labyrinth of shops resembled Fes el Bali, but not as congested.

Not only were there displays of colorful handmade goods, but there were also “districts” of carpenters, dyers, metal workers, carvers, weavers, you name it. Amidst all the shops we were able to admire all the men at work. We had excellent sneak peaks of bleached wool, leather sole-makers, and welders. 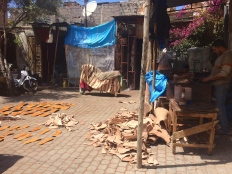 Beyond the souks was Ben Youssef Madrasa, once an Islamic college and the largest college in Morocco, now a historic site. Personally, of the tombs, palace, and madrasa, I favored the madrasa most, probably due to its vast open-air courtyard with plenty of shady corners to linger within.

I save the UNESCO site and outdoor market of Djemma el Fna for last. During the day it appears to be any open-air market, but once the sun begins to set, a whole new world settles in. Boisterous drummers and dancers with their vivacious beats fill the eyes and ears with spiritual energy, vendors and shopkeepers fill all empty spaces on the tiled square, and more importantly, the surplus of juicers and food vendors compete wildly for the gawking customer. Despite all the raucous noise and festive atmosphere, the most captivating of all is the sizzling smoke and intoxicating aroma of the food (skewered meats, tajines, roast chickens, and more). Unfortunately, this is still all a tourist attraction, meaning tourist prices and ridiculously small portions. Upon glossing over a menu and taking into account one tourist’s disappointing meal experience, we opted not to eat at the pricy food stalls. We did, however, enjoy a pricy beverage on one of many terraces overlooking the Djemma el Fna at dusk.

Overall, we found Marrakech to be rich, fascinating, and beautiful.