You’d think Morocco’s largest city would live up to its fame from being one of America’s greatest classic movies, but that is sadly not the case. With the exception having the beautiful name of Casablanca, there is nothing spectacular about the city, except for the famous Hassan II Mosque, the largest mosque in Morocco. If passing by when traveling along the western coast, the mosque is definitely worth the detour, but the city itself is not worth a multiple-day excursion.

Thanks to the relatively new toll road between Marrakech and Casablanca, the pleasant drive took less than 3 hours and cost about $15 with our class 2 vehicle. Navigating through town to the mosque was more cumbersome than adventuresome, but it was at least nothing compared to driving through the heart of Marrakech on a weekend evening.   To our surprise, there was plenty of parking all around the mosque, particularly along the coast. There were however touts demanding money for parking, but we ignored them and they left us alone. And finally after driving, parking, and walking, we made it to the towering Hassan II Mosque.

Pictures do no justice in describing the spiritual experience one feels from standing beneath the majestic mosque. But, I share my favorite photos below from up close and afar.

Parking with the motorhome: 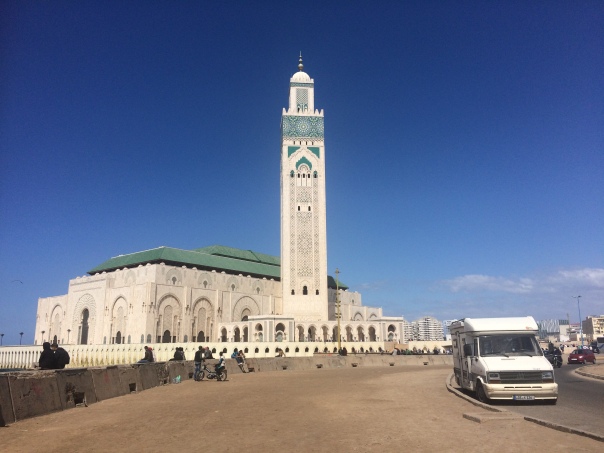 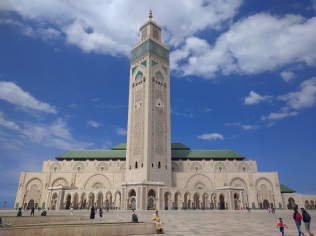 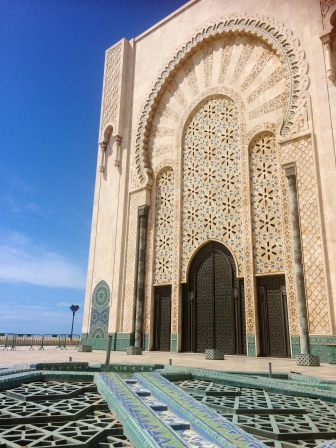 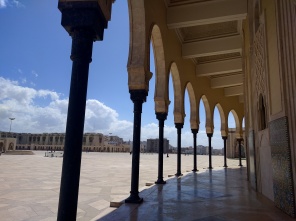 Unlike most mosques, non-Muslims can tour this mosque via guided tour for 120 DH ($12.37) per person. Tours are conducted 9am, 10am, 11am, 3pm, and 4pm. There is no queue or any concern about tickets; anyone can just show up at the designated time, pay the guide, and go on the 1-hour tour. We felt the price was steep and opted not to join the tour, but we definitely enjoyed our time strolling around the mosque and admiring its wonderful architecture. Overall, we were glad we made the detour to the Hassan II Mosque, but we were also glad that we left Casablanca immediately.

This entry was posted in Morocco. Bookmark the permalink.