One option to road tripping Spain was to drive along the entire coast, which would include Portugal’s scenic coast.  But I couldn’t pass up the trio cluster of cities in central Spain: Segovia, Madrid, and Toledo…Segovia for the ancient Roman aqueducts, Madrid for the lively cultural modern-day capital, and Toledo for the stunning fusion of religious structures.  Situated only a 1-1.5 hours drive apart from each other, visiting all three cities was convenient, easy, and surprisingly unique enough to differentiate themselves from one another.

Segovia was the first stop after Picos de Europa.  Even parking was a Spanish experience; there was a free RV parking lot located at Segovia’s old bullfighting ring. 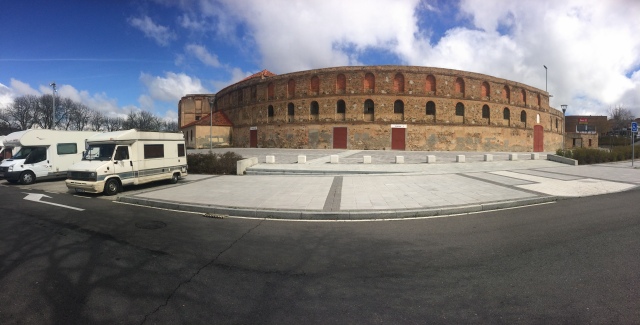 From the bullfighting ring it was an easy 20-minute walk to the ancient Roman aqueducts. We were even able to see the beginning (or end) of the aqueduct.

Pictures of Segovia’s historic highlight already wowed me, but pictures did not do justice to the real-life experience. Gazing up at its towering arches and marveling at its expansive length was surreal.

Other historic Segovia highlights included the Alcazar, once a royal palace that is now a military museum.  Its grandiose features were best viewed from afar.

Segovia’s Cathedral, the last gothic cathedral built in Spain, looked incredible from afar and up close. 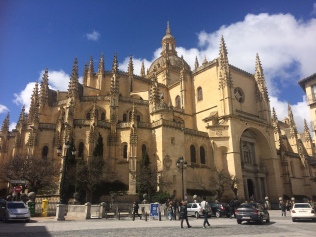 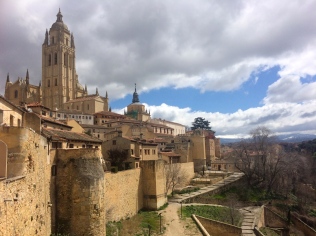 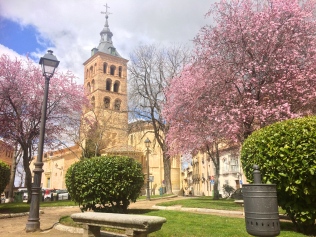 Walking from the south end of historic Segovia (the aqueducts) to the north end (the Alcazar) took much less time than expected–it was a tiny town after all!  Albeit compact, the variety of historic buildings and structures kept me entertained for the half day we spent there…but it was nothing compared to Toledo (more on that later)!

Next up was Madrid, the vivacious and bustling capital of Spain.  We parked our RV at a free parking lot here, and took the metro in.

To be honest, Madrid is a large, sprawling city…and is pretty much just that. Lively people such as locals, tourists, and tacky street performers fill the busy streets and plazas. 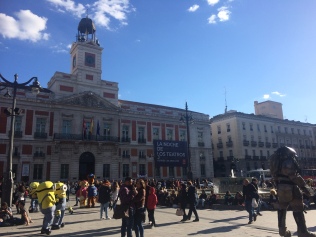 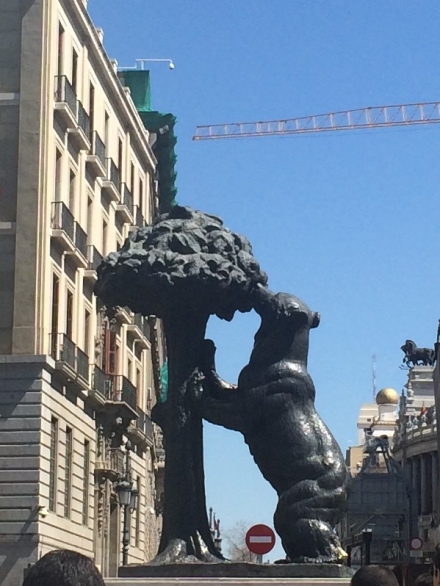 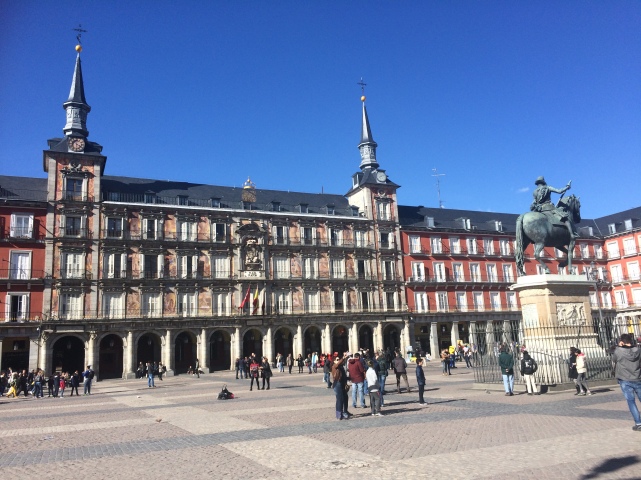 Madrid’s Royal Palace and the cathedral across from it: 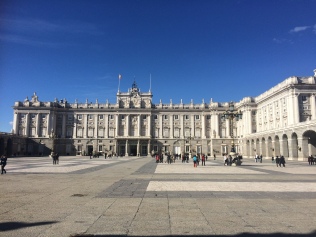 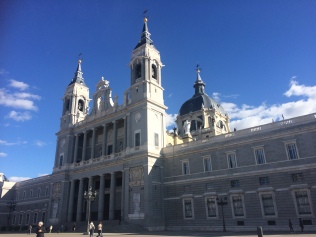 The Palace of Communication (welcoming refugees–YAY!):

Retiro Park is fantastic, especially on a gorgeous day. 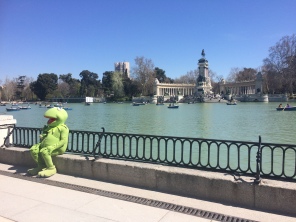 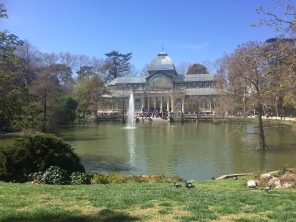 The nearby Puerta de Alcala:

Of course, we found aspiring bullfighters practicing their routine at a park.

We made a quick visit to the Museo Nacional Centro de Arte Reina Sofía, primarily for Pablo Picasso’s famous Guernica.  Free admission was offered 7-9pm on weekdays, and Sundays 1:30-closing.

Aside from plazas and the few ornate buildings, what Madrid truly had going for itself was its food…and by food I mean tapas.  Free tapas. Lots of free tapas.  Thanks to this site we basically filled up our tummies at the cost of cheap beer/cider.

In most if not all tapas bars, the bar man will hand-carve fresh ham directly from a pork leg.  These giant slabs of pork leg, by the way, could be found dangling in storefront windows throughout Madrid.  YUM! 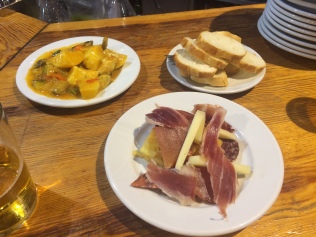 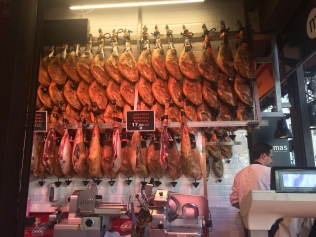 A special tapas bar slightly out of Madrid, Casa Pepe, is known for its delicious dry-fried chicken wings.  And it’s not just because their wings are tasty, but because people throw their chicken bones and napkins onto the ground.  The filthy floor alone made our trip out there worth it.  (But €6.30 for 3 plates of wings and 4 drinks was worth it too.) 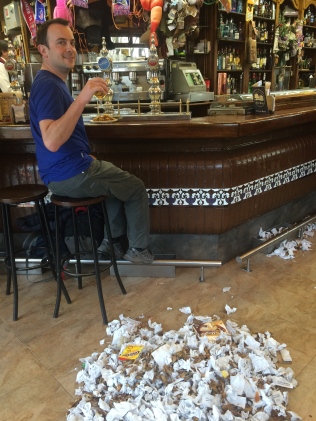 In addition to tapas, it was far too easy to indulge on chocolate and churros.  Chocolateria San Gines is dangerously open 24 hours.

Madrid fulfilled any expectation that comes with the big city life, with the major upside being food.  (There was also a surplus of art museums and all-night-long nightclubs if that’s your thing.)  However we ended up cutting our time in Madrid short and immediately set off for Madrid’s old capital, ancient and captivating Toledo.

Beyond Toledo’s medieval walls were breathtaking views of the city–the winding river that hugs the walls, the cathedral that pokes the sky, and the strategic alcazar that towers over the city.  Even on an overcast day, the views were striking. Photos from a sunny afternoon showcase even more magnificent scenery.

Like in Segovia, we didn’t bother driving into the city.  That would have been a nightmare. There was free RV parking just below the alcazar outside the medieval walls. 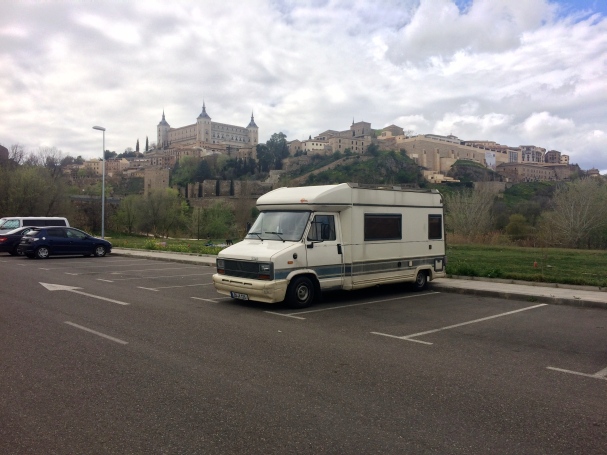 With its maze-like streets twisting and turning every few meters, getting lost was not only expected but entertaining.  More importantly, Toledo’s dazzling history of Muslim, Jewish, and Christian faiths flourishing after one another meant a fine collection and fusion of mosques, synagogues, and cathedrals which meant there were simply too many sites to visit.  This resourceful site helped me determine which landmarks to visit, and also became my guide throughout the city.

The Cathedral of Toledo, Toledo’s most important structure and one of Spain’s most significant Christian landmarks (also with the longest lines in Toledo!): 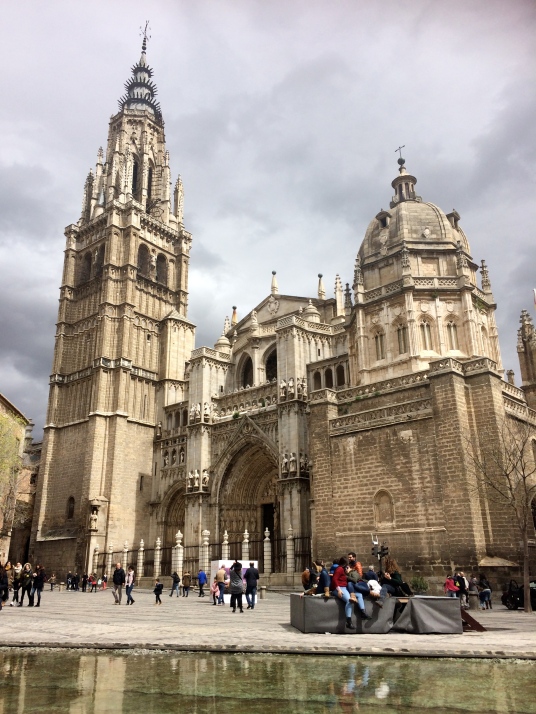 Cristo de la Cruz, an Arab mosque in the year 999 which was later converted to a Christian chapel in the 12th century:

Iglesia de Santiago del Arrabal, an Islamic-style structure that is now a church:

Between Segovia, Madrid, and Toledo I was content with enjoying most landmarks from the exterior.  We couldn’t squander our money on all the historical landmarks; we are budget travels after all.  Our money ended up being more happily spent at the next bar…mas tapas y cervezas por favor!

This entry was posted in Spain and tagged madrid, segovia, toledo. Bookmark the permalink.