Less than an hour’s drive, the monastery retreat to mountaintop Montserrat is perhaps the most popular day trip from Barcelona. With all the options of transportation (train, cable car, funicular, private car hire, and bus tours) it’s no wonder that this excursion is a touristy one. To the Catalonians and Catholic pilgrims the monastery is a significant site, and to the tourists like me the monastery’s setting of rock formations is a day trip of scenic hiking.

In order to experience Montserrat in peace, we opted out of the cable car and funicular. We could have driven up to the monastery and paid €6.50 to park in the crowded parking lot, but we opted out of that too. Instead, we parked at the bottom of the hill in Monistrol de Montserrat for free near the train station (Cremallera) and followed trail markers up to Montserrat.

View from where we parked (yep, we hiked to the top of those rocks!): 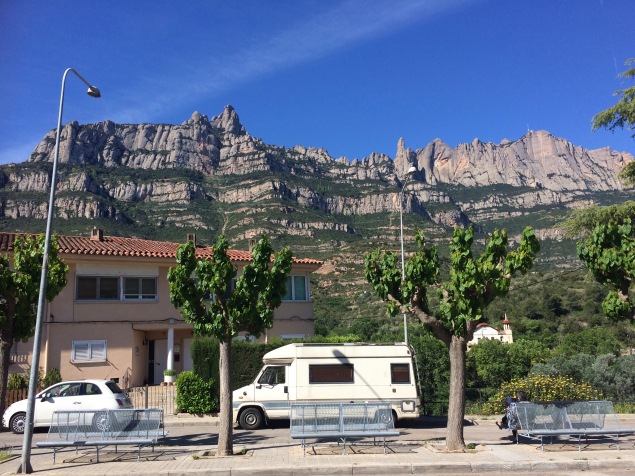 The climb from Monistrol de Montserrat to the monastery was well-marked and took us 1 hour and 10 minutes.

The funicular station at the top:

A Gaudi-style statue of a monk with a rosary:

In and around the monastery were long lines to see the Black Madonna, and hoards of tourists and their selfie sticks. We didn’t stay too long.

I looked forward to climbing the Stairway to Heaven, but unfortunately it was fenced off to prevent troublemakers like me from climbing it. Oh well.

After a brief peek around the monastery we continued our climb up to Montserrat’s highest peak, Sant Jeroni. This trail/footpath was well traveled and well marked, and incredibly popular. Rock formations at the top reminded us of national parks back in the U.S. Despite signs claiming a 1 hour and 45 minute ascent, we summited in 1 hour and 5 minutes—faster than our hike from Monistrol de Montserrat to the monastery! Keep in mind we were still incredibly exhausted/hungover from a weekend of partying in Barcelona.

From Monistrol de Montserrat to the monastery, and from the monastery to Sant Jeroni, we climbed over 1,000 meters in 2 hours and 15 minutes. Our descent took less than 2 hours. If you are reasonably healthy and fit, I recommend skipping the funicular and cable car. Go hiking instead! On a clear day like ours, you’d be able to gaze at the Mediterranean to the east, and the French snow-capped mountain range border to the north. It’s really the hiking, the rock formations, and the mountain top views over Catalonia that make this day trip worth it.

This entry was posted in Spain and tagged sant jeroni. Bookmark the permalink.