Remnants of Islamic rule can be seen throughout Andalusia, and nothing says it more than the defining piece of the grand Alhambra. Originally the structure was a small fortress built on top of Roman ruins in the 9th century, and then later those fortress’s ruins were rebuilt into a palace in the 13th century by the Moors. This renovated palace became a royal palace, but by the end of the 15th century after Christian reconquest, the royal palace became the Royal Court of Ferdinand and Isabella. By the 16th century, the palace/fortress was given a bit of Renaissance flair. Although further renovation was commissioned, it was never followed through and the palace eventually became ignored, neglected, and fell into disrepair for centuries. Fortunately the Alhambra was rediscovered and is now one of Spain’s most famous sites.

They say it’s Spain’s most beautiful and most visited monument. They say it cannot be described with words. They say that it’s Islam’s greatest architectural achievement. What they don’t say is that tickets sell out months in advance. Fortunately there are a small number of tickets available each day, which sell out not long after doors open at 8am. That means the queue begins before sunrise!

Perched atop an isolated hill and overlooking the cramped city of Granada, the Alhambra’s only parking options were the expensive 24-hour parking lots on site. The max price for cars was €18, but the max price for motorhomes was €29.60. And this was for the low season, which was through April. Had we arrived a week later, the max price for motorhomes would have been €54! YIKES! Because we had to sleep in the parking lot in order to queue super early in the morning, we figured €29.60 wasn’t too terrible. At least that was convenient.

We got up at 6:15am, left the parking lot at around 6:45am, and arrived to the already longish line at 6:55am. Wow. It was cold and dark, and we began to wonder if the Alhambra would be worth all the hassle. €29.60 for parking, getting up super duper early to queue, only to hope to get tickets? Hm…

At around 7:40am, an Alhambra employee told everyone that there were ticket machines on the other side of the building and its lines were shorter (though the machines tacked on an extra €1.40 surcharge to the €14 ticket). Several people got out of line (including Chris) and beelined to the ticket machines. Good thing he did because after the doors and ticket machines opened, Chris purchased tickets before I was even close to the doors.

Note that ticket sales for the day begin at 8am. All morning tickets (8am-2pm) were sold out by 8:10am (I heard that there were only 60 morning tickets anyway), and Chris purchased our afternoon tickets (2pm-8pm) by 8:15am. Visitors can only enter the Nasrid Palaces at a specific time, and our assigned time was 5pm. We most likely scored the last 5pm slots, because two women immediately after Chris were left with the 6pm slots. This was particularly important to us because we had planned a 3-hour drive after the Alhambra!

In any case, we were grateful to have scored tickets after the whole ordeal.  Considering we got the afternoon tickets with the 5pm time slot for the Nasrid Palaces, they were probably almost sold out by 8:15am! And the line behind us was still amazingly long, even during the shoulder season on a Monday. My advice is to start queuing at 6:30am.

Anyway, we obviously had time to kill between 8:15am and 2pm, so we walked down into Granada and up to Mirador de San Nicolas. Supposedly the best views of the Alhambra were from this mirador, but the early morning light casted unfavorable shadows across the façade. Views from the late afternoon would have been better.

We entered the Alhambra at 1:50pm, giving us three plentiful hours to explore Generalife, Palace of Charles V, the Alcazaba, and all the wonderful gardens, fountains, and plazas before our 5pm time visit to the Nasrid Palaces. I had been hesitant the entire morning about the whole ordeal, wondering if our efforts would result in a disappointing shoulder-to-shoulder, crowd pushing experience like in France’s Palace of Versaille. But not long within entering, I discovered it would be nothing like that, for the space was so massive, so spread out, and so refreshing that congestion could not exist within the Alhambra.

First we headed to the Generalife Palace Gardens, a heavenly display of flowers, trees, and fountains. Late spring meant the sight of colorful flowers and the aroma of wisteria and orange blossoms; we did not hesitate to sit on one of the dozens of park benches scattered throughout the gardens. From the palace we were able to frame and gaze at the lovely views of the Alcazaba. 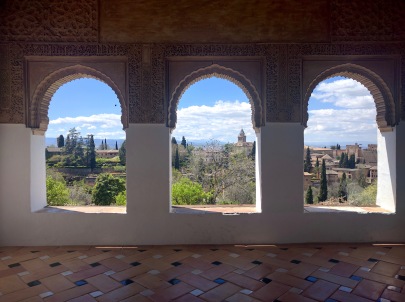 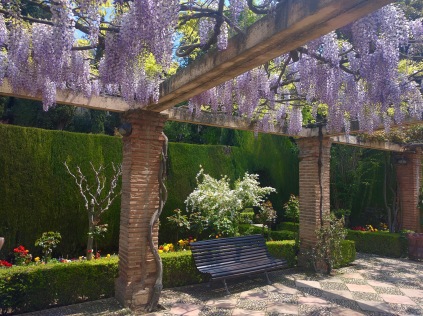 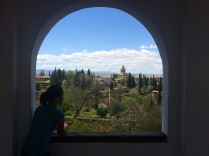 Then we proceeded to the indescribable Palace of Charles V.  With an exterior so remarkable and so square, I never would have guessed that the interior was an outdoor circular patio.  This palace took my breath away. 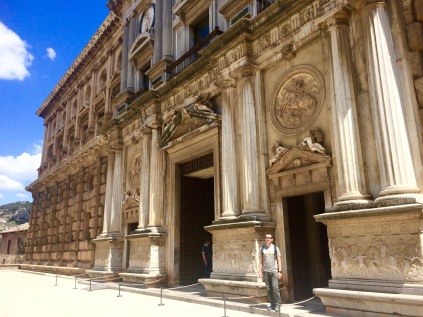 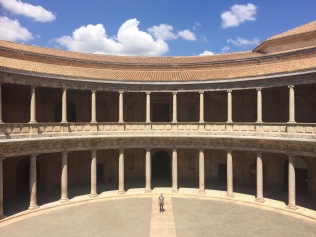 Next, the Alcazaba, Alhambra’s fortress.  From there, incredible panoramic views of Granada’s white-walled city could be seen. 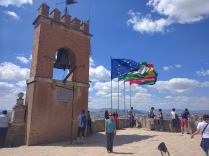 And finally, the grand finale of the Alhambra–the Nasrid Palaces.  At first I didn’t expect to be too wowed by the Moorish palaces since we just returned from Marrakech and Casablanca, but I’ll admit I was still blown away.  The Nasrid Palaces were the grandest of the grand of Islamic architecture, with even more intricate details than any of the sites in Morocco.  Add the wonderful renovation, preservation, and Renaissance touch of manicured gardens, and it was the most stunning fusion of European and Arabic. 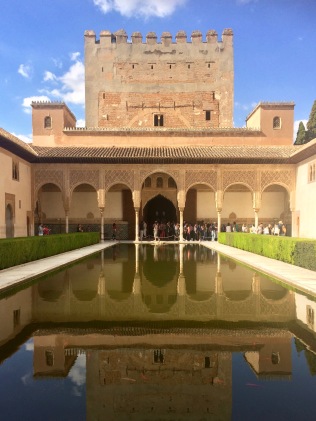 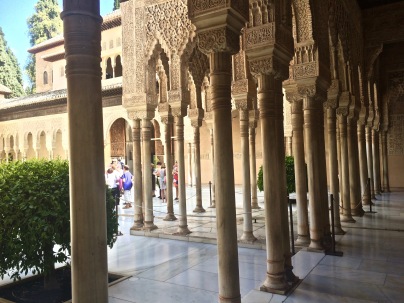 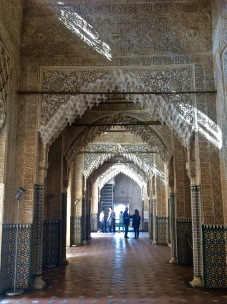 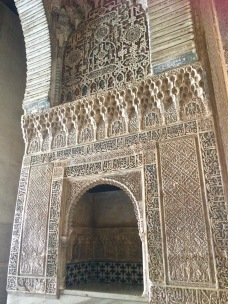 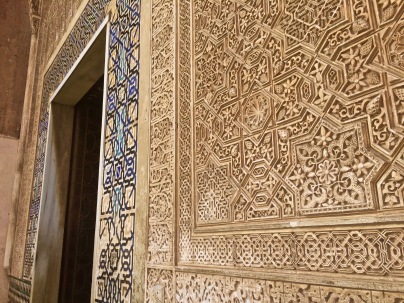 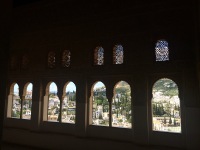 Yes, the Alhambra was worth the parking, the lack of sleep, the effort, and the €15.40 admission fee.  Considering the Alhambra is a massive complex consisting of multiple monuments, the price tag was astoundingly cheap.  In Sintra, it cost between €8- €14 for each garden, palace, and fort we visited, totaling to over €30 per person.  We’re amazed how inexpensive the Alhambra’s admission fee was, not just because of its number of spectacular sites but also because of its popularity.  And best of all, despite being one of Spain’s most popular attractions, it didn’t feel overwhelmingly crowded.  With all the parks, benches, fountains, gardens, and trees, it was easy to stroll at a leisurely pace to relax and soak it all in.  So will the fastidious, snotty, been-there-done-that me say the Alhambra de Granada was worth it?  Absolutely.