It amazed me that even rest stops in Switzerland could be so beautiful.

After two consecutive days of relatively challenging hikes, we needed a chill out day, and little did we know we’d spend most of it at the massive rest/trucker’s stop in Martigny.  Equipped with a gas station, motorhome servicing station, free bathrooms, a restaurant/market with electricity and free water inside, and a gorgeous lake and trails, it wasn’t difficult to squander an entire afternoon there. I repeat, this was a REST STOP.

Once we were well rested we attempted to drive up Sanetch Pass for more epic hiking, but we quickly discovered the pass was still closed.  Whoops.  Next plan? Lake Geneva, specifically Montreux for Chateau Chillon, followed by a couple factories in Gruyeres and the charming Swiss capital of Bern.

Thanks to less than stellar weather, the low season, and it being a random weekday, free parking was plentiful around Montreux.  We parked near the Territet train station, strolled along the gentle lake to Chateaux Chillon, and soaked in the views. 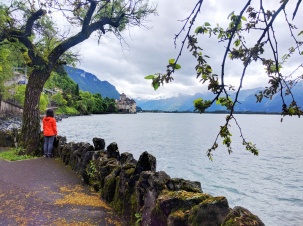 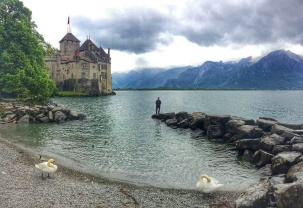 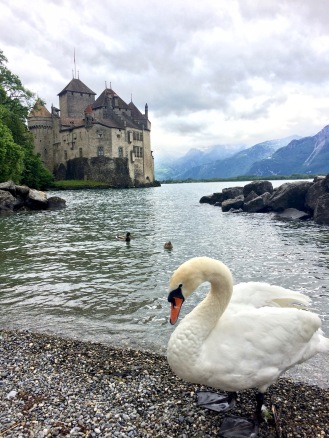 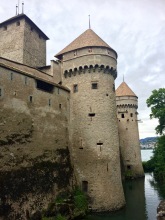 Upon returning to our motorhome we made the last-minute decision to head to Gruyeres for some cheese and chocolate.  Driving out of Lake Geneva provided awesome views:

Because I read La Maison du Gruyeres (the Gruyere cheese factory) was more interesting to visit in the morning, we chose to visit Maison Cailler (the chocolate factory) that afternoon.  For 12 CHF per person, we walked through a cheesy, theatrical “tour” that showcased the history of chocolate.  Albeit more amusing for children, we still enjoyed the end of the tour, which featured an all-you-can-eat chocolate tasting.  Needless to say, we felt pretty sick after devouring the limitless chocolate. 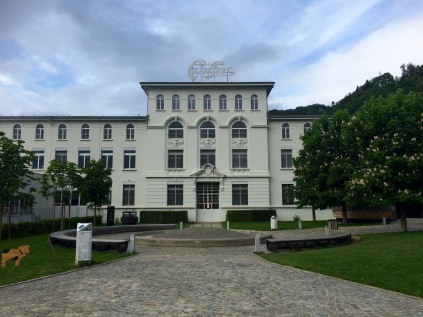 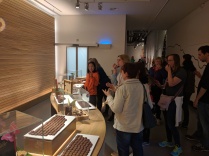 Thanks to long days of sunshine, we even had enough time after the chocolate factory to go on a short hike along the gorges of Jogne.  The trailhead was also not too far from the chocolate factory.  I wouldn’t call the hike a spectacular hike, but it was definitely a pleasant after-work stroll that was popular with the locals.  With the recent rainfall, the waterfalls were gushing, the river was boisterous, and the spray was rampant. 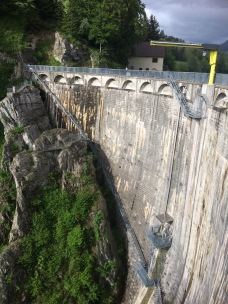 Everyday from 9am to around 11am, the cheese “experts” (more like young men between 18-22) go about their daily cheese-making tasks.  Fascinated by the gruyere cheese-making process, we remained for 1.5 hours to watch the mixing, solidifying, pouring, labeling, and pressing of the cheese mixture.  Outside of these hours, you’re probably better off not visiting the cheese factory at all since all the workers will have finished their work.  Regardless of whether or not you watch the process, the entrance fee is still 7 CHF per person. (Fun fact: The USA is the 2nd largest consumer of gruyere cheese in the world, after Switzerland!) 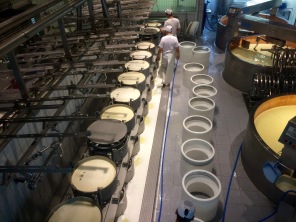 We headed for Bern after the cheese factory, which was only about an hour’s drive north. Traveling and driving in a tiny country meant less driving!  But because our reason for visiting Switzerland was to hike and hike some more, and because Swiss cities were just so freakin’ expensive, our time in Bern was extremely limited.  The sole campground outside of Bern cost 41.50 CHF/night for two people, and the costs of just about anything else in the city such as snacks and beverages made me cringe.  Like in Rome, our goal was to “see as much as possible in a day and get the hell out” but for a different reason.  There were no tourists to dodge, but there were prices we didn’t want to pay.

Fortunately most of the “must-see’s” were free.

The beautiful flag-lined streets of the historic center, with an astronomical clock tower: 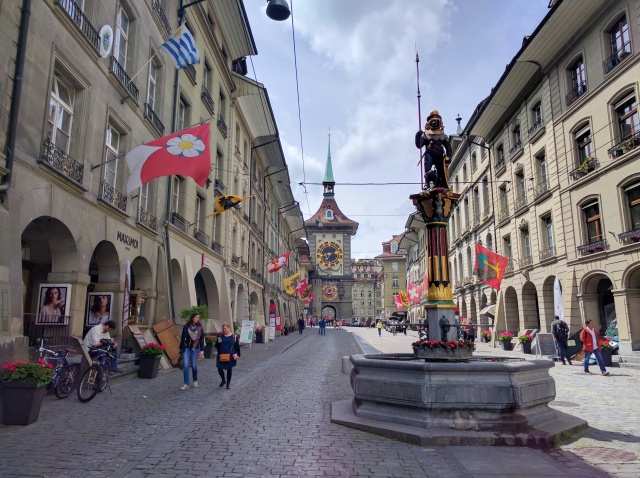 Bern’s cathedral, which was under much renovation: 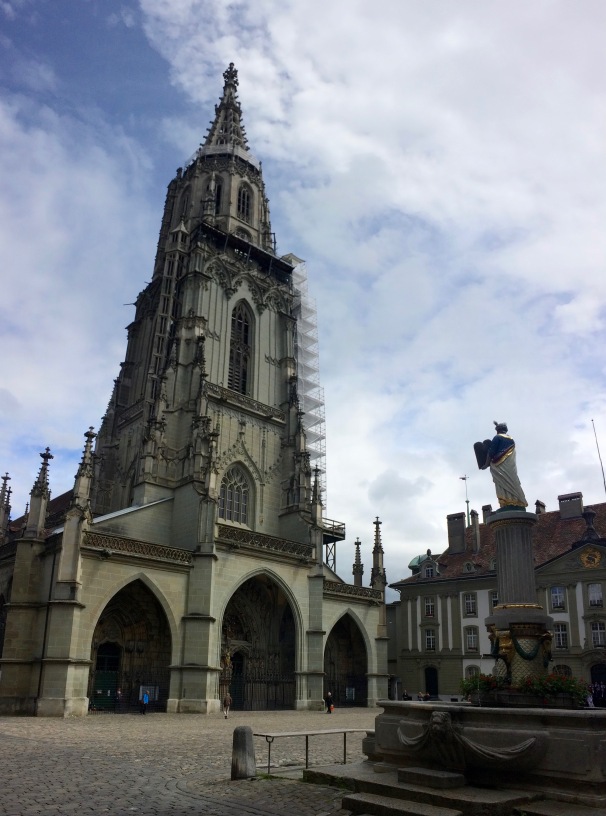 Bern’s “bear garden,” because apparently the bear is the symbol of Bern:

Walking along the outskirts of the historic center, taking in the beautiful cityscape: 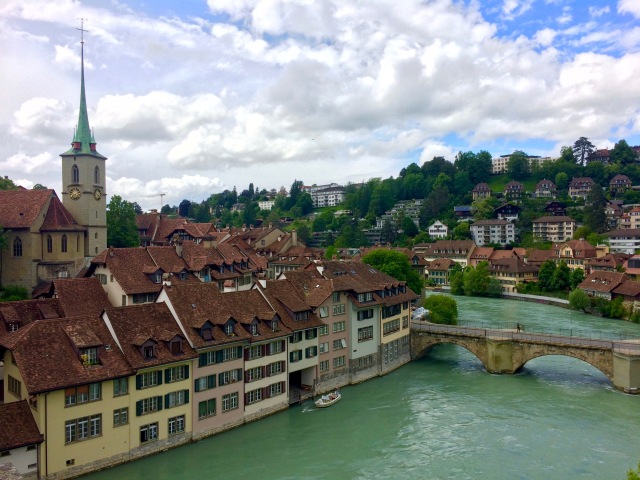 And finally, fondue.  We couldn’t go to Switzerland without trying cheese fondue, even if it meant a hefty price tag of 25 CHF per person!  I hate to admit–it wasn’t amazing, and we would have rather spent 50 CHF on an amazing dinner elsewhere instead of a pot of melted cheese with a side of bread, potatoes, nuts and ham.  I learned that I’d rather consume the pungent gruyere cheese in smaller quantities.  But hey, at least I can assure everyone that I consumed plenty of gruyere cheese (melted and unmelted) while in Switzerland. 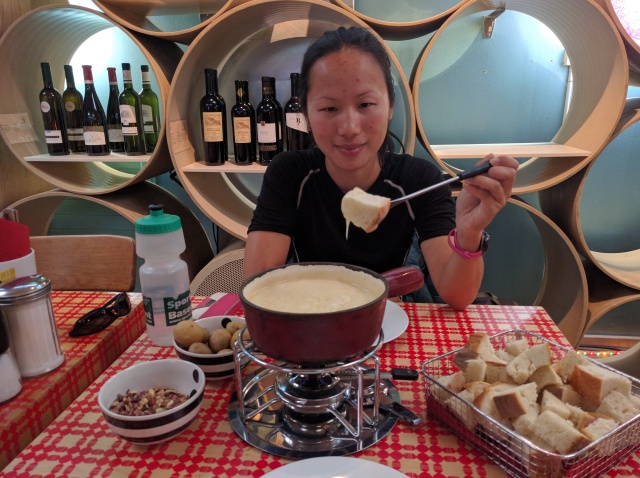 Martigny, Montreux, Gruyeres, and Bern were the western-most towns and cities we visited in Switzerland, and all definitely had their fair share of tour groups and buses. We didn’t mind taking a break from hikes to visit Chateau Chillon, Switzerland’s most visited historic monument, or tour chocolate and cheese factories, or stroll through the country’s charming capital.  Switzerland’s cities are nothing compared to the tourist-overrun cities such as Paris or Rome, and that is icing on the cake.

This entry was posted in Switzerland and tagged chateau chillon, gorges of the jogne, maison cailler, maison gruyere. Bookmark the permalink.

2 Responses to Montreux, Gruyeres, and Bern