There isn’t a whole lot to do in Lake Como, which is ideal because all everyone wants to do is sit, relax, gaze at the remarkable scenery, and think about how they are so lucky to be in such a beautiful place.

Lake Como glistens in northern Italy, so far north that neighboring Switzerland can easily be seen from one of many peaks in the area.  As Lake Como has been a luxurious retreat since Roman times, the place isn’t a secret.  Fortunately tourists who visit the area don’t swarm it like they do in other areas of Italy, keeping Lake Como a true gem.  I read that the tourists there were “the good kind of tourists,” and indeed they were.

Driving to Lake Como, either to the main towns of Bellagio, Menaggio, or Varenna, was a nightmare even during the low season on a weekday due to sharing the narrow, windy roads with other cars, bicycles, trucks, and buses.  After research it looked as if we would be more likely to find free motorhome parking in Menaggio, and we were right! About 1-1.5 km north of Menaggio, there were a number of free parking spots.  After patiently waiting and moving three times, we earned the winning spot:

Killer views from our window that people would pay a premium for:

After lunch and enjoying the views from the window of our motorhome, we set out for a walk around Menaggio and ended up strolling through the neighborhood of Loveno.  We even found a cherry tree!  The rest of the afternoon and evening was spent gazing out at the lake and quaint towns from numerous viewpoints along the lakeshore. No joke–relaxing and admiring the lake was the #1 activity in the area. 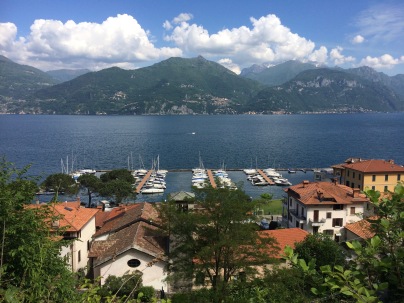 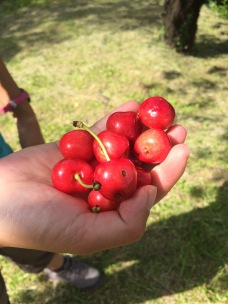 Of the three major towns we visited, I thought Menaggio had the prettiest lakeshore views: 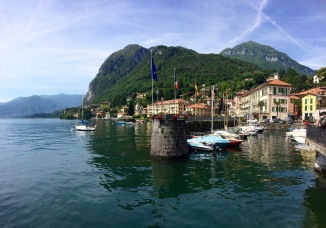 Lake Como’s other major towns included Bellagio and Varenna.  In order to have the freedom of town-hopping via ferry, we both got ferry day passes for €15 each.  Private boats could be rented as well, but the ferry better suited our budget.

Bellagio was the busiest and most “touristy” of all three towns, perhaps due to the number of streets lined with shops and restaurants.  However, I felt that Bellagio lacked the natural beauty that Menaggio and Varenna had to offer.  With the lake surrounding the town on both sides, walks were quite limited.  It was purely more crowded due to the shops.  Although we spent the least amount of time there, Bellagio is still a must-visit. 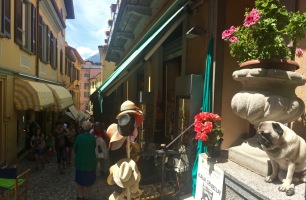 Varenna, the most medieval town of the three, seemed to be a favorite of many.  Not only were the buildings and streets more historic, there were more trails to hike.  From town we walked to the Sorgente di Fiumelatte that flowed into Lake Como.  From the waterfall we hiked to the castle above Varenna, but we didn’t enter the castle due to the €4 entrance fee.  At least the hike to the castle was short and pretty. 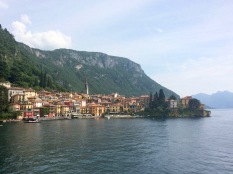 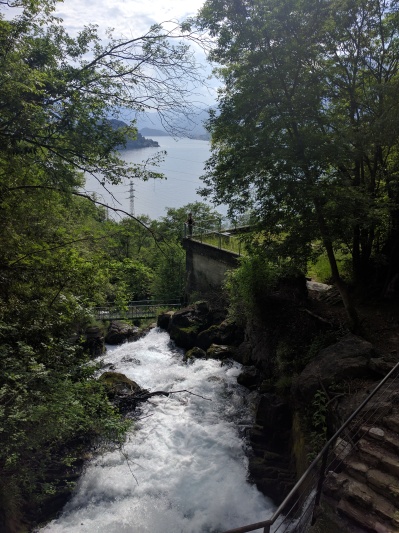 Although preparing and enjoying my own meals from our motorhome was a wonderful way to enjoy Lake Como’s views, we knew dining at a lakeside restaurant was a must.  In addition to the traditional Italian fare of pizzas and pastas, restaurants also offered fish from the lake.  Deelish!

With all the peaks surrounding Lake Como, I knew I had to summit one of them during our stay with prime weather.  Fortunately a popular and equally spectacular hike was conveniently located not far from Menaggio–the summit to Monte Grona.  We drove the steep, windy road up to the town of Breglia (also reachable via bus line C13), parked in a free parking lot, and traversed the steep trail all the way to the summit.  There was also another parking lot further up the road in Monti di Breglia, but we weren’t sure whether or not our old motorhome would have made it.

The first stopping point was Rifugio Menaggio, which took us 1 hour and 15 minutes from Breglia.  Breathtaking views of a misty Lake Como:

Not far from the rifugio was the viewpoint Pizzo Coppa.  Personally, I thought the views here far surpassed the views from the summit.  Looking south, we were able to gaze down at Lake Como, Italy to the east and Lugano, Switzerland to the west.  Chris’ feet point toward Italy below: 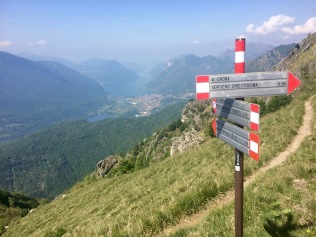 The final section to the summit was steeper and narrower than the trail to Rifugio Mennagio and required mild scrambling.  We didn’t think it was too harrowing, but people who have problems with heights may have to think twice.  It took us about an hour to climb from the rifugio to Pizzo Coppa and the summit. 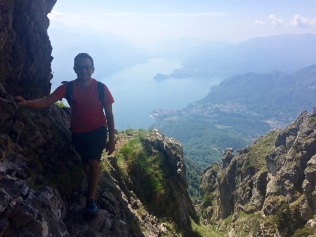 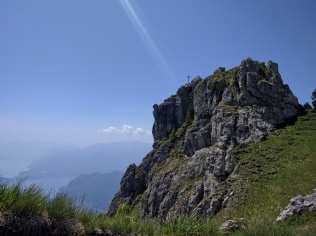 On the way back down, we took the “normal” route back (not the Pizzo Coppa route) and saw more amazing views: 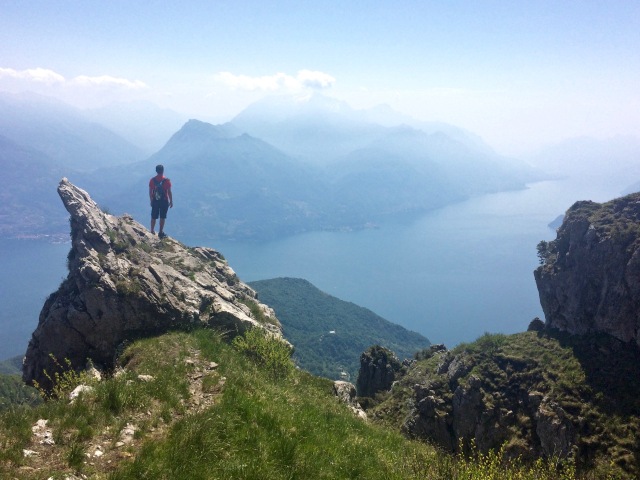 Our return to Breglia concluded our time in Lake Como.  Like in Abruzzo, we were sad to leave such a beautiful, quaint, and not-overcrowded region of Italy.

Lake Como offers something for everyone: lakeside restaurants, bars, and cafes for the city dwellers, boats and kayaks for the water lovers, gorgeous landscape and architecture for the photographers, and countless hikes for the outdoor enthusiasts.  It is no surprise that everyone who has been to Lake Como sighs dreamily with the mention of its name.  We are all in love with Lake Como.

This entry was posted in Italy and tagged bellagio, menaggio, monte grona, varenna. Bookmark the permalink.