As I strolled along the Danube promenade and gazed in all directions at the monumental cityscape and architectural wonders, I found it hard to believe that I was still in eastern Europe.  And what a wonderful reminder that was, because that meant everything was half the cost of its equally thriving neighbor, Vienna, Austria.  Yay!

Coming from the Balkans, it was refreshing to find free and available parking within the city center for motorhomes again.  Literally next to Budapest’s iconic Heroes’ Square is the massive free city park parking lot.  No signs prohibiting camping were displayed, and there were several motorhomes parked throughout our stay. We arrived on a Sunday afternoon which meant a practically empty parking lot, but weekdays during business hours meant a full parking lot.  Time your arrival accordingly, because free parking in the city center with a conveniently located metro station and water spigots and porta potties in the park can’t be beat!

The city park isn’t just a green park for runners and bikers.  Behind Heroes’ Square is the Vajdahunyad Castle, a fantasy castle built in 1896 to celebrate Hungarian architectural evolution.  Today it is a museum.

A quick ride on the metro (super cheap at 350 forint or $1.25 for a one-way ride) took us to the stunningly massive parliament building.  Tours can be taken inside, but simply circumnavigating the structure was pleasurable enough for us. 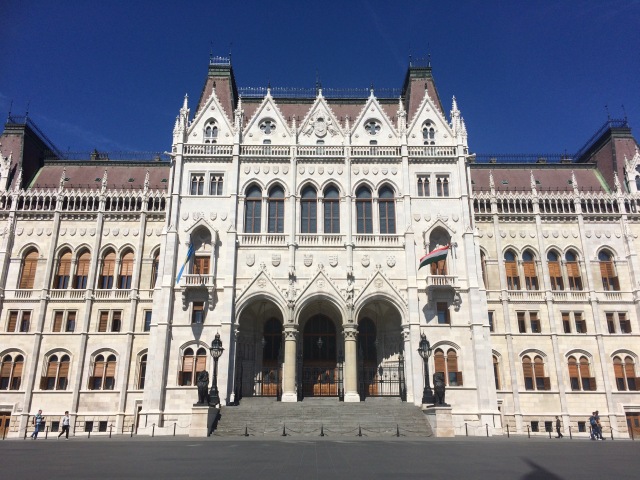 Directly across from the parliament is the gorgeous Ethnographic Museum:

With a morning with wonderful weather, we ended up walking along the Danube promenade for almost 3 kilometers from the parliament to Central Market Hall, where fresh produce, meat, souvenirs, and food can be purchased.  Central Market Hall’s facade and interior showed that the building was clearly once a train station. 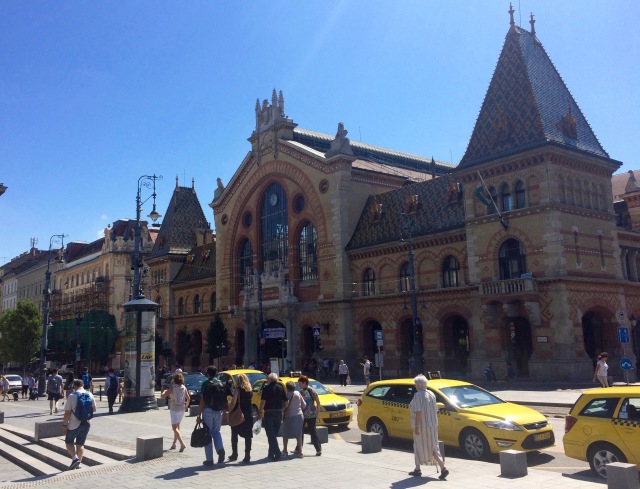 Sellers displayed their Hungarian pride and joy of paprika all along their storefronts.

I came to the market in search for one snack: langos. To my surprise, there was only one food stall in the whole market that sold langos, which meant painfully long lines and crowds.  Langos is a type of fried bread, traditionally topped with sour cream and cheese.  Forget paying more for all the extra crap like vegetables and salami.  We regretfully added a “Vienna sausage,” which turned out to be a sad, cold hot dog.  At least it was only 900 fut ($3.15).  Stick with the traditional.  Its yumminess left me craving for more.

Across the street from the market is the gorgeous jade-colored Liberty Bridge.  Because the metro line wasn’t running, all the pedestrians enjoyed crossing the Danube freely on the road, snapping endless photos of the bridge and surrounding views.

Immediately upon crossing the bridge I was rewarded with another picturesque site: the facade of Budapest’s famous Hotel Gellert. 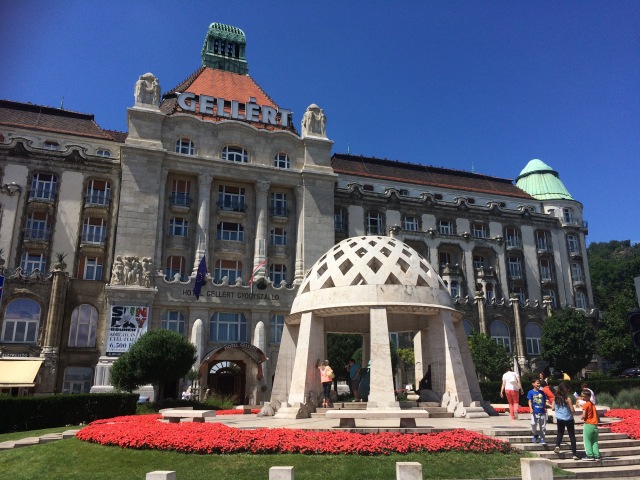 From there, we followed almost all the pedestrians up Gellert Hill to observe the views from Budapest’s tallest hill. 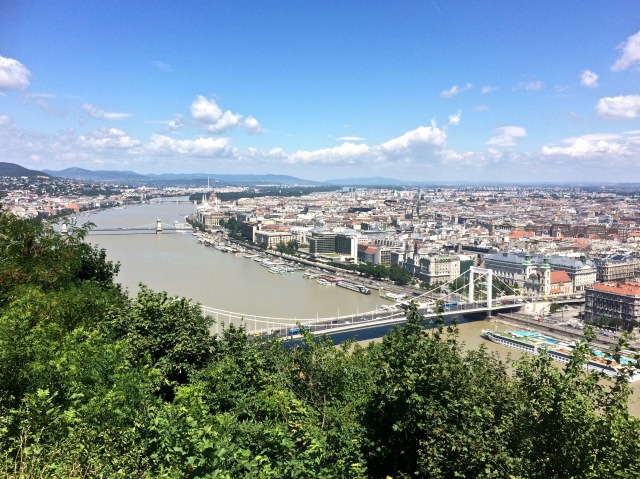 From Gellert Hill, it isn’t a far walk to one of Budapest’s most iconic landmarks: Castle Hill.  We walked through the palace complex and found that it looked better from afar. 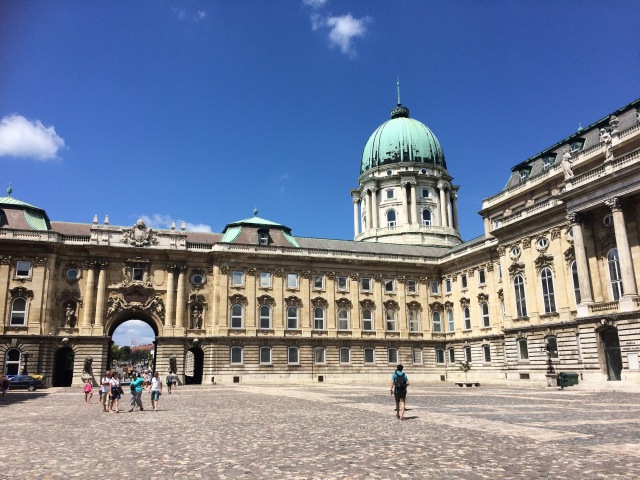 And finally, the third hill, which was the most crowded and rightfully so.  We got up close to see the colorful, mosaic roof tiles of Matthias Church, a truly unique church at that. 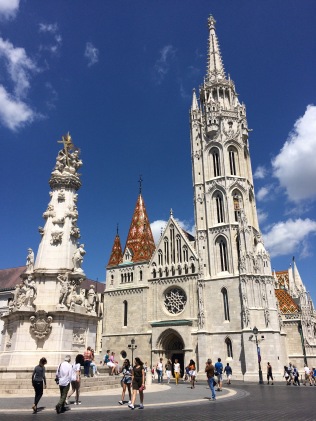 Directly behind the church is the Fisherman’s Bastion, a famous viewpoint overlooking the Danube and the parliament.

Not keen on paying the fee to enter the Fisherman’s Bastion, we walked past it a bit for a free viewpoint.  Score.

After a long afternoon of walking along the Danube promenade and up the three hills on the Buda side, we finally ventured back down to cross over the Chain Bridge into Pest.  This bridge was the first bridge built to connect Buda with Pest. 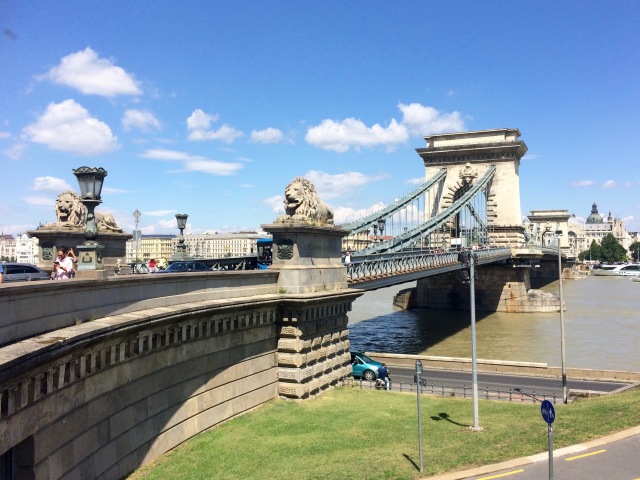 We finished our self-guided walking tour of Budapest with the ultimate comfort meal of goulash in a thick bread bowl–authentic Hungarian!

And, at the request of a Hungarian friend, I tried turo rudi, a staple for Hungarian children. Naturally, I’d try anything with the word “potty” in it.  It wasn’t delicious.  It was interesting, but “very Hungarian” as my friend put it. 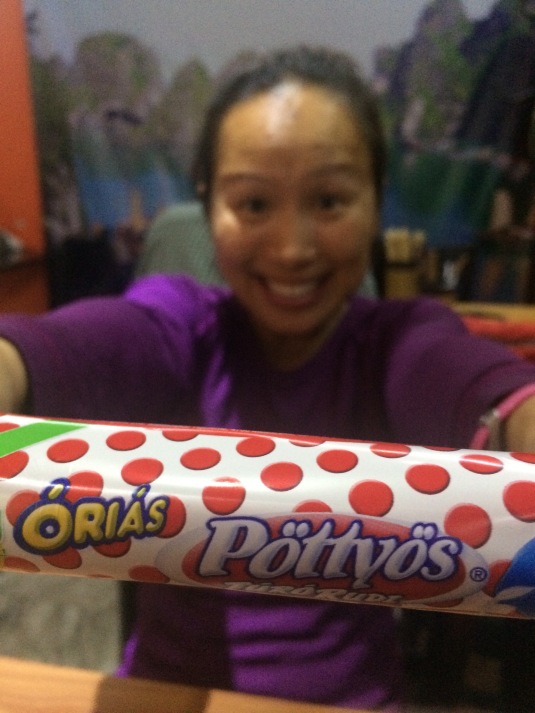 After driving across eastern Hungary from Romania to Budapest, it was clear that no other city in Hungary is anything like Budapest.  The Great Plains, long and flat with the occasional suburban city, were nothing spectacular, but at least had rest stops with drinking water we could stock up on.  Budapest practically smacked us with its rich history and liveliness when we arrived.  ‘Twas a wonderful city for the budget traveler.

This entry was posted in Hungary. Bookmark the permalink.