Compared to its neighboring capital cities of Vienna, Austria and Budapest, Hungary, Slovakia’s capital city of Bratislava lacks the metropolitan feel but brims with pleasant charm.  Hey, at least Bratislava does not fit the description from the movie Eurotrip—those post-communist Soviet era concrete buildings can’t be found in Bratislava at all.  Or maybe I just don’t know anything, because after all, I did come in the summer. In the winter, it could probably get very depressing. 😉

There is no reason why visitors to Vienna, Budapest, or even Prague can’t visit Bratislava. With easy transportation options from Vienna or Budapest, Slovakia makes a wonderful day trip to escape the hustle and bustle of the larger cities.  We spent a night in Bratislava and we were glad we did.

To make our visit in Bratislava a convenient one, we parked our motorhome in a giant dirt lot on the Danube River, directly beneath the Apollo Bridge.  Not only was it free, it offered us tranquility, easy access into the city center, and a wonderful view of the surrounding bridges and Bratislava Castle. Our self-guided walking tour of Bratislava began with crossing the Apollo Bridge.

View of the UFO Bridge and the Bratislava Castle from the Apollo Bridge:

Upon crossing the Apollo Bridge, we immediately headed for the nearby Blue Church. Unlike any other church in Europe, this church is built in the Hungarian Art Nouveau style and is painted completely pastel blue. Visits to churches typically bore me, but this one was actually worth seeing.  If a church could be built from Peeps marshmallows, this would be it.

From there we walked to the busy Hviezdoslav Square in the old town, where the pretty National Theater flanked its western end.

Strolling through Bratislava’s Old Town was charming as it was summertime, with all the outdoor restaurants and cafes bursting with energy.  Perhaps the most recognizable and photographed monument of the Old Town is St. Michael’s Gate which connects the Old Town with the new, modern city.  Most buildings on this street survive from the 18th century, and the gate is the only preserved gate in all of the Old Town. 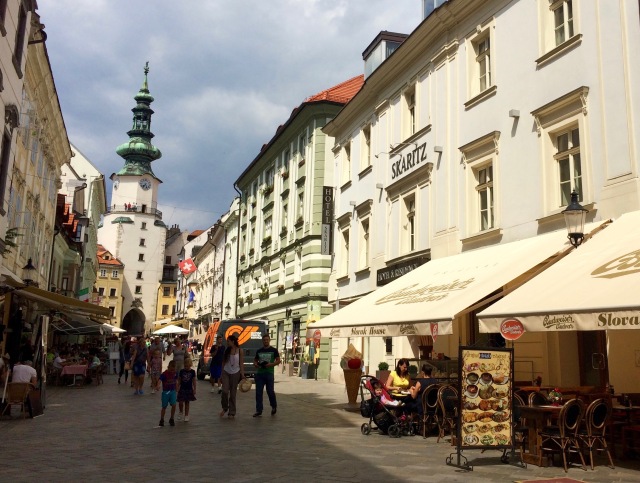 Outside the Old Town, about a 20-minute walk up a hill, is the Slavin War Memorial.  This eye-catching monument can be seen from all over the city, and sprawling views of the city can be seen from the monument.  Like in France’s Normandy, Bratislava’s memorial was built to commemorate the fallen victims of an army in the attempt for liberation during WWII.  The soldiers who fought belonged to the Soviet’s Red Army. In addition to the memorial, thousands of soldiers are buried there, which makes the site a memorial and a cemetery.

The Russian cross overlooking the city: 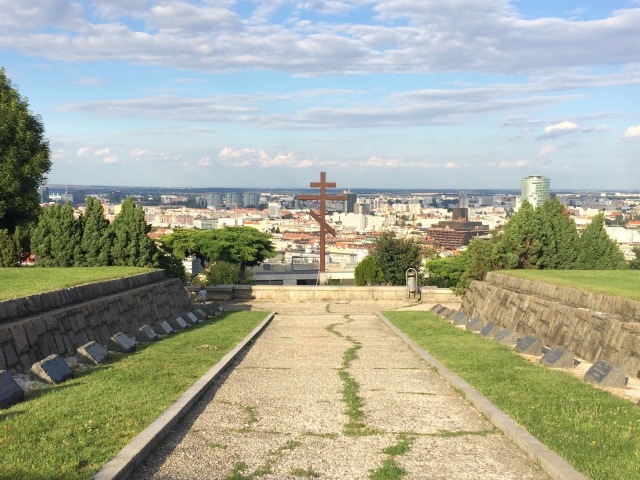 By early evening we returned to the Old Town, this time directly to the castle. Fortunately the castle hill isn’t as steep or tall as it appears to be, and a walk around the castle is free!

Looking down at the Danube River and UFO Bridge from the castle:

We returned to the Old Town for dinner, and after our stomachs were filled, we headed back to our motorhome on the other side of the river. By that time, the sun had set, and Bratislava illuminated in the darkness as if it was a different world. Iconic structures such as the castle, the St. Martin’s Cathedral, and the UFO Bridge glowed with glory, and I appreciated this different perspective of the city. 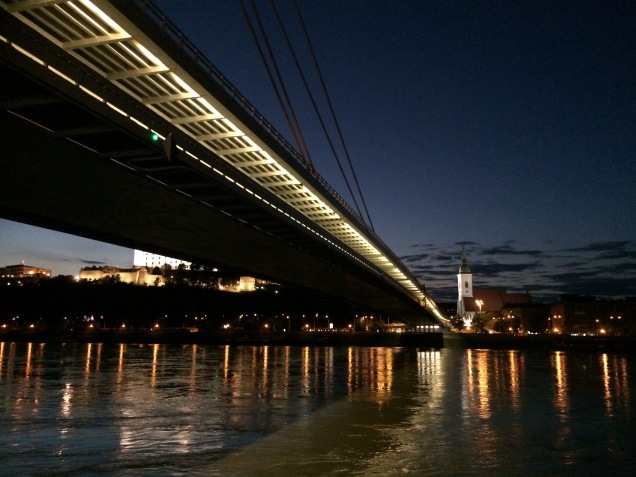 The illuminated castle and the Danube:

The UFO Bridge up close: 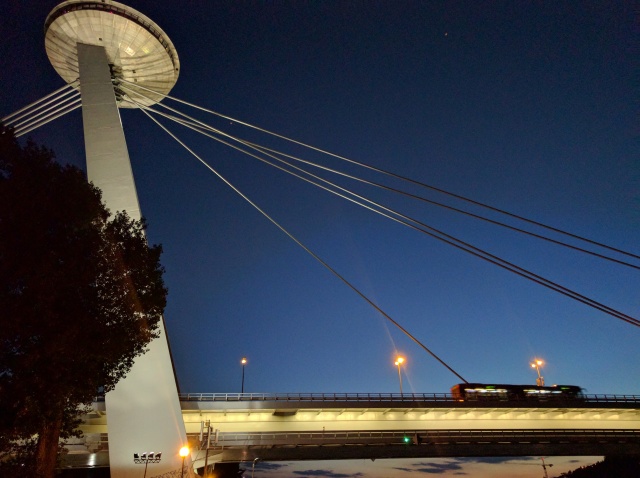 As we walked along the Danube River toward Apollo Bridge in the dark, we enjoyed experiencing Bratislava like a local. Joggers, walkers, and bikers zipped by, teenagers held hands and cuddled in the park, families and children played in the playground, adults relaxed along the beachfront cafes and restaurants, all while the city glistened in the distance. That side of the Danube even offered a beachfront, with lounge chairs, hammocks, music, and food vendors. Closer to Apollo Bridge was a summer movie night, with a giant screen, projector, and families enjoying a movie under the stars and warm summer evening. “This is a special place,” I thought to myself as I gazed at the bright castle and sparkling river before falling asleep.

The next morning we took our motorhome to an auto service shop conveniently located down the street from the parking lot.  It was time to get her routine oil and filters changed, and our goal was to complete the maintenance work before returning to Western Europe.  When we asked for the price, the mechanic responded, “Do you need a receipt? It will be cheaper without a receipt.” Oh, how I will miss you, Eastern Europe.  What cost us €320 in Germany cost us €128 in Slovakia.

While we waited the 5 hours for our motorhome to be ready, we spent a productive morning at the nearby Aupark Shopping Center.  At this point we’ve learned that shopping malls always provide free air conditioning and free wifi, but Aupark also went as far as providing lounge chairs and outlets throughout the mall.  Air conditioning, wifi, lounges, electricity, clean bathrooms, and inexpensive cafes? This mall was a winner.

Thanks, Bratislava. You were a splendid way to end our Eastern European portion of the trip.

This entry was posted in Slovakia. Bookmark the permalink.