Vancouver Island comes second after New Zealand for being the largest island in the Pacific, and oddly enough, at the very southern tip of the island is Victoria, the lovely city and capital of British Columbia. Everyone raves about Victoria, often finishing their suggested excursions with a sigh of wistful nostalgia. People either love or hate San Francisco, Chicago, and New York, but no one, and I mean no one feels any disdain for Vancouver or Victoria. We had to check it out.

Trip planning for Vancouver Island was not easy. First, there was the expensive ferry. (If we didn’t have to tow a trailer then the ferry would have been less of an issue.) Second, it was the off-season, which meant limited activities. And third, if we were going to ferry over the trailer, then we had to see more than just Victoria. And what exactly was on Vancouver Island other than Victoria? We scrambled for more information literally a day before our ferry ride. All the marketing (photos, descriptions, and excursions) was catered to older and often retired Caucasians, and now that I’ve returned from Vancouver Island I can definitely see why. Pleasant. Peaceful. These are the words that conjure in my mind now when I think of Vancouver Island. Though expensive and far from epic, we had no regrets visiting the quaint towns and capital of British Columbia.

Coming from Squamish, we took the ferry from Horseshoe Bay to Nanaimo, Vancouver Island’s second largest city after Victoria. The price for a one-way 1.5-hour ferry ride for two adult passengers, a car, plus an oversized vehicle (32 feet) was a whopping CAD $164. Considering we spent 5 nights on Vancouver Island, it was worth the cost. 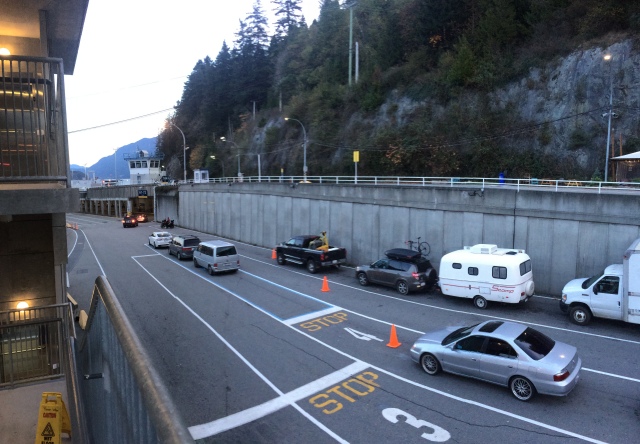 Scromp gets his first ferry ride! 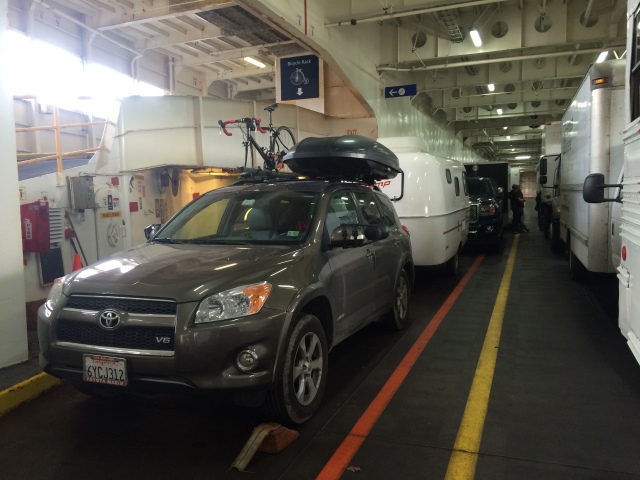 How Canadian…taking the ferry across the sea. 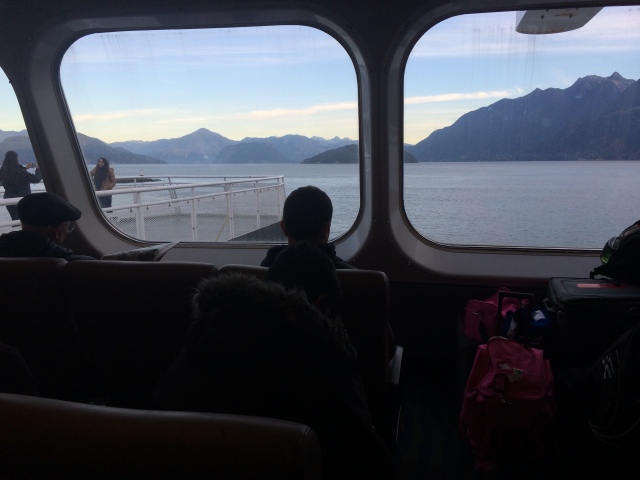 After docking and exiting the ferry at Nanaimo, we excitedly headed toward the remote west coast for Tofino and Ucluelet. Along the way we made the touristy stop at the Coombs Market. Anyone with an interest for the culinary arts can spend hours browsing each section at the market, but what attracted us to this local gem was its kitschy, roadside tourist attraction—the goats on the roof! 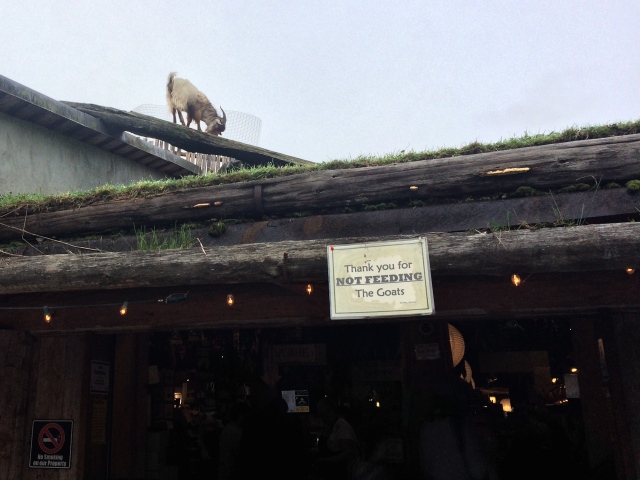 Their adorable pooping goats logo was printed on stickers and shopping bags. I later saw many cars sporting this sticker all over Vancouver Island. 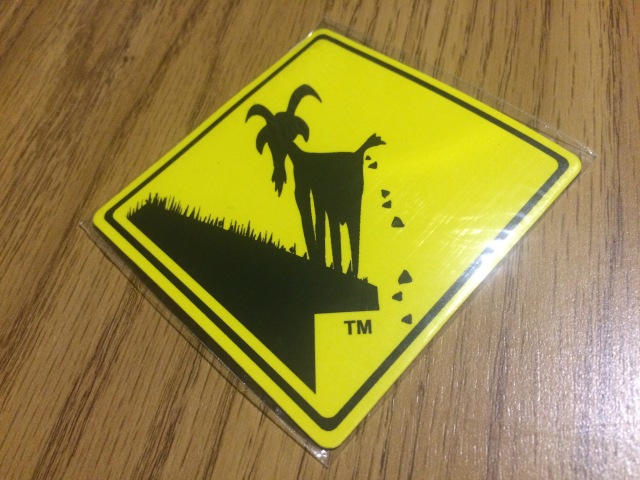 In order to get to the remote beach towns of Tofino and Ucluelet, one must drive a couple hours through zig-zag forest roads. At the end of the long drive is a skinny peninsula, the land mostly belonging to the Pacific Rim National Park Reserve. In the northern tip of the peninsula lies the surf-bum town of Tofino, and in the southern tip lies Ucluelet. Both towns are so far from the next nearest town that simply leaving would require a road trip. The only attractions remaining for the season was an expensive boat ride to some natural hot springs, whale watching, and surfing, none that sounded appealing to us.

Luckily the woman at the visitor center told us of a dispersed campground (or in Canadian words, Crown Land) in the area—the Clayoquot Arm Beach Recreation Site at the north end of Kennedy Lake. The unpaved road was only about 7-8 miles long, but because it was filled with nasty potholes it took almost an hour to get to the site. 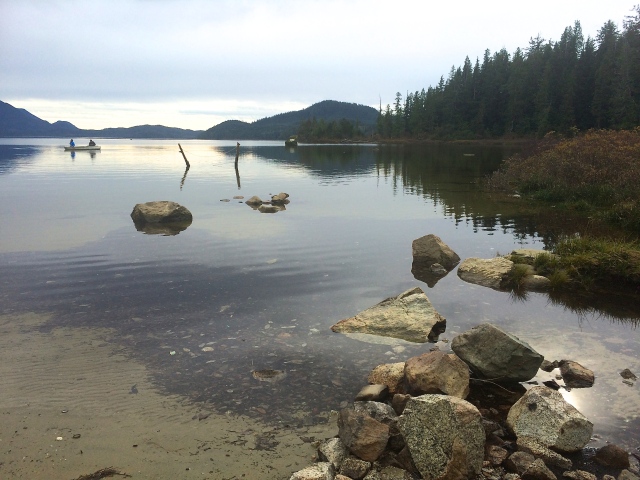 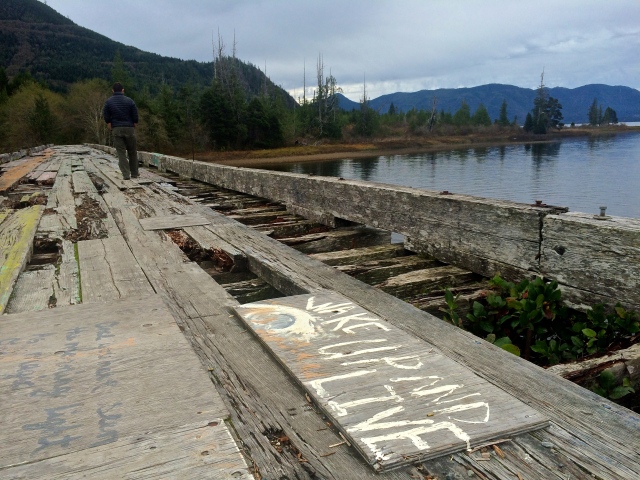 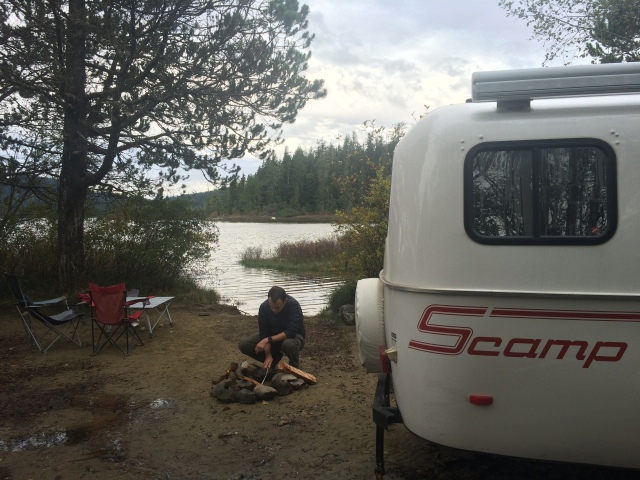 And we had pleasant views from our trailer. 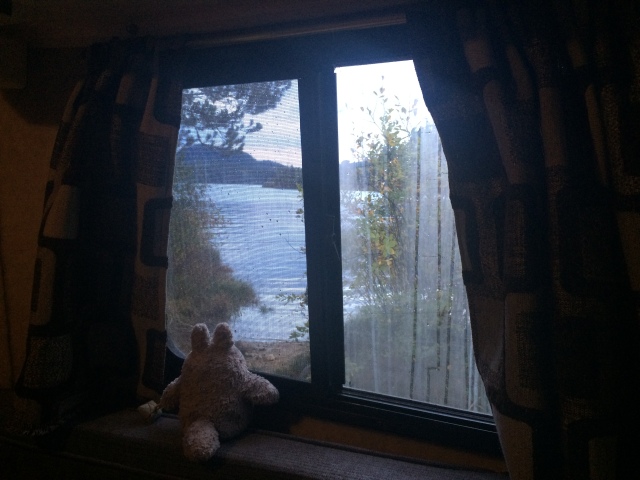 In the town of Tofino there was a Native American art gallery. 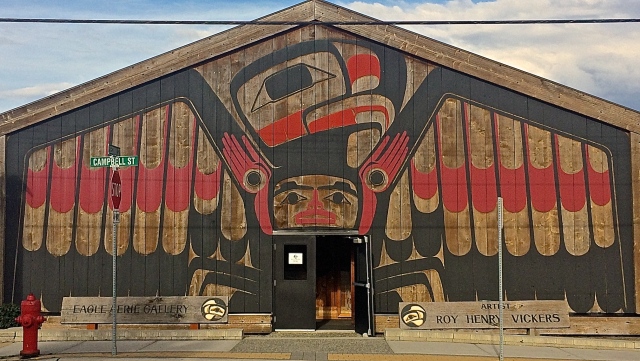 And we found Chesterman Beach to be beautiful at low tide. 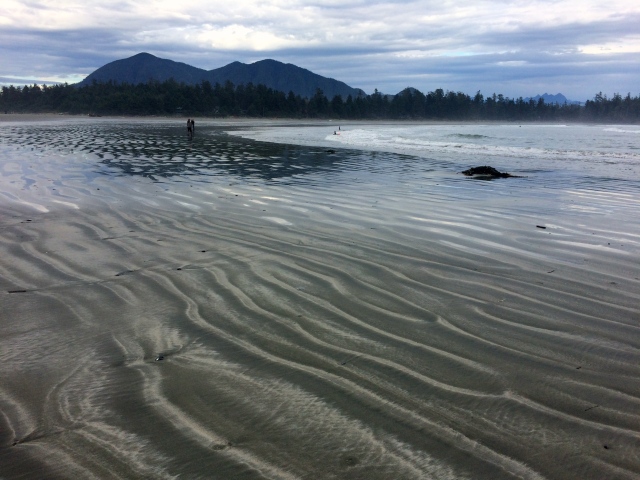 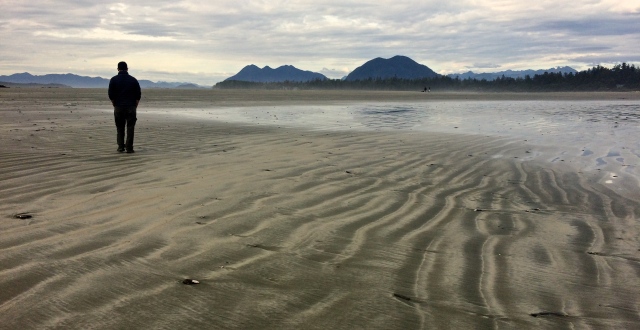 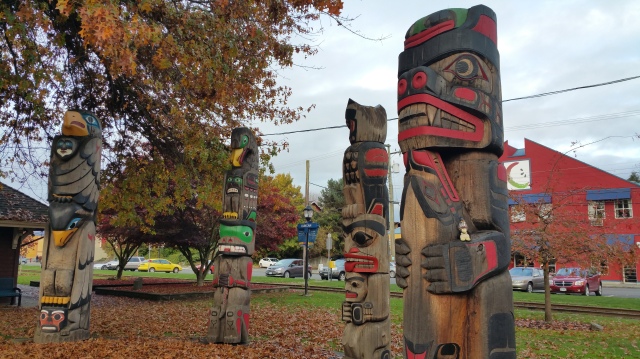 The widest totem pole ended up being more interesting than we anticipated—it was carved from a 750-year-old tree! 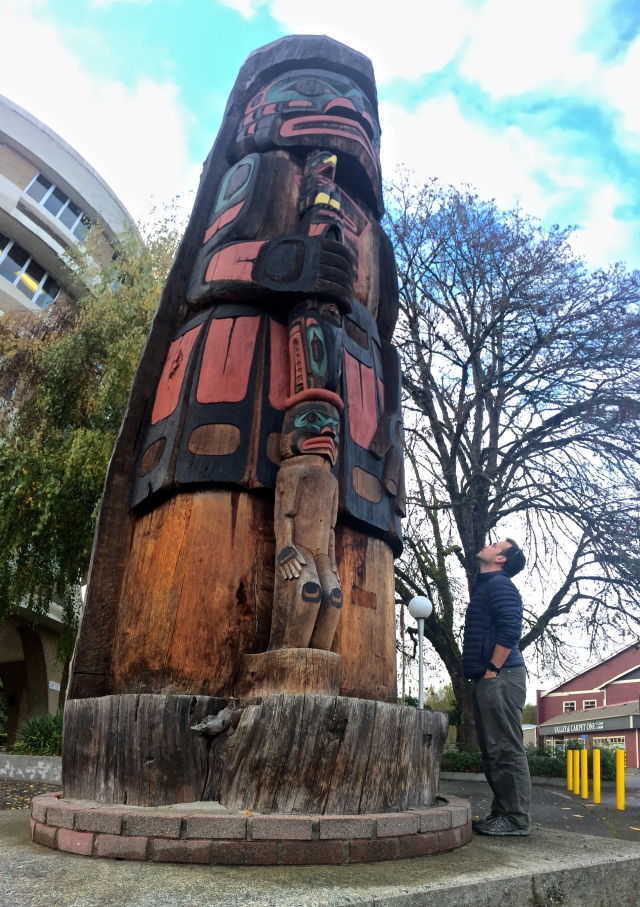 Just outside of Victoria is the town of Langford which is home to hundreds of spawning salmon in the fall. While most attractions in the Pacific Northwest were closed for the season, Goldstream Provincial Park’s main attraction was only just getting started. In fact, October is the best month to visit Goldstream as October marks the beginning of salmon spawning. Before heading into Victoria we visited this park where we observed hundreds of salmon swimming upstream! We had never witnessed this incredible phenomenon; to watch them fight their way up the current to spawn and die was awe-inspiring. I know it may sound boring in writing but seriously, in person, it was nothing short of amazing. 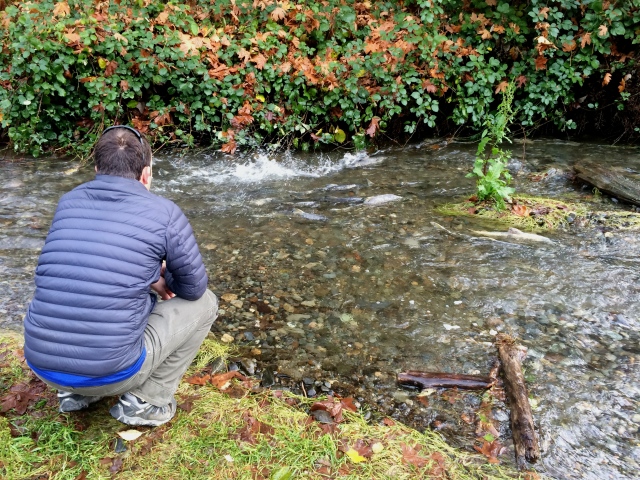 In addition to observing the salmon, we saw a bald eagle and picture-worthy trees. 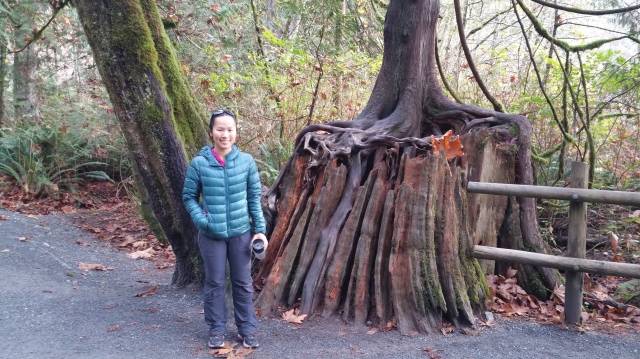 And finally, lovely Victoria. We briefly passed by Chinatown (apparently Canada’s oldest Chinatown), ate halibut fish’n’chips at the Inner Harbor, watched seaplanes take off and land at the seaplane terminal, and strolled by the parliament building. 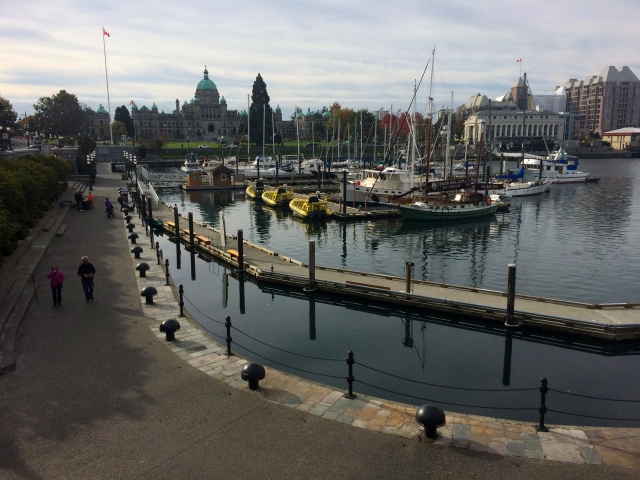 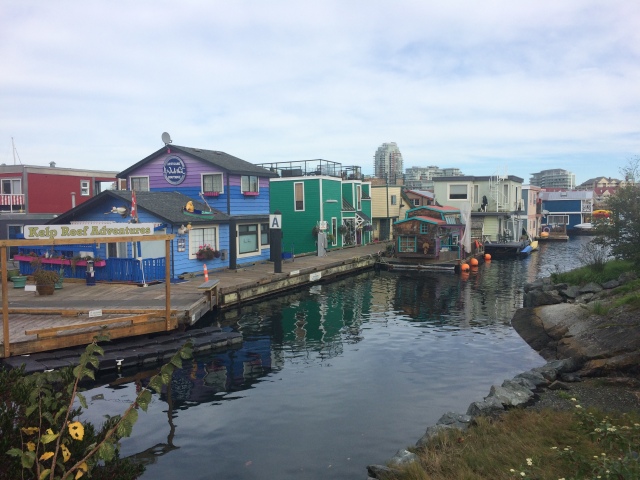 Along the southern edge of Vancouver Island at Beacon Hill Park, with Washington in the far, far distance (not visible in this photo): 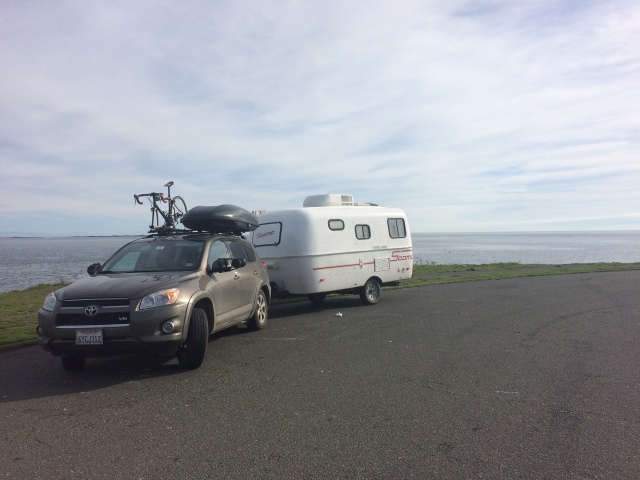 Our final town of interest on Vancouver Island was Port Renfrew. From Victoria we headed west again for more Pacific beauty. Most of the drive was windy and up and down along the coast, with woods to one side and the ocean and Washington state to the other side. Port Renfrew, primarily a Native American reservation, was the most desolate, lonely town we had ever seen. Combine run-down trucks, RV’s, un-kept houses with piles of junk and toys in the lawn with a lack of any human being or animal and perpetually gray skies, and you’ve got yourself quite an eyesore of a town.

The real reason to drive all the way to Port Renfrew is Botanical Beach. At low tide you will truly understand where the beach gets its name. Powerful waves hurl boulders against the rocky shore, creating cavities that are further deepened over time by sea anemones eating away at the rocks. Gradually, the cavities become large holes and are filled with colorful stones, sea grass, hermit crabs, mussels, starfish, and other sea life—an individual underwater botanical garden. Each tide pool resembles a mini aquarium that you can gaze down into. I’ve seen tidal pools but none like those at Botanical Beach. 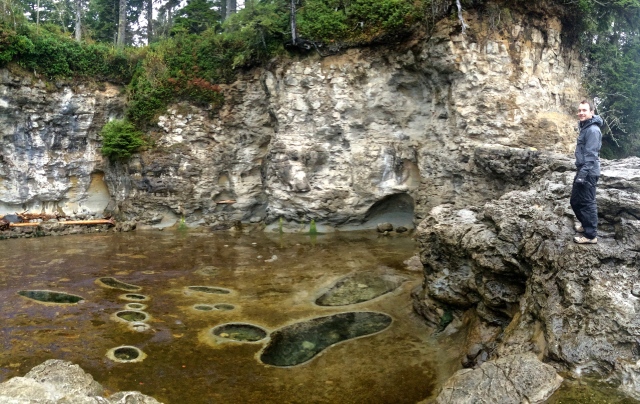 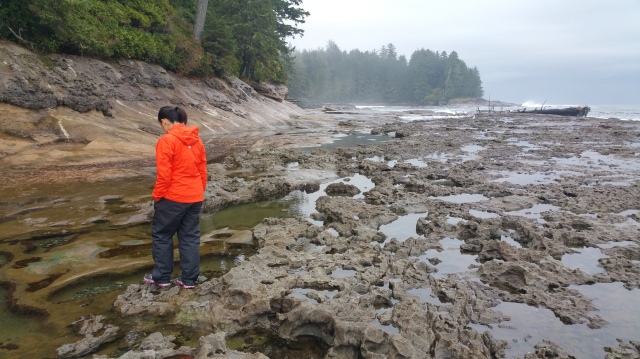 Standing over and looking down into a collection of tide pools: 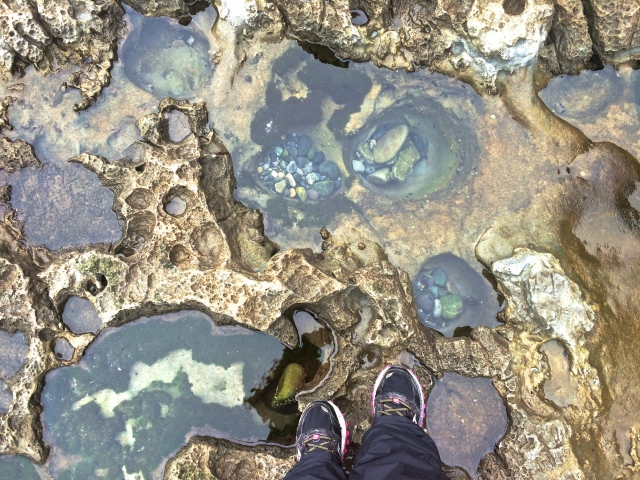 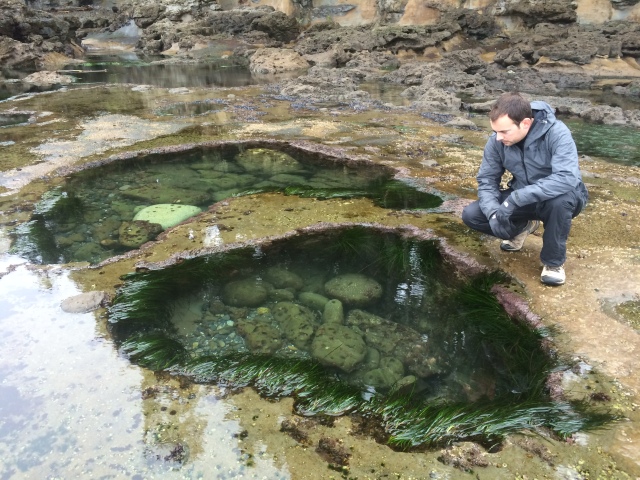 We wanted to check out Avatar Grove next, another forest filled with massive trees, but because the town’s only gas station was closed for the season we had to head back to Victoria in a mad-dash for gas. Joy.

Returning to the U.S.

It was another early start and another ferry ride back to mainland British Columbia, this time from Swartz Bay to Tsawwassen. Now we were headed for home, the U.S., after spending almost 2 weeks in British Columbia. The drive to the U.S. was short, the line across the border even shorter, and we made a detour to Lynden, a Dutch town not far from the border in Washington state.

Downtown Lynden with a Dutch windmill. 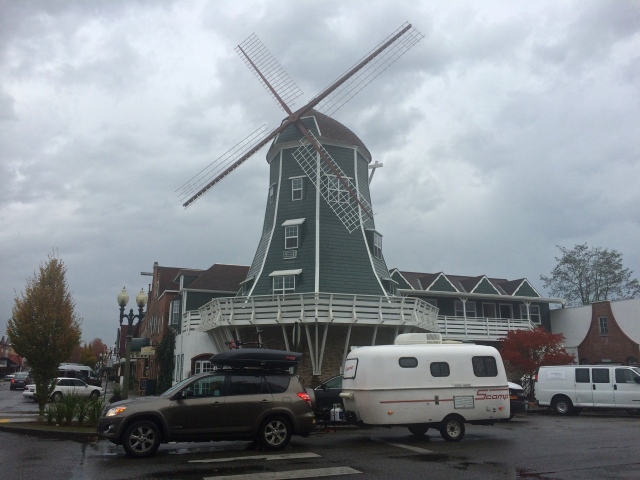 Why did we go to Lynden? For the famous Lynden Dutch Bakery. I read that their pies were to die for and I had to find out. The verdict? Seriously the best damn apple pie I have ever had. If I ever cross the border again by land, which I know I will since I’m Canadian, I promise I will always stop by this bakery for pie. 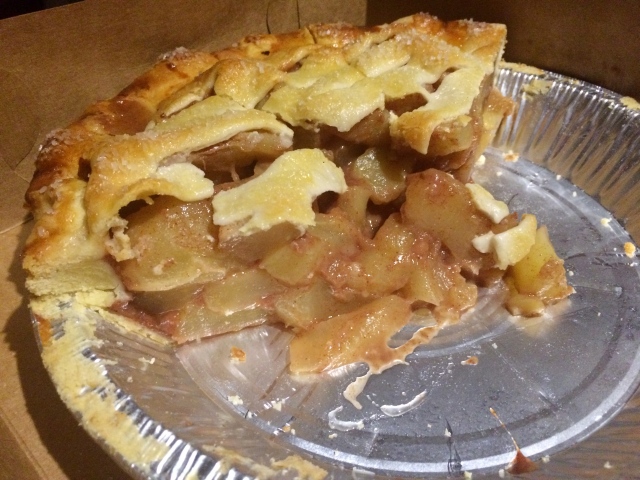 From each small town we visited, from Coombs to Duncan to Lynden in the U.S., we saw or learned something memorable. We definitely weren’t the target demographic for tourism in Vancouver Island, but we still enjoyed the pleasant beauty of the island and Victoria. I tend to strive for epic factors in my destinations, whether it be scenery or activity, but sometimes road trips are about visiting the adorable, lesser-known towns between them. If it weren’t for that, then I would never have seen goats on a roof, the world’s widest totem pole, a stream of spawning salmon, or botanical gardens of the sea. And now I know where to find the best damn pie.