That’s right. Keep staring. You don’t even know where to start right? Just replace the j’s with y’s: Lyublyana. There. That’s how you pronounce it.

Like the country, the capital is small with a population of less than 300,000 people.  But also like the country, the capital is beautiful and adorable and packs a whole lot in.  Upon my research of this unheard of capital, I quickly learned that Ljubljana is favored by many.  While the capital of Croatia seems to be a hit-or-miss, that isn’t the case for Slovenia.  During our stay we even met a Scottish couple who were playing with the idea of moving there.  Not only is the capital irresistibly charming and incredibly clean, it has parks, tourist sites, and even a hipster scene to offer.  I thought the best part was the lack of tour groups.  Nope.  It was also one of the least expensive countries in the EU.

For pure convenience we stayed at a car cleaning facility that offered motorhome parking.  While the lot was a noisy, crowded car lot on the weekdays (empty on the weekends), it was only a 15-minute walk to the main center.  There was also a shower and toilet included in the €10/night price. Not too shabby. We also befriended our only neighbor, a Scottish couple campervanning indefinitely around Europe. 🙂

Just down the street from the parking lot was the commune of Metelkova, comparable to Copenhagen’s hipster Christiania free town.  Friday and Saturday evenings guarantee a livelier atmosphere; we didn’t see another soul in our Sunday afternoon visit, which allowed us to gape at the trippy art at our own pace.

Once in the city center, we did the following tourist attractions:

We marveled at the dragon bridge (how cool are those dragons?!).

We sauntered along the riverside into the square and crossed the triple bridge. 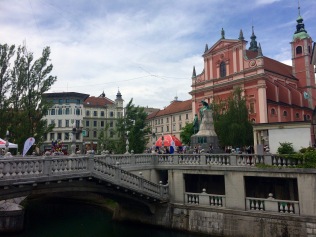 We entered the cathedral through the holy door.

We bought fruit at the local market (which was unfortunately desolate on a Sunday).

We walked up the hill to the castle (where Chris partook in some archery because why not?). 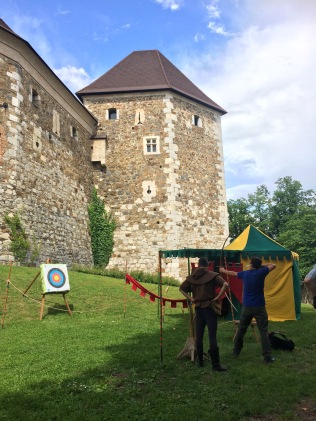 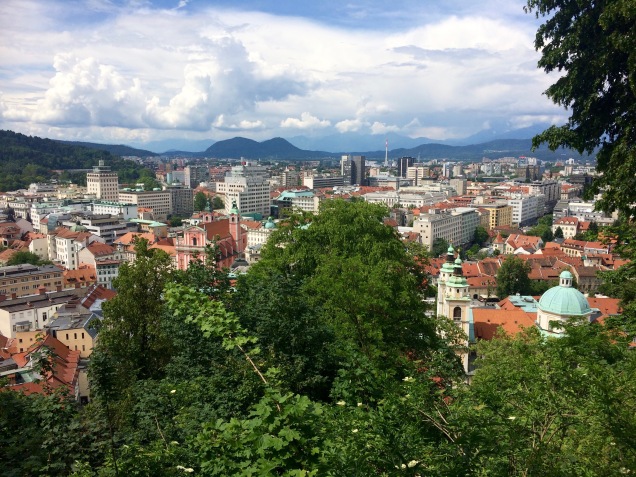 And best of all, we indulged in European cafe culture by eating chocolate cake and ice cream in town along the riverfront at the popular Cacao.  Personally, I’ve had better ice cream elsewhere, but the chocolate cake was memorable!

We didn’t get a chance to check out Tivoli Park because a thunderstorm rolled in.  Who wants to take a walk through a park in the rain?  Not me.

Final funny picture.  Apparently anyone can buy cigarettes or vodka from a vending machine.  No age limit there!

I don’t think it’s possible to tell from just photos and words that Ljubljana is a special place.  It is only several hours away from Venice, Italy, but is on the other end of the spectrum.  Amazing what a world away a capital city could feel when its charm hasn’t been tainted with mass tourism.  People keep saying to go to Ljubljana now before everyone goes, but I don’t everyone will go to Slovenia.  That’s why it’ll always be Europe’s charming little capital.

This entry was posted in Slovenia. Bookmark the permalink.