I read that if you visit the castle in the winter, when the forests and rooftops are dusted with snow, it would be a magical experience.  Because we were already spending February in Germany, I knew we HAD to go.  Winter also meant the low season: empty parking lots, no lines, no pushing and shoving, and no worry about sold-out tours. In the summer tours do sell out, and it is recommended tourists purchase tickets a couple days in advance online.

The castle is roughly a 2-hour train ride from Munich.  Day trips can be done independently by train and bus, or with a tour agency.  But one of the reasons why we purchased a RV was for the freedom of traveling at our own schedule.  We left Munich in the evening, parked at a free Stellplatz half an hour’s drive away from the castle in Pieting, slept, got up,  and arrived to a mostly empty parking lot beneath the castle by 9:30am. 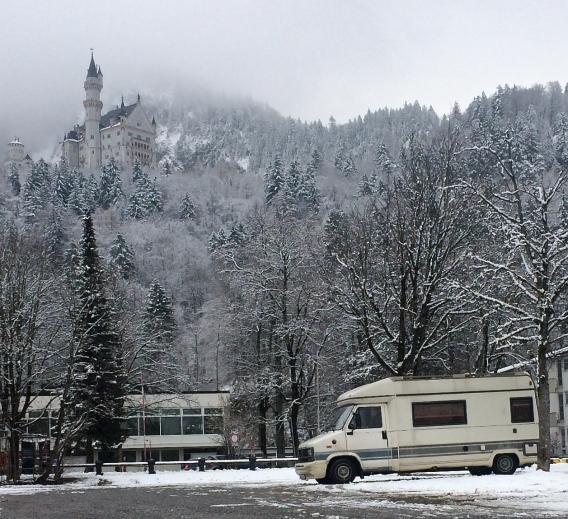 From the ticket office we walked up the hill toward the castle.  The shuttle bus was closed due to snow and ice, but there was a horse-drawn carriage catered to tourists.  We didn’t think the walk was far or steep at all, and the walk was a beautiful winter wonderland:

Not far from the castle: 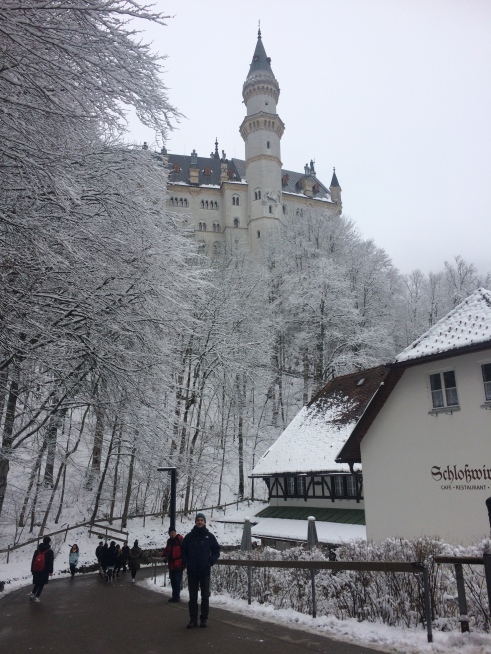 The castle up close: 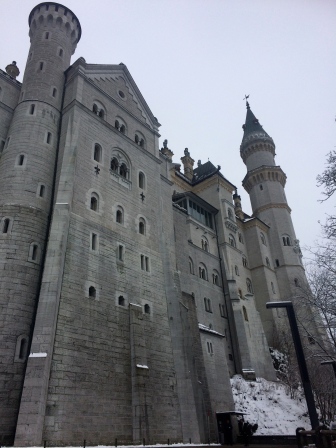 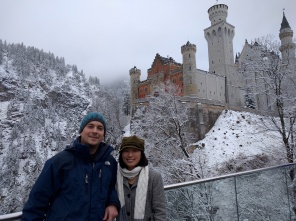 Tours are a mere 30 minutes long, and photography is forbidden inside the castle.  Still, there was plenty to take pictures of, especially from the trails surrounding the castle. To my disappointment the Marienbrücke bridge and the trails around the castle were closed for annual winter maintenance. Admiring the Neuschwanstein from the bridge to get that epic photo was one of my main reasons for visiting!

Fortunately there were several trails leading up to Marienbrücke; the trails closer to the castle were clearly gated with a No Trespassing sign, but the trails from the bottom of the hill weren’t gated off.  Determined to get the epic shot, we hiked up a vacant, alternative trail that led up to Marienbrücke.

When we reached the top of the hill, we stumbled upon another No Trespassing sign.  However, there were already a couple other people equally as determined as we were to see the view. Whether or not they actually saw anything spectacular, it didn’t matter.  They headed down, and we headed up past the sign.  There was even a maintenance worker watching us trespass, but he didn’t care.

After easily circumventing a small barbed wire fence and walking up a short, slippery hill, we discovered exactly what we were searching for at the edge of a cliff.  This: 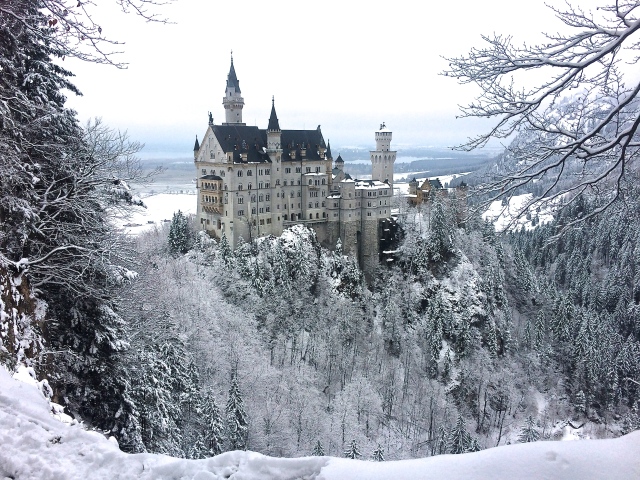 We even saw amazing views of the other castle from the top. 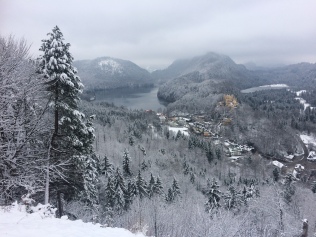 Normally during the high season the trails and Marienbrücke bridge are open.  During the winter, we had to get a little creative to see the breathtaking landscape surrounding the Neuschwanstein.  It was this view that made the whole trip worth it.  Don’t skip Marienbrücke, even if takes a bit of determination. =)