It seems now that many travelers opt to skip Cairo entirely (I don’t blame them; it is rather hectic and disgusting) and head straight to Luxor for all its archeological treasures. While the sites are wonderful and the city is large enough to host an endless array of restaurants and hotels, Luxor has one major problem: its plague of touts.  I read that touts in Luxor are possibly more aggressive than the touts in Cairo and Giza, and with the decimated tour industry, touts are more hungry than ever.

But rather than falling into the easy cycle of frustration and anger, we took advantage of the fact and turned it into a language game. Spanish mostly worked; however, touts who claimed they spoke Spanish, albeit far from conversational, clung on to us anyway out of desperation. We pretended to be deaf at Karnak Temple, which was amusing at first, but quickly got old. I did enjoy the bewildered looks on all the touts’ faces when Chris responded with American sign language. And finally, Vietnamese. That worked like a charm. Egypt receives hoards of Chinese, Japanese, and Korean tourists. But Vietnamese? Nope. Touts had no idea what to do with the Vietnamese language, and they quickly left us alone after I spat out a few Vietnamese sentences. In sum, it’s easy to become exhausted and angry in Luxor, but turning it into a game makes it bearable, even amusing at times.

That said, we were prepared for the herds of touts waiting for us at the exits of all the temples. They attempted to sell horse carriage rides, taxis, water, jewelry, statues, clothes, snacks, you name it. From the famous sites of Luxor Temple and Karnak on the east bank to the Valley of the Kings and Temple of Hatshepsut on the west bank, the touts stood out front salivating for the attempt to rip us off. It was quite the site.

Anyway, now I dive into the notable sites of Luxor.

First, Luxor Temple, which should be seen in the evening for the brilliant display of lights. With its convenient location in the heart of the city, walking there is easy. 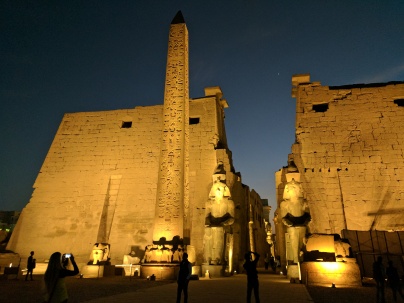 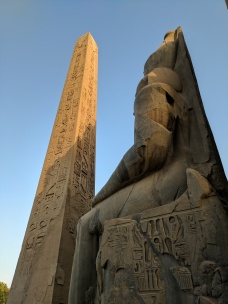 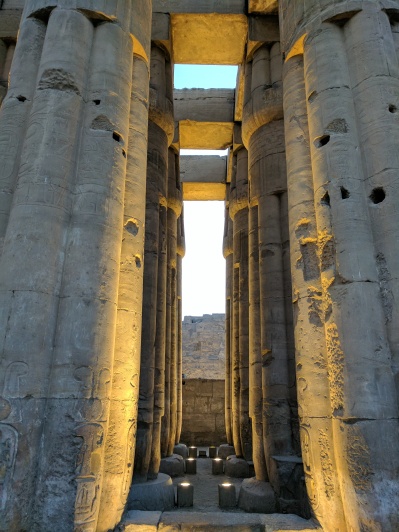 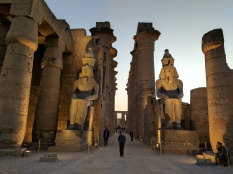 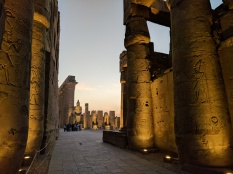 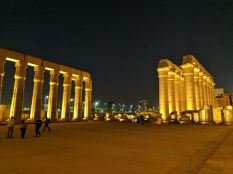 The avenue of the sphinxes, which runs 3 km in length, begins at Luxor Temple. It is still under excavation. 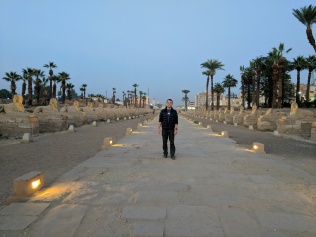 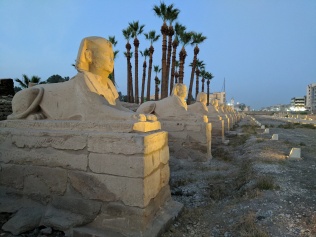 Even more mind blowing is the complex of Karnak to the north of the city. It is about a 20-30 minute walk from the city center; we paid 1 LE (5¢) each to take the white microbus to the site and returned by a pleasant stroll along the Nile.  Karnak is more than a temple; it is a massive complex of obelisks, sanctuaries, and temple complexes. Every stone and structure is grand in scale; multiply that to fill 2 square kilometers and you’ve got plenty to explore amidst the tour groups and touts! 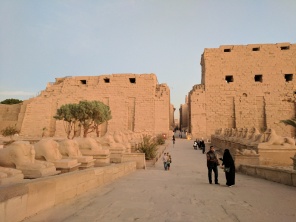 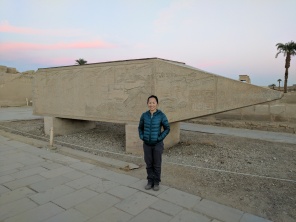 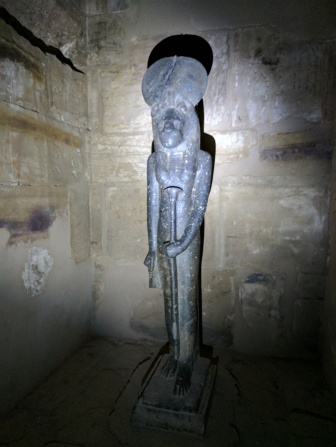 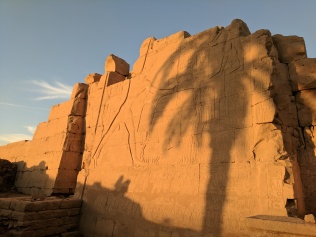 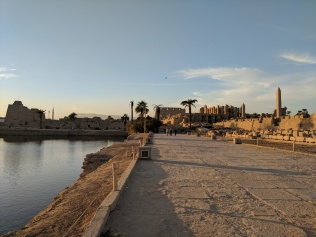 While the heart of the city lies on the east bank, the incredible necropolis lies on the west bank. Because our Nile cruise included a tour to the west bank, we did not have to succumb to giving touts our business.  However, the independent traveler could easily cross the Nile by ferry for 1 LE (5¢), follow the locals to the shared microbuses, and take the microbus to the desired location/ticket office for only a few more pounds. Taxi drivers offered the same journey from 20-50 LE ($1-$2.50).

On our way to the Valley of the Kings, we passed by the Colossi of Memnon. 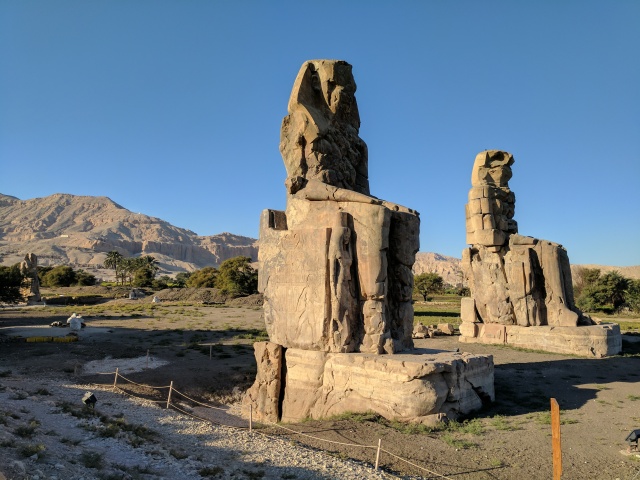 We then made our way into a small valley of hills to the Valley of the Kings, which consists of 63 royal tombs. Ticket entry permits entry into 3 tombs. Unfortunately photos are not allowed, but the “guards” will accept bribes for the photo opportunity. One guard went as far as forcing us to open our photo app in our phones to prove we hadn’t taken any photos. After we showed him we hadn’t taken any, he proceeded to tell us we could take a photo (obviously for a tip). Seriously? In any case, I managed to sneak a photo of a beautifully preserved tomb without paying a stupid tip. 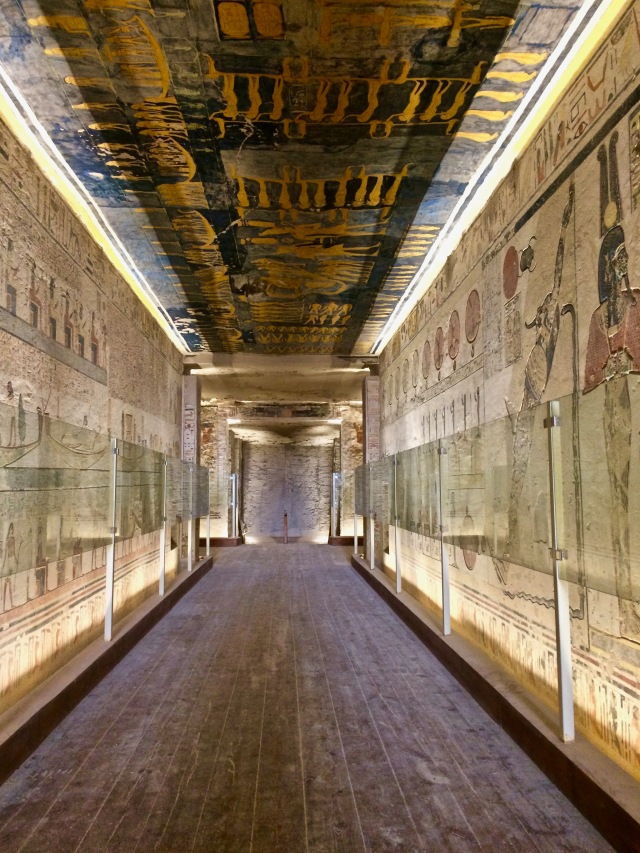 After the Valley of the Kings we then proceeded to the Memorial Temple of Hatshepsut, perhaps the most jaw-dropping site in Luxor. No where else does a temple blend in so naturally with its surrounding environment. Pictures are thankfully allowed here! 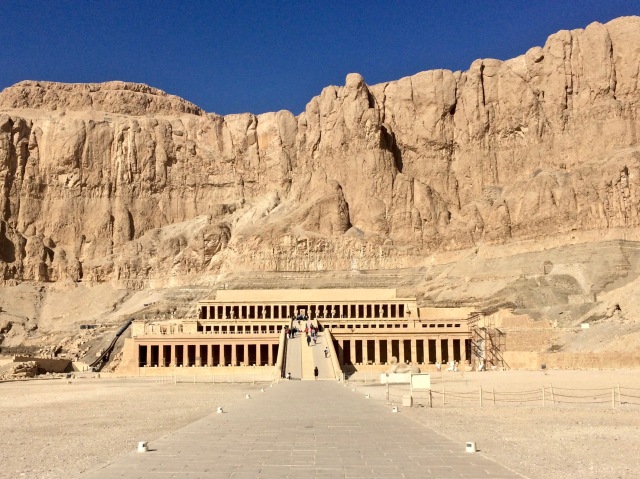 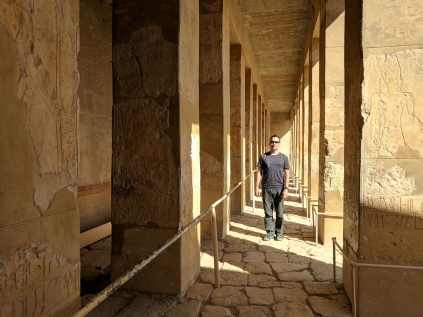 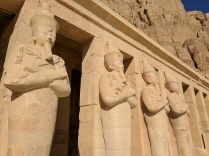 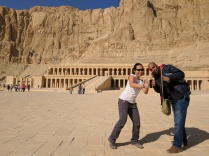 At the end of our temple touring in Aswan, along the Nile, and in Luxor, we exhausted our desire to venture into any more temples. Needless to say, we were “templed out” despite there being even more temples to see within Luxor. With an extra day to spare we decided to independently tour the temple of Dendera in Qena, about 80 km north of Luxor. This time it wasn’t about the destination; it was about the journey. Instead of paying 500-600 LE ($25-$30) for a private taxi, we hopped into a microbus the next morning not quite sure how to get to Dendera and with the plan to rely on the help of locals. Adventure! 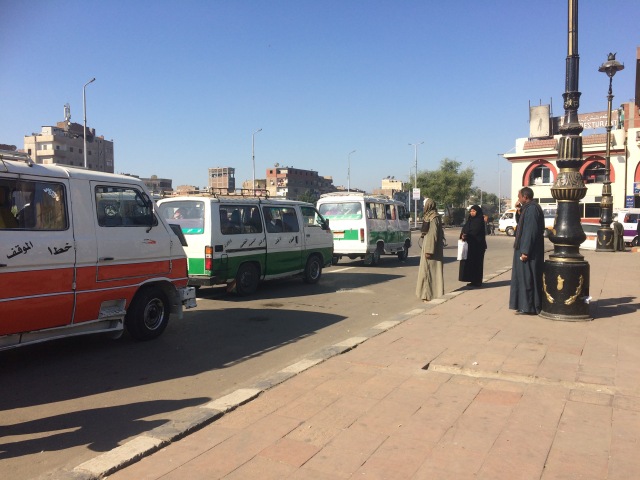 I won’t dive into the details but after 4 different microbuses, a scam, and a shouting match, we eventually made it to Dendera! The first microbus took us from our hotel to the main microbus “station,” where we transferred to another microbus for Qena. This microbus station was about a mile north from the train station along the main road, on the west side of the tracks. The one hour microbus ride from Luxor to Qena cost us 7 LE (30¢) each. A quick shot of Qena: 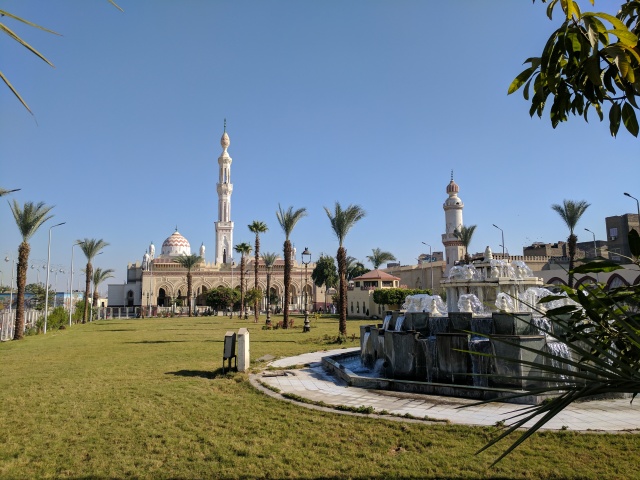 Asking random locals, “Dendera?” led to pointing fingers, and following the pointing fingers led us to a couple more microbuses. Eventually we got dropped off on the main road about a kilometer from the temple. We strolled by sugarcane fields, farmers, and donkey carts before we finally arrived to Dendera Temple. 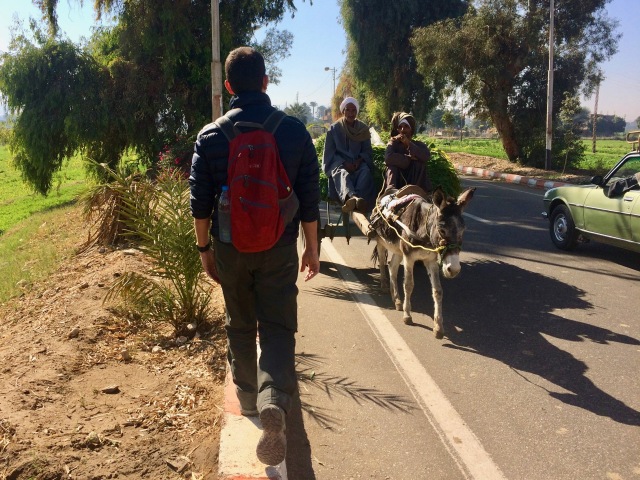 Considering that the famous archeological sites of Luxor weren’t overcrowded, it was no surprise that Dendera was quite vacant as well. In addition to the two of us, we shared the temple with only three other foreigners. Compared to other temples we had already visited, Dendera was amazingly intact and well-preserved, with most of its dark chambers and twisting stairways open to the public. 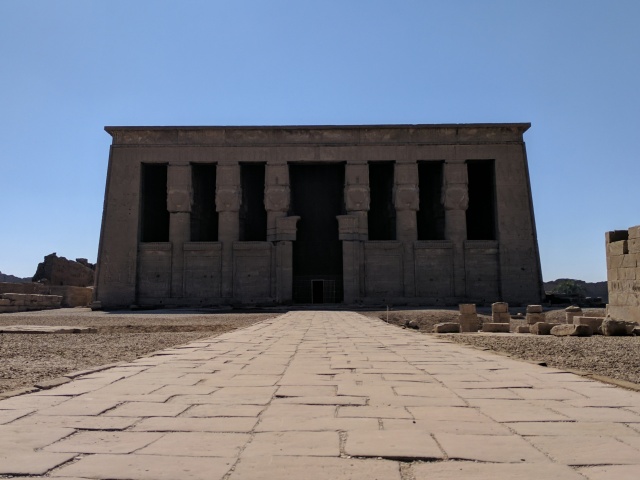 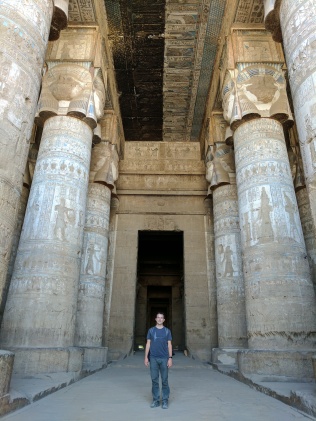 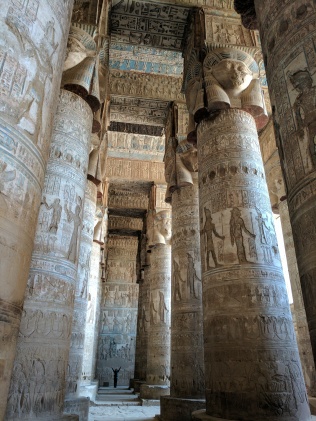 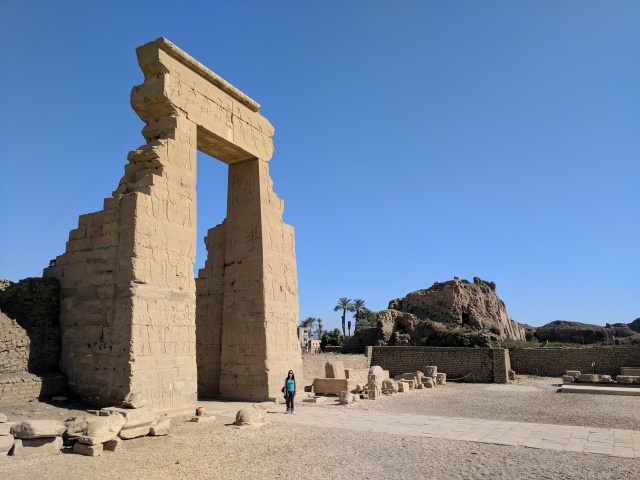 Due to security concerns, the police loitering the entrance took down our nationality information, but on our way out they took extra precaution by escorting us to the bus station. We had planned to walk to the main road and hitch a few microbuses back to Luxor, but these guys were serious. Not only did they give us a ride in their police vehicle, they walked us over to the bus, made sure we were comfortably seated, and kept eye on us until the bus departed the station. 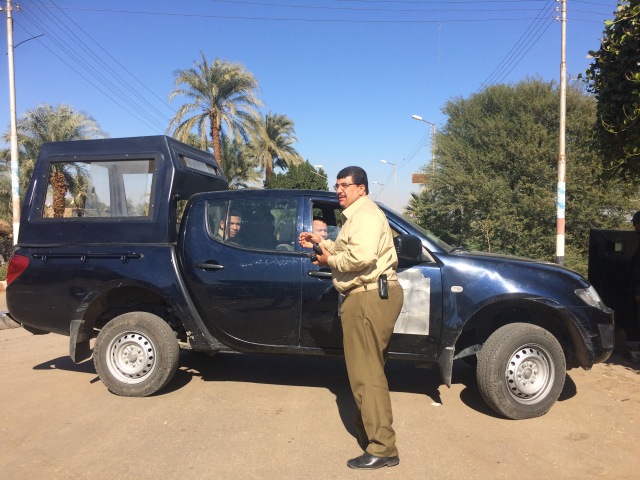 Surprised and slightly amused by the security concerns in such a remote location, we quickly looked up the possible reasons for the special treatment on our return to Luxor. Speculation has it that there is only special treatment for Americans. When tourists in other countries are affected by terrorism in Egypt, their media reports it once or twice and then forgets about it. American media on the other hand won’t shut up about it for weeks if its citizens are harmed by terrorism. Egypt is determined to protect its tourists (especially Americans, thanks to media); its tour industry has already been affected and they can’t afford to lose any more tourists!

What a wonderful time to explore Egypt, right?

Everyone should visit Luxor at least once. However, if you’re not an archeological buff like me, Luxor can get old quick. Within the magnificent temples are hoards of tourists (even in 2016 with a spiraling tourism industry) and “guards” preying on tourists for tips, and outside the temples are the most annoying and aggressive touts in all of Egypt. When we weren’t dodging crowds and tip beggars in the temples, we were dodging and practically running from touts on the streets. We often had to wonder if the temples’ grandiosity made up for the headache required to see them, and sadly, we think it just balances out.

This entry was posted in Egypt and tagged dendera, karnak, luxor, luxor temple, qena, temple of hatshepsut, touts, valley of the kings. Bookmark the permalink.