During our passing through of Montenegro en route from Croatia to Albania, we made a stop in Montenegro’s popular town, Kotor.  Day trippers from cruise ships and Dubrovnik flooded this town, but its old town and classic hike up the Castle of San Giovanni were still worth seeing.  Although busy with tourists, Kotor was at least nothing compared to the Disneyland-like Dubrovnik, and its old town felt more authentic and lived in than the old town of Dubrovnik.  Because it was also Montenegro, prices for everything were substantially cheaper–YAY!

First things first: crossing the border with a vehicle meant a mandatory €18 purchase of car insurance.  Fortunately that was easy.

After passing through several beach towns, we finally made it to the Kotor Bay coast, which offered pretty views reminiscent of Lake Como.

Outside the city walls: 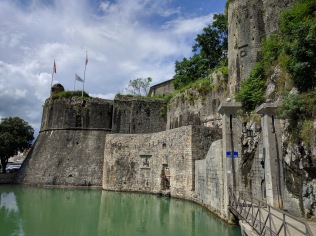 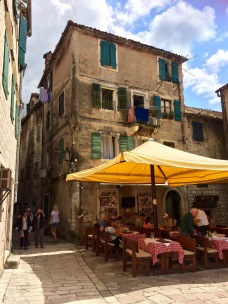 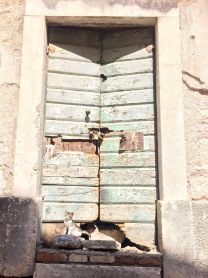 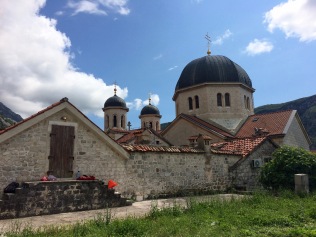 We also quickly discovered that Kotor was a town of cats.  Not only were dozens of cats lounging throughout the town, shopkeepers proudly displayed cat trinkets, statues, handbags, and souvenirs on their storefronts. 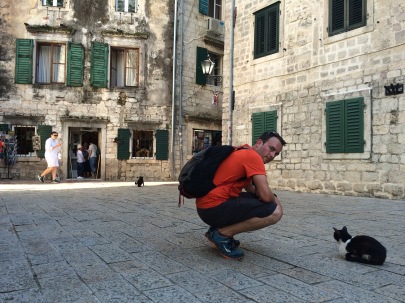 We waited a bit later in the day to hike up the formidable Castle of San Giovanni to avoid crowds and heat.  Before we set out, we stopped by a grocery store to buy a cold beer and cider for our summit.  We each paid €3 to walk up the uneven steps and stones, but had I known earlier about the FREE lesser-known pebble path beyond the north gate of the old town, I would have walked up that trail instead.  I would say that gazing down at Kotor from the castle walls was our highlight of the visit. 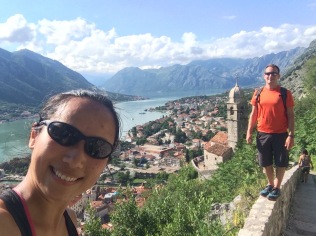 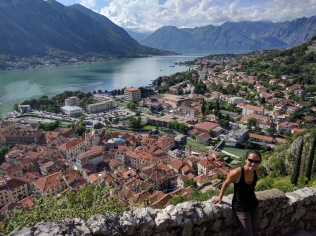 I wouldn’t say we raced to the top, but we did walk at a decent speed without any breaks and it took us 25 minutes to summit.  Our beverages were still nice and cold by the time we opened them.  There were also several entrepreneurs selling cold beverages along the steep steps. 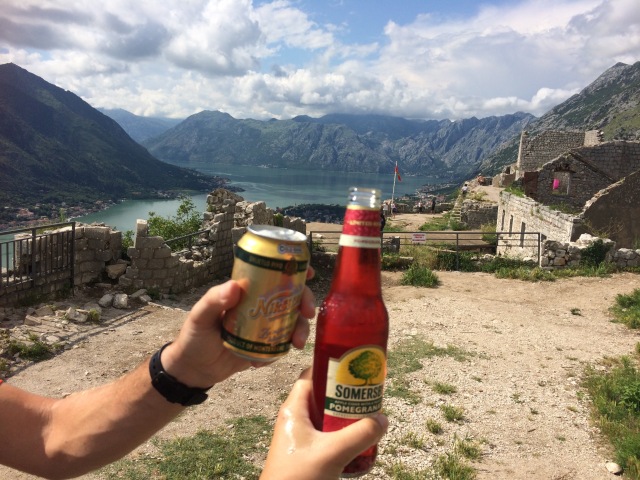 That night we wild camped in front of the castle ruins in the small town of Trojica, only about a 10 minute drive from Kotor and the last town before the 25 hairpin turns up to nearby Lovcen National Park.  We woke up early in order to drive the narrow road with as little traffic as possible (there were no cars at 7am!), but stopped at the highest viewpoint to have breakfast.  To be honest, the road wasn’t as horrific as people described it to be. Thanks to the smooth pavement and not-so-steep incline, we found driving up with a 5.8-meter long motorhome completely manageable

Continuing up the road, we finally turned onto a narrow, slightly crumbled road that led us into the national park.  We paid €2 each for entrance into the park.  Now the road became questionable.  Driving an old, fat motorhome up this road was a bit nerve-wrecking to say the least. 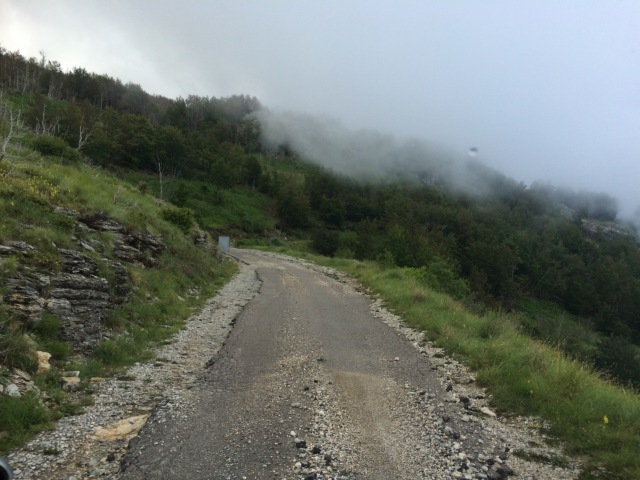 The point at which the road ended was just below the imposing Jezerski Peak, where 400+ steps up from the parking lot led us to the popular mausoleum of Petar Petrovic-Nejegos, a famous poet and philosopher of Montenegro.  It was questionable whether or not epic views of the mountains would be obscured or not by the low clouds, but we knew going up was a must.  After all, we did make it that far.

Looking down at the circular parking lot from the steps: 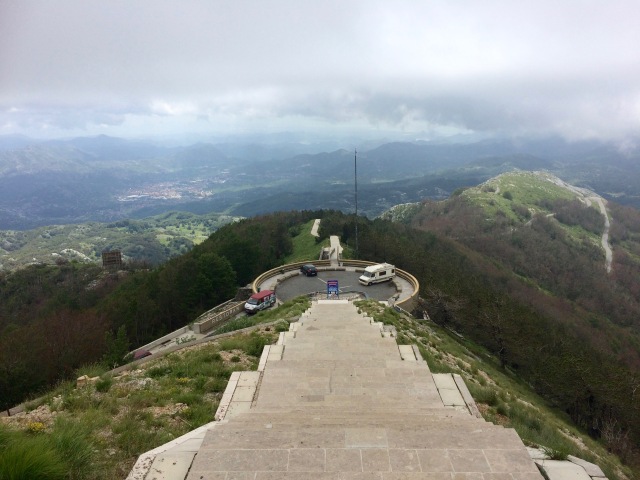 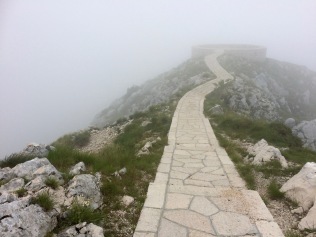 Looking back at the mausoleum from the viewpoint:

It didn’t take long for us to get discovered and kicked out.  Fortunately he didn’t speak much English so we couldn’t understand his ramblings.  Awesome way to end a trip in Montenegro, right?

Now it was time for Albania.

This entry was posted in Montenegro. Bookmark the permalink.