The ferry from Algeciras (Europe) to Ceuta (Africa) was more expensive than the ferry from France to England, but we knew the low cost of living + adventures would more than make up for the €225 ferry ride.  And we were right even with our first day in Morocco en route to Chefchaouen.

First, the ferry ride.  It was only a 1-hour ride, and it was 8am, so we just stayed in the RV. There were also only two vehicles in the entire ferry.

Second, the border crossing from Spain into Morocco.  Considering we didn’t do any research beforehand, I consider ourselves quite lucky to have crossed the border without too many hassles.  Maybe it was too early in the day for all the touts.  We did accept help from one non-pushy English-speaking tout, who ended up being incredibly helpful.  He gave us the forms we needed, walked us over to the correct officials, and explained what documents and vehicle papers we needed to present.  €4 and less than 30 minutes later, we were on the road again.

And third, money. Pulling out dirhams (DH) from an ATM wasn’t the issue; it was the toll booth we crossed before pulling out the cash that was.  The toll was 11 DH ($1.14) but we did not have a single dirham.  Toll booth dude wouldn’t take euros, not even a small bribe (amazing, huh?!).  He suggested we back out of the toll booth barrier, pull off to the side, and wait for the next driver to come by.  There was absolutely no one around, but within a few minutes we saw a car approaching the booth.  Chris was eager to wave them down with one hand, holding a €10 note in the other hand.

After a quick conversation (we are both so grateful that Chris can get by on French) and a money exchange, we pulled up to the toll booth again.  “Welcome to Morocco!” he smiled as he lifted up the barrier.  Ha, no shit.

We pulled out cash at the next major town of Tetouan and slowly zig-zagged up the windy mountain roads to Chefchaouen.  When I pictured Africa, I did not picture lush green mountains and cool, fresh air.  We weren’t too far from the Mediterranean after all–it was beautiful!

When we arrived, the town was alive and bustling–it was Sunday, market day.  Parking wasn’t a huge endeavor because Chefchaouen was merely a relaxed mountainside town.  Gawks, stare-downs, and shy waves of hello were the norm between us (the two tourists in a big, old RV with German plates) and the locals, and after more moments of awkward eye exchanges, we parked not far from the famous old town of Chefchaouen.  Now we could finally wander its famous blue streets. 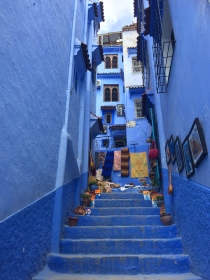 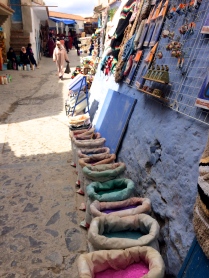 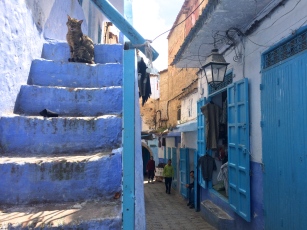 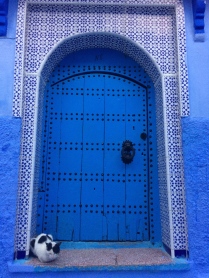 We even found an awesome spot in the village to spend the night, with a view overlooking the blue city. 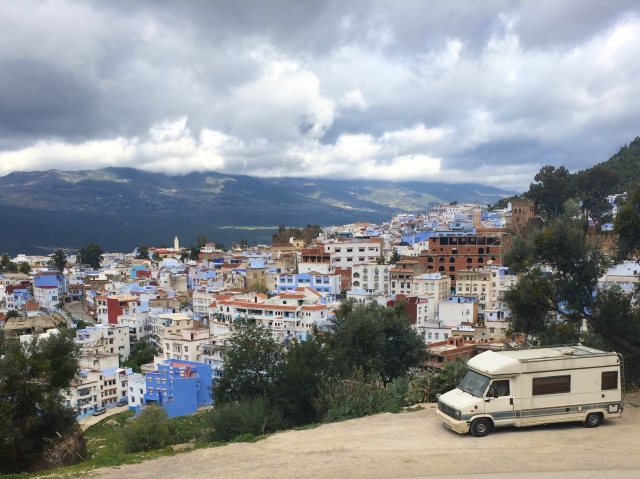 Getting lost in Chefchaouen’s old blue city was definitely the highlight of the area, although we also enjoyed getting off the beaten path to hike to the summit of Jebel El-kelaa.  Roundtrip was about 5 hours.  I highly recommend downloading the map of Morocco from the maps.me mobile app and following the trail.

And finally, the food. We had no idea what Moroccan food meant prior to coming to Morocco, and boy, were we in for a surprise!  Moroccan food = DELICIOUS.  The 1 DH (10¢) bread that everyone sold is comparable to focaccia bread…light, fluffy, and delicious. Even snails from street stalls were tasty.  Hot, flaky crepes with honey.  Mint tea, the national drink.  But perhaps the best were the Moroccan sandwiches.  Oh man.  I thought Vietnamese bánh mì were the most delicious ethnic sandwiches, but now I’m conflicted.  For less than 20 DH ($2.20), we were able to get a tasty sandwich with a side of fries.  We had sandwiches stuffed with cumin chicken, mashed potatoes or even French fries, roast beets, carrots, chili sauce, and so much more.  Amazing. 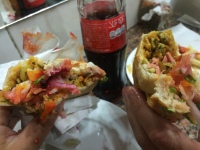 Chefchaouen was not only bluefully beautiful, it also carried the relaxed atmosphere of a mountainside town.  Sure, there were still touts, but they were not as aggressive or annoying as they are known to be like in the major cities of Fes and Marrakesh.  Good people and good vibes made it difficult to leave, but we were ready to dive into the hustle and bustle of Morocco.

This entry was posted in Morocco and tagged jebel el-kelaa. Bookmark the permalink.