All my friends told me Berlin was edgy, hip, and grungy.  Other than the murals and scribbles of graffiti sprayed every few meters throughout the city, I didn’t think it was that at all.  Maybe that thought will change when I see the rest of Europe, but for now I’ll say Berlin was incredibly clean and pleasant.  Even slumming it on the sidewalk waiting for a spätkauf, or convenience store, to open upon our arrival wasn’t too bad of an experience. 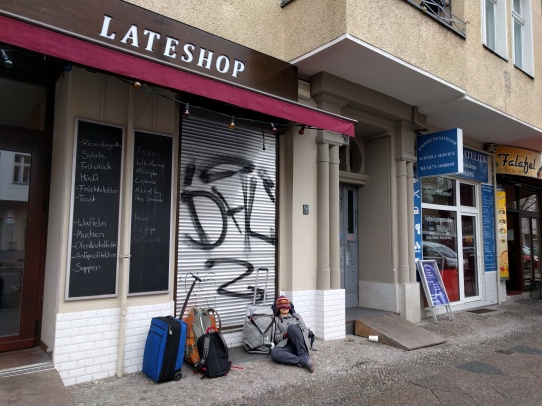 Graffiti like this could be found EVERYWHERE.  Seriously, I had never seen so much graffiti in my life. 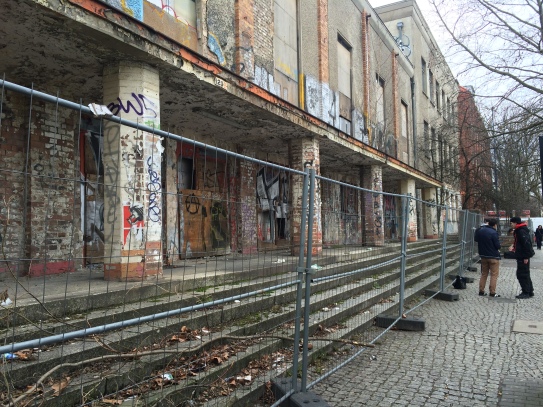 Major U.S. cities are often filled with filth, trash, and obnoxious people, and neither of these problems were to be found in Berlin.  A clean, incredible and extensive network of public transportation.  Polite, soft-spoken people.  Bakeries and flower shops at every corner.  Diversity in people, food, and culture.  Cheap beer and groceries. A grueling past from the Nazi reign in the 1930s, and socialist rule from 1961-1989.  This is Berlin.

Because we never tasted German food in our entire lives, our first dinner in Berlin had to be typical German food: heavy, comfort food-y, saucy, and something with a long name. The wiener schniztel wit kartoffel und gurkensalat (breaded veal with potatoes and cucumber salad) from Imbiss 204 in the Prenzlauer Berg neighborhood hit the spot. 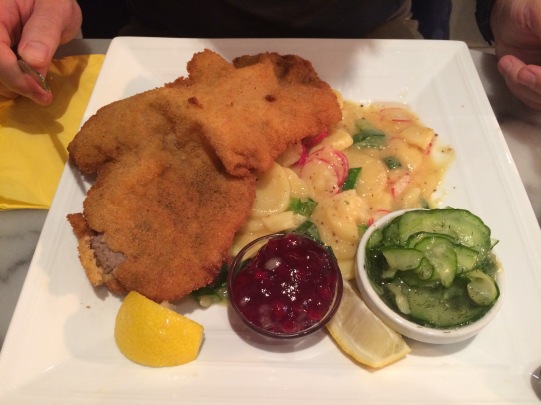 The streets and metro stations are filled with tasty fast food options, including waffles, soft pretzels, and sausages!

Germans are known for processes and efficiencies.  Why can’t we bus food trays like this in the U.S.? Hmph.

The main walking attractions in the tourist area include Reichstag, the government building.  We didn’t pay to go up into the dome though.

Brandenburg Gate once marked the entrance into the city:

The Holocaust Memorial was beautifully haunting: 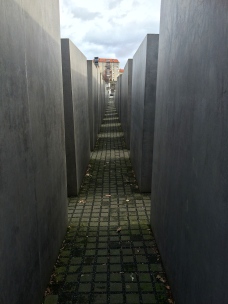 The free Topography of Terror not only provided detailed information about the Nazi regime, but also a 200-meter fragment of the Berlin Wall.  At least 136 people died at the Wall, the majority of them in attempt to flee from East Berlin to West Berlin.

Fragments of the Wall stand throughout Berlin as displays, but my favorite display was the East Gallery.  This 1.3 km section of wall consists of paintings by famous artists from all over the world.  Naturally, the murals have been defaced by local graffiti “artists.” No visit to Berlin is complete without strolling along the river and the East Gallery!

Berlin was the perfect first Euro-stop not just because it was an easy city to become accustomed to, but because our incredibly hospitable German friend housed us in his flat–while he was off vacationing in Thailand!  It was like a free airBnB all to ourselves.  Despite all the awesomeness the Germans have, I will admit one thing.  I don’t think I can get used to a washing machine in the kitchen. =P

This entry was posted in Germany, Uncategorized and tagged berlin, berlin wall. Bookmark the permalink.