Istria – Our Intro to Croatia

Croatia’s northernmost coast is the Istria peninsula, the largest peninsula in the Adriatic sea. Naturally this was our first stop in Croatia after crossing the border from Slovenia. Because Istria’s largest city, Pula, stood out from the rest of Croatia with its ancient Roman ruins, I figured it would be a decent base to start, and from there we’d figure out where to go next.

Although Croatia recently joined the EU in 2013, it didn’t feel like the rest of the EU at all.  The different currency (Croatian Kuna, or KN) didn’t help either.  Most importantly, the more developed EU countries such as Spain, France, Germany, and Italy had provided us countless free motorhome services and overnight stops, while Croatia had none.  This meant paid campgrounds were the only options.  I also wasn’t too happy to discover that all the paid campgrounds in Croatia were costlier than the ones in the more developed EU countries.  €30 per night? Are you kidding me? This meant I’d have to get creative. Real creative. So I did.

Because our night in Pula was our first night in Croatia, we agreed to pay the €27 for one night of camping at Camping Stoja.  When we arrived, I noticed that the block in front of the campground was a free parking lot for the beach.  If we hadn’t needed electricity or water, I would have wanted to wild camp there.  It was definitely possible! We also paid the lowest price; prices were higher for beach views.  Our first night at Camping Stoja made me determined to camp with beach views throughout Croatia for free.

One perk of Camping Stoja was the bus stop directly in front of the campground.  For 11 KN ($1.65) each, we rode the bus into the historic city center of Pula.  Within 10 minutes we felt like we were back in Rome, minus the crowds and touts.

Pula Arena, the 6th largest Roman colosseum in the world: 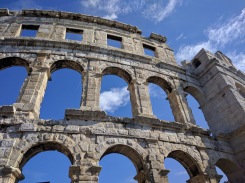 Arch of the Sergii:

It didn’t take long to explore all three ancient ruins, and we soon found ourselves back in Stoja to enjoy the crystal clear water of the nearby beaches.  Ruins and beaches–yay!

The next day we enjoyed a beach hamlet in the Instria peninsula–Brsec Beach, just over an hour’s drive north from Pula along the coast.  We even picked up a couple of hitchhikers from Berlin who ended up spending the beach day with us. 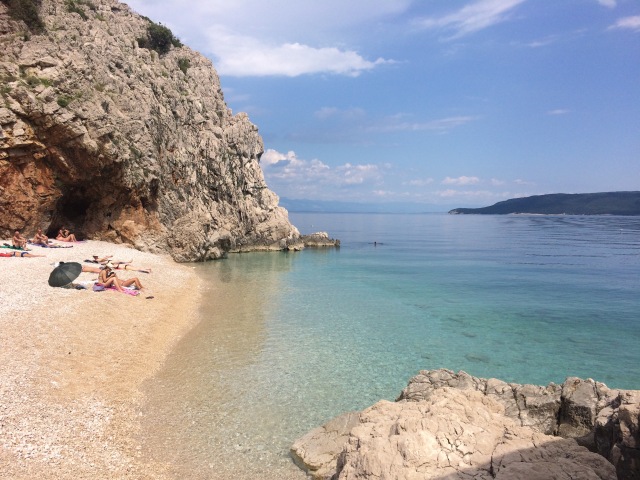 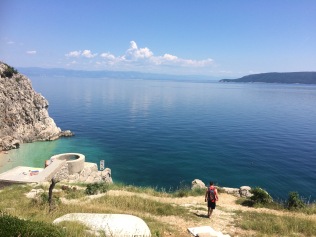 Our goal for the next day was to make it to Split, Croatia’s second-largest city.  We left the Istrian peninsula, dropped off our new friends at their next destination, and headed south. As we drove, I studied the map for a potential place along the coast to spend the night.  I randomly picked the village of Rovanjska and it turned out to be the absolute perfect place to spend the night.  We exited the freeway, drove to the village beach, and parked just in time to watch sunset. There was absolutely no one else except for a fisherman in his boat.

We had just left the refreshing Slovenian mountains and now had the Croatian coastline to explore.  I couldn’t wait to find more coastlines where we could overnight for free. =)

One last thing.  I bought this minced beef pastry at the grocery store for about a dollar and I have no idea what it is called.  Whatever it is, it’s AMAZING. Anyone know what this is called?

This entry was posted in Croatia and tagged brsec, pula, soja. Bookmark the permalink.