Let’s face it. There really isn’t a whole lot to do in Cologne.  It’s just another big city (Germany’s 4th largest) with plenty of shopping, restaurants, and museums.  And a handful of bridges and a zoo.  We also happened to be in Cologne on a Sunday, which is the worst day to explore any city in Germany because everything is closed.

First things first.  We spent our first night about 3 km north of the cathedral along the river, just down the street from the zoo, at a €10/night stellplatz (Reisemobilhafen Köln). Surprisingly, there were quite a few RVs when we arrived.  However, the next day when we strolled along the river into town, we discovered that there was cheap paid parking along the entire river Monday through Saturday, 8am-6pm, €0.50/hour, €4/day, €24/week, and free on Sundays!  What caught our eye was the number of RVs parked along the river.

One van parked with the spires of Cologne Cathedral in the distance: 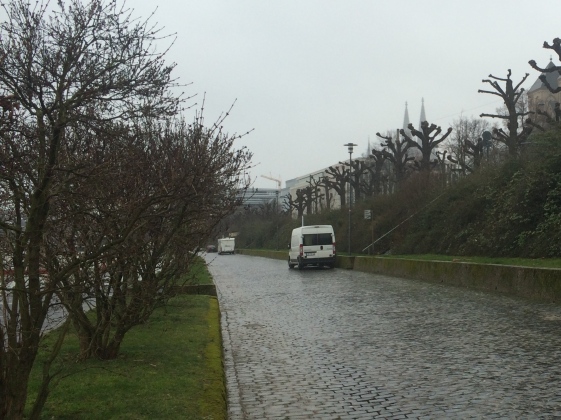 When we returned to our RV after touring Cologne for the day, we quickly moved to this parking strip.  Because it was Sunday, we spent the night there for free. 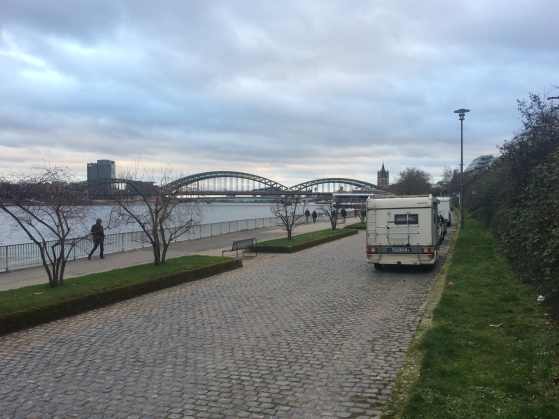 The view from inside our RV:

And finally, the famous Cologne Cathedral.  This gothic cathedral puts any other cathedral to shame–it’s Germany’s most visited landmark!  From afar, it sticks out spectacularly, begging to be photographed as its two spires gives it the largest façade of any other church in the world.  Up close, the details from the sculptures, to the spires, and to door knobs are phenomenal.  I am by no means a religious person, but I, along with anyone else, can gawk at the wonders of its architecture and construction.

Walking around the outside:

A close up of details:

Inside, when a Sunday service was taking place: 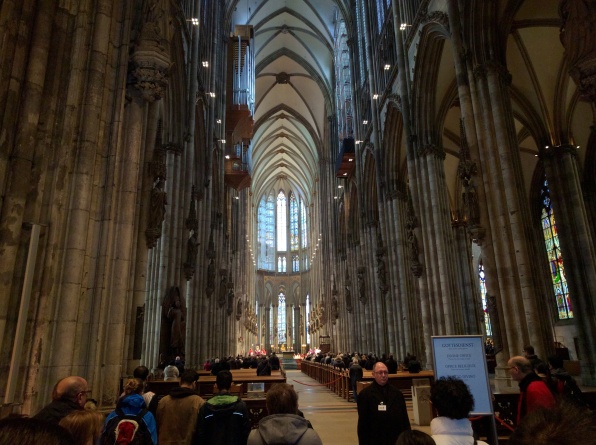 We didn’t go on the €12/person tour, but we did climb the 509 steps up the South Tower for €2/person. Although we couldn’t see the largest working clanger in the world (it was kept hidden behind a locked door), we happened to be in the stairwell at the hour and we were able to feel the vibrations of the bell.  It was a dizzying way up the South Tower: 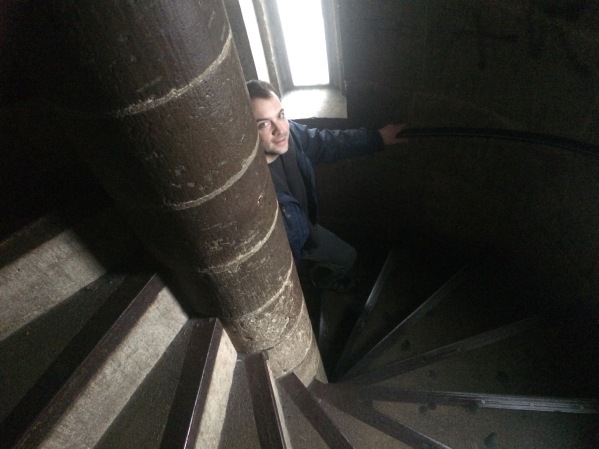 From the top, our rarely-felt fear of heights kicked in for both of us.  Looking down at the church and its spires was creepy as hell:

Looking up didn’t help either.

But at least looking out into the distance granted views of the city.

Perhaps the best time and place to view the Cologne Cathedral is at night when it is illuminated, and across the bridge.  On our way to the bridge:

To our delightful surprise, we discovered that the entire bridge wall was covered in love locks.  Never in our lives had we seen literally thousands and thousands of love locks.  It was quite the sight.

And here is the best sight of all: 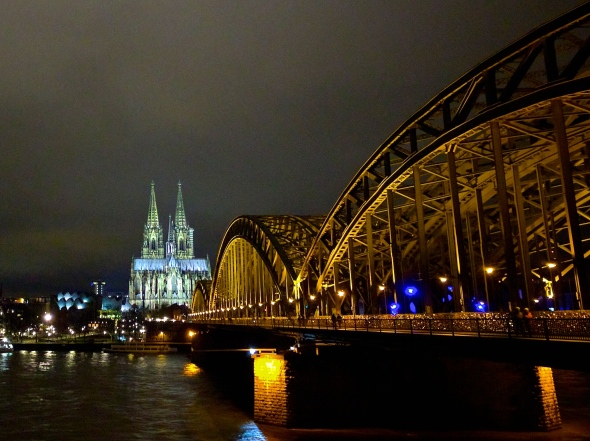