I wonder how often Bremen is overlooked by Cologne and Hamburg, because I had never heard of it until I looked at a map for a place to stay in Northern Germany en route from Cologne to Copenhagen. As soon as I saw the charming buildings online, I knew I had to stop by. It resembled a cross between Munich and Rothenburg, an enchanting blend of neo-gothic and charming medieval architecture. Bremen was and still is a major port city as it is situated along a river that empties out into the North Sea. Our morning spent in Bremen was definitely a memorable and lovely one.

We spent the night at Reisemobilplatz Am Kuhhirten (€13 per night, €1 for toilet access, and another €1 for a 5-minute shower, free wifi, plus the RV extras), about 1.5 km from Bremen’s historic town square. Although there were only 3 RVs in February, I could tell this was a popular camping site in the summer based on the size of the lot.

In the morning we crossed the bridge and walked over into the heart of Bremen. Within minutes of crossing the bridge, we arrived to the striking Markt, bordered by a lovely cluster of buildings, the UNESCO World Heritage Bremen Town Hall and Roland Statue, and the St. Petri Cathedral.

The most eye-catching set of buildings at Bremen Markt:

With the Roland Statue (Bremen’s protector): 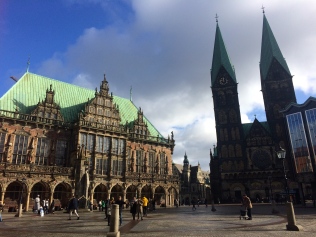 Just on the other side of the Town Hall was the small yet famous statue of Grimm’s Town Musicians: 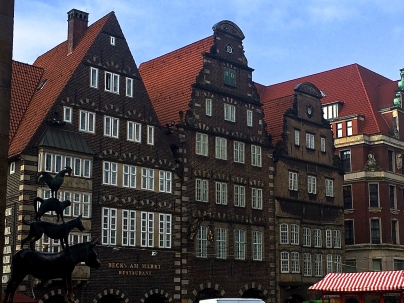 Sadly, in the winter the towers of St. Petri Cathedral are closed. If you ever have the chance, climb to the top of the towers for an incredible view of the town. This is the dramatic cathedral: 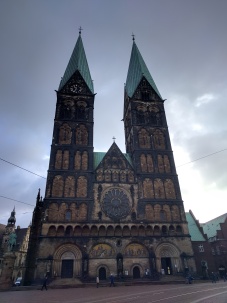 Beyond the cathedral was the Wochenmarkt, basically a large, open-aired farmers market. All the fruits, cheeses, meats, and breads looked tasty.

Not far from the town square and market was the must-see Schnoor neighborhood, a windy and narrow cobblestoned street adorned with tiny shops and cafés.

There were cuter versions of the Musicians of Bremen statue too. 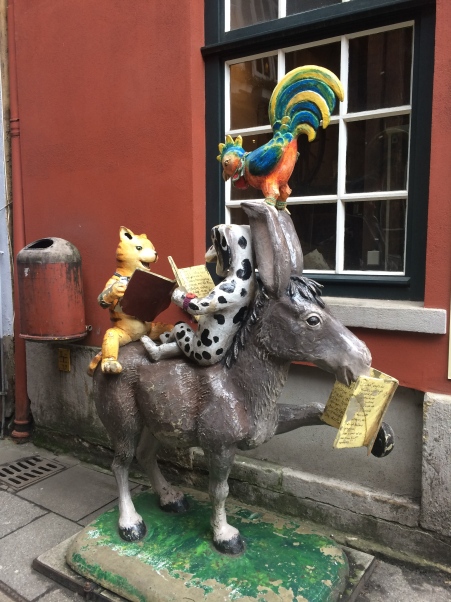 Like in Munich, I enjoyed walking through the Bremen Markt again and again, gazing up and around at the incredible architecture. And like in Rothenburg, I stopped frequently in the tiny streets to marvel at the charming buildings and window displays.