Nimes and its surrounding area has some of the best-preserved Roman sites in the world, including an arena, a temple, and a spectacular aqueduct. Due to its convenient location between Spain and The French Riviera, we made the detour to view these stunning yet seldom visited sites.  At the time of writing, the arena is awaiting UNSECO site status; I do wonder if the ruins will be tainted by tourists in the future.

It is not recommended at all to drive into the city center.  We parked in one of the many giant parking lots not far from the arena, and took the tram for €2.60 each (roundtrip) from the Costieres-Parnasse station to the Arenes station.  Pretty easy and convenient!

Immediately upon stepping off the tram, the spectacular site of the Roman arena burst into clear view.  It cost €10 to enter the arena or €12 to enter the arena and the Roman temple.  To our surprise we learned that the arena continues to be used as a venue for concerts and festive bull fights.  It’d probably be cooler to experience the ancient arena through a show rather than a tourist ticket.  As always, we simply enjoyed the arena from the exterior. 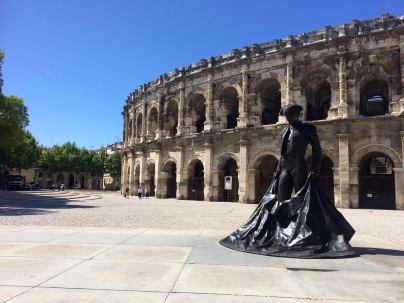 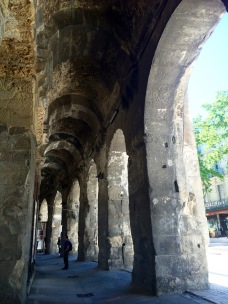 Just a few minutes’ walk from the arena was the ancient Roman temple, a gleaming limestone temple representing classic Roman architecture.  Surrounded by a modern downtown, this temple definitely stuck out. 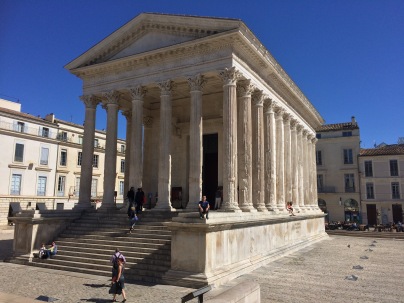 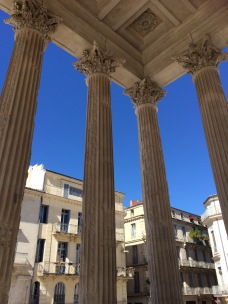 We waited until later in the day to visit Pont du Gard due to the information I had gathered.  Unlike the aqueduct smack in the center of Segovia, France’s famed Roman aqueduct spans a river amidst rural hills and woods about a 40-minute drive northeast of Nimes.  Unlike the arena, this aqueduct has attained UNESCO status, and as a result, it gets crowded and has the price tag of €18 per vehicle/up to 5 people.  What does the price include? Well, obviously access to the aqueduct, and access to the museum and shops.  Once the shops close (times vary by season) then the price drops to €10 per vehicle/up to 5 people.  Even if visitors enter by bicycle or foot, they must pay a reduced fee.  Seriously???

Upon looking at my trail map of the area, I saw that numerous hiking trails led to the Pont du Gard.  With gorgeous weather and plenty hours of daylight remaining we decided to hike in.  Not only was it a lovely hike, we were able to avoid the entrance fees. =)

First, we parked our motorhome at this free parking site.  Then we found the well-marked trailhead.  We ignored signs for Pont du Gard (we’d have to pay if we went that way), and hiked to Le Sablas instead.  From Le Sablas we easily made our way to Pont du Gard.  It took a bit over an hour from the parking lot to the aqueduct.

As we approached the aqueduct, we found ourselves hiking above or beside aqueduct ruins.  We had to wonder how many tourists made it out this far. 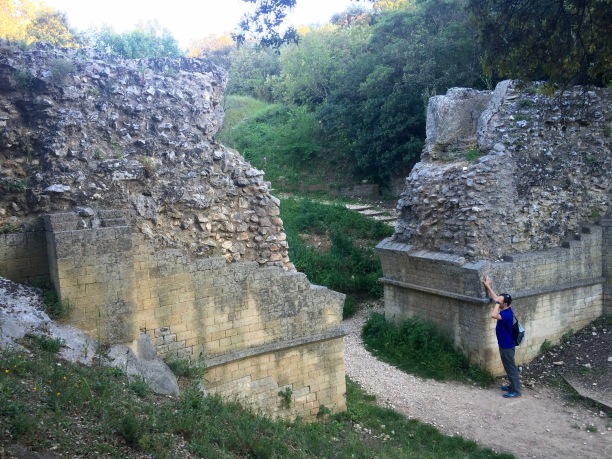 By the time the aqueduct came into view, the lighting was phenomenal, granting us a picture perfect view of the illuminated facade of the arches. 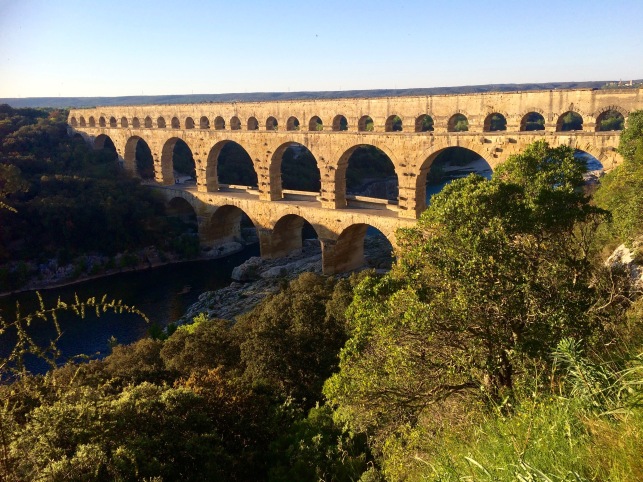 Because it was so late in the day, there were hardly any visitors.  All the shops had closed and all the employees had gone home.  We walked back to our motorhome via the normal road, enjoying a deep sunset stroll through a quaint French town.  Trees and vineyards lined the road, and in the distance a medieval town and its church tower beckoned us in the fading light.  Despite the number of preserved Roman ruins in the area, the charming landscapes and towns in Nimes were still oh so quintessentially French.

This entry was posted in France and tagged arena of nimes, pont du gard. Bookmark the permalink.