I’ve always said California has everything, and that was before I even knew that California also has the highest AND lowest points (both within ~100 miles of each other) in the contiguous U.S!

Last year in Death Valley, we sauntered along Bad Water Basin, the lowest point in the U.S. at -282 feet below sea level. This year we figured we’d summit the U.S.’s highest peak, Mount Whitney, at 14,497 feet tall.

By mountaineering standards, Mount Whitney is relatively easy to summit. Between summer and fall, anyone in decent shape can summit the mountain—no mountaineering experience required. As a result, the 22-mile out and back trail from the east in Whitney Portal is an incredibly popular hike–so popular that a permit is required to summit. Summiting from the west side in Sequoia National Park isn’t limited, but it requires a multi-day backpacking trip instead. An early spring lottery typically distributes all available permits for the hiking season (100 day hikers + 60 backpackers), but no-shows abound the autumn off-season. We walked into the Eastern Sierra Interagency Visitor Center in Lone Pine at 11am on the day of our planned hike, snagged a couple of permits, and set off for Whitney Portal. 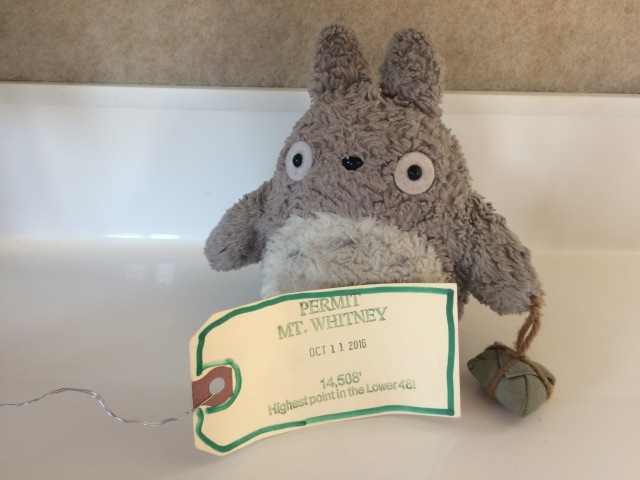 At the trailhead lies the popular Whitney Portal campground, suitable for those summiting Mount Whitney, but at $22/night for nothing more than pit toilets and picnic tables, I preferred to boondock in the stunning Alabama Hills just 12 miles east of Whitney Portal. In addition to being free, the surrounding landscape was stunning and vacant. I wouldn’t have had it any other way. 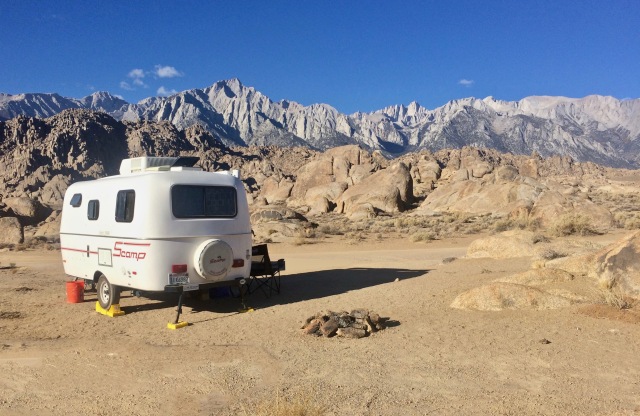 I had never heard of Alabama Hills until I came to summit Mount Whitney. Apparently these wonderful rock formations are well-known in the Hollywood industry; multiple films such as How the West Was Won, Gladiator, and Iron Man were filmed amongst the rock formations with the Sierra Nevada mountain range in the distance.  Preparing dinner outside in this Hollywood backdrop was glorious. 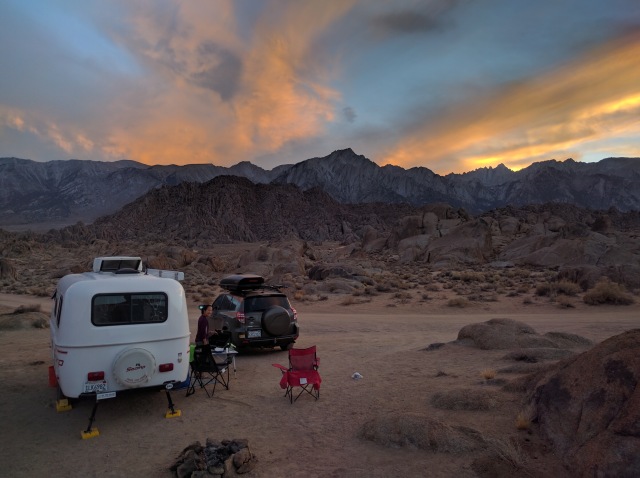 One iconic landmark within the Alabama Hills is the Mobius Arch, particularly for its signature framing of the Mount Whitney crags in the morning. 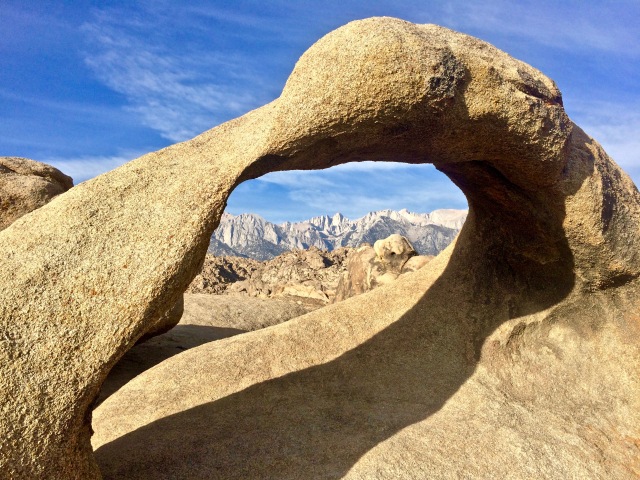 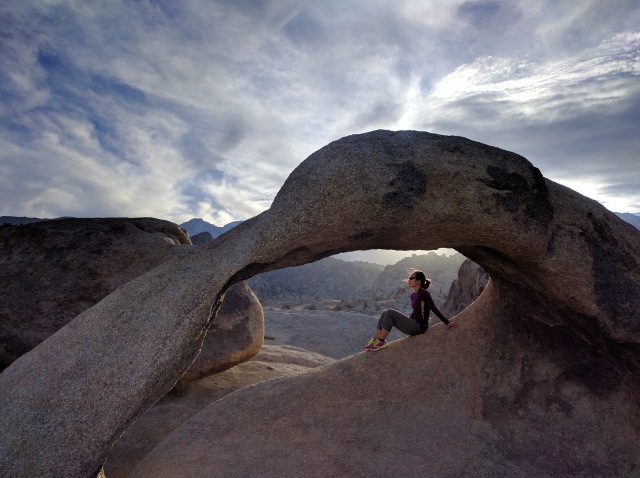 We left our trailer behind in the Alabama Hills while we set out for our 2-day/1-night backpacking trip to the Mount Whitney summit. Since we only snagged permits at 11am that morning, we didn’t hit the trail until a little after 1pm. We only had 5.5 miles to hike until we reached camp, which turned out to be a beautiful trail with picturesque meadows and trees. 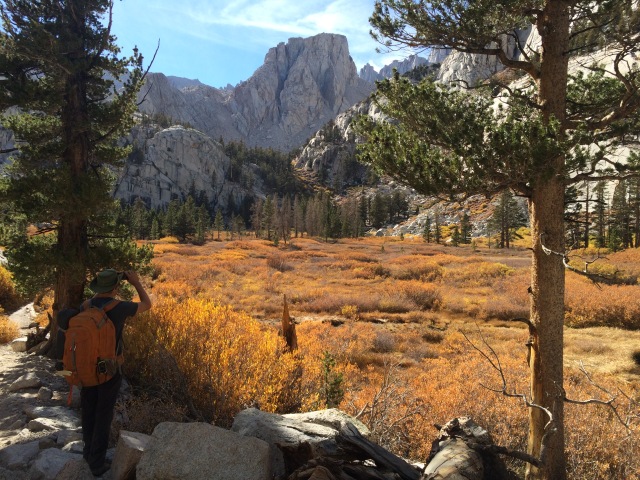 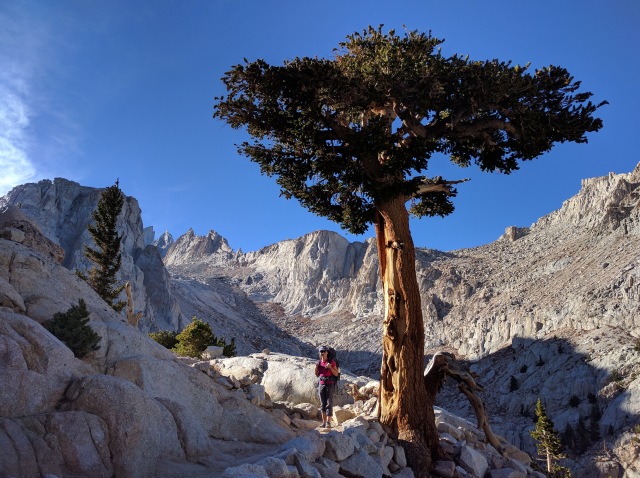 A ranger told us that the popular Trail Camp was exceedingly popular, so we camped just about a 5-minute walk east of Trail Camp along Lake Consultation. Not only was it more peaceful than Trail Camp, the views were more phenomenal. 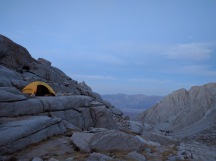 We kept our bear canister a distance from our tent. 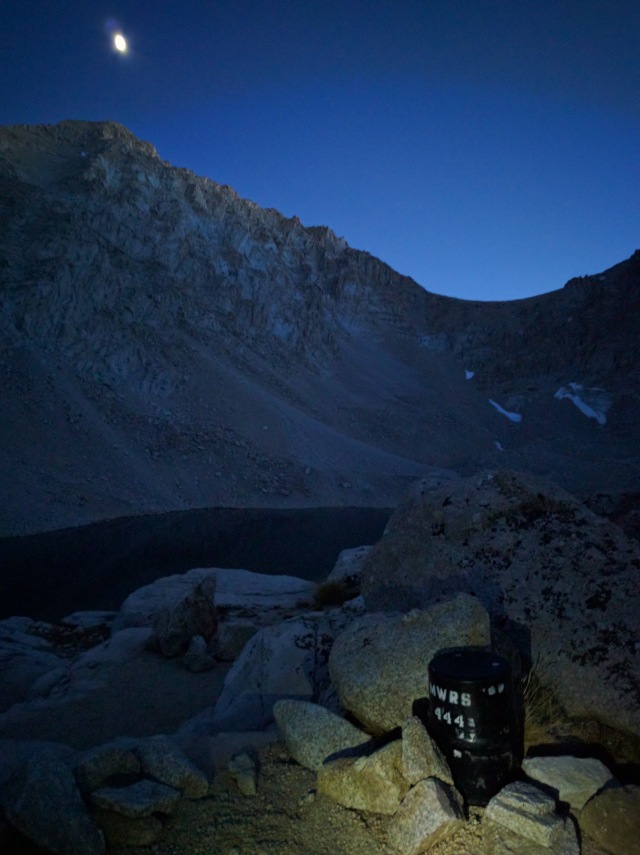 After a crappy night’s “sleep,” we awoke at 3am for a Mount Whitney sunrise summit. Hiking in the pitch dark passed by quickly, and the first glimmer of light filled me with apprehensive excitement. 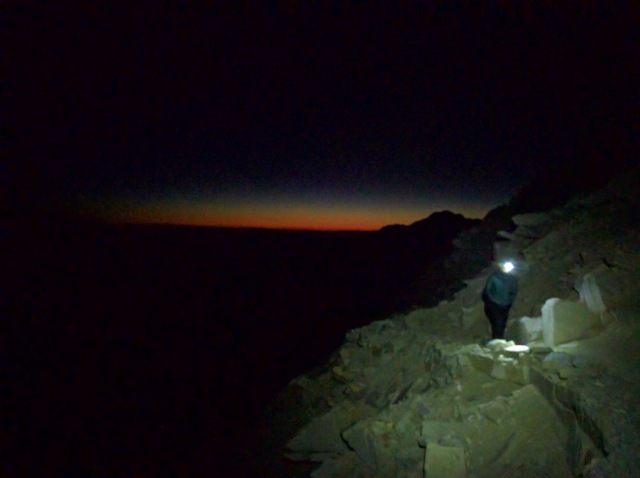 We made it to the glorious crags just before alpenglow. 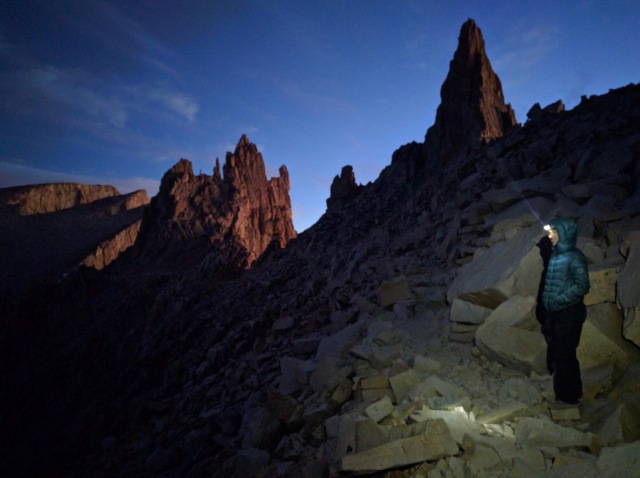 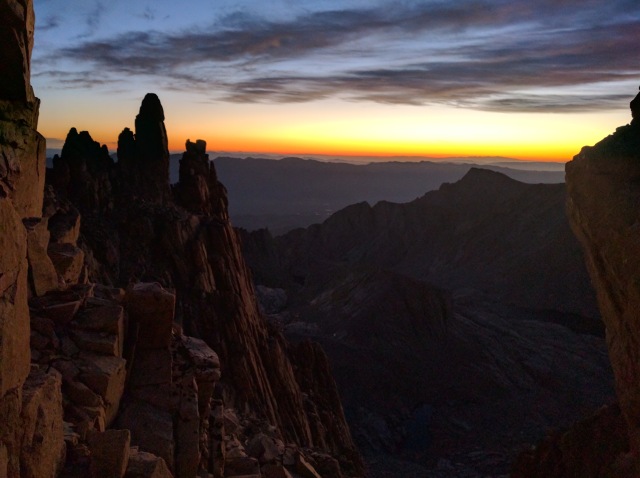 Sunrise between the crags: 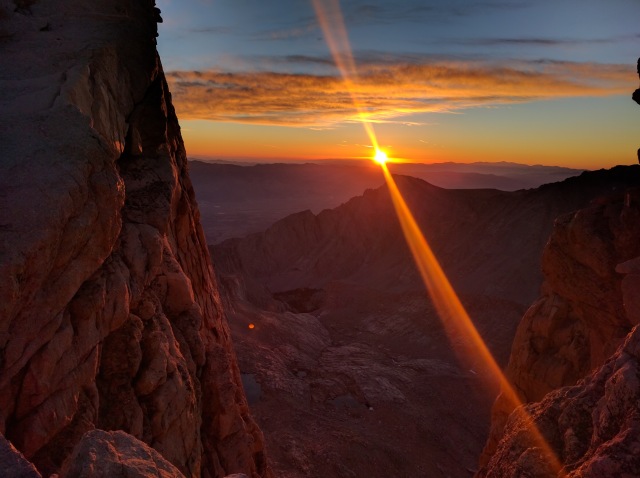 Alpenglow looking to the west in Sequoia National Park: 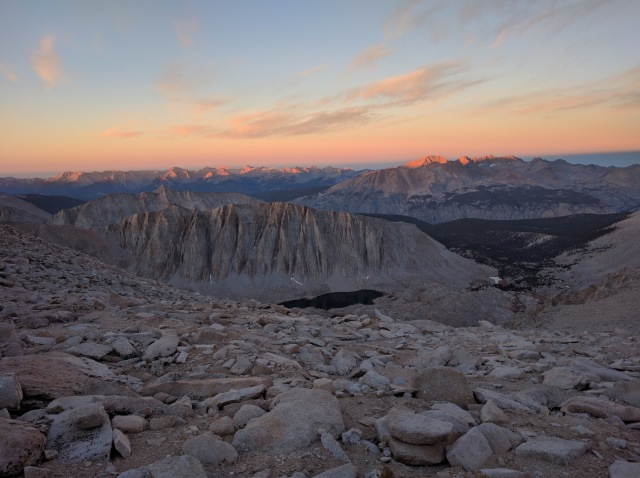 Almost to the summit: 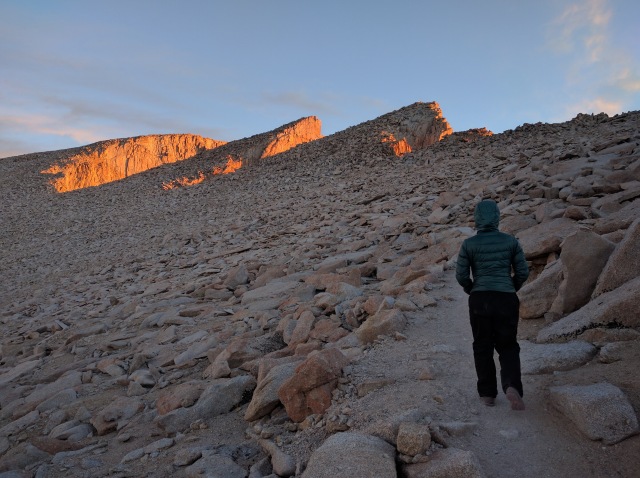 And finally, the summit! 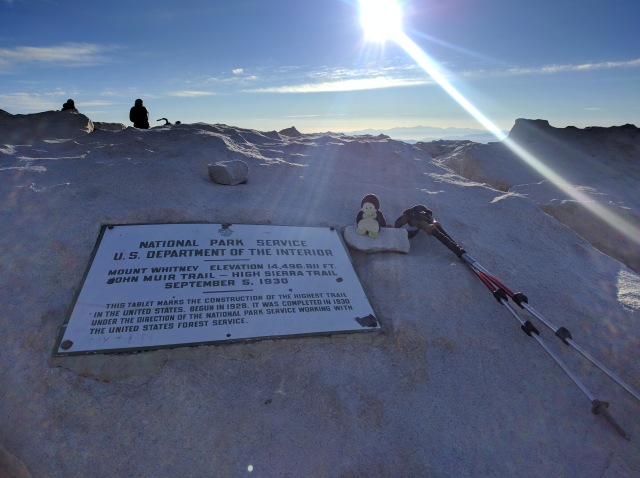 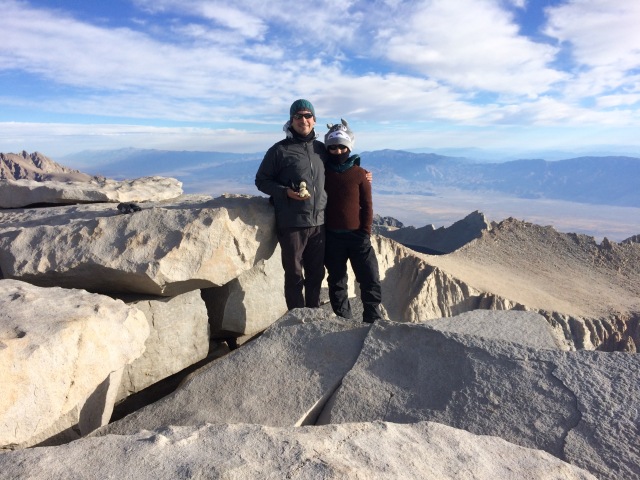 There was even a hut at the summit, apparently for hikers who unfortunately get struck by lightning. Lesson: Don’t attempt to summit if it looks like rain! 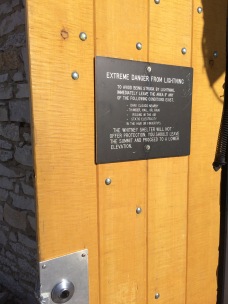 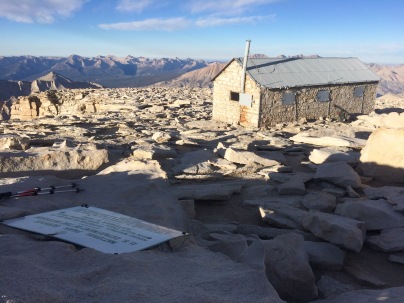 On the way back down, we quickly realized how hiking in complete darkness was probably a better idea than hiking in daylight. The darkness had prevented us from seeing just how steep all the switchbacks were! There were multiple moments where we looked up incredulously, exclaiming, “We hiked up all that?!”

As opposed to seeing only three other hikers for a sunrise summit from the east side, there were dozens of hikers attempting to summit after 9am–on a weekday in October! Fall offered us not only windless, perfect weather for hiking, but also plenty of permits to snag at the last minute.  We’ve summited plenty of conical mountains and volcanoes, but none craggy at the top.  Thanks to Mount Whitney’s unique rock top, we witnessed an incredible summit alpenglow and sunrise.  And thanks to the nearby Alabama Hills, we were able to camp in a movie set…for free! Even for those not interested in summiting Mount Whitney, the Alabama Hills are well worth the visit.