Ever since I stumbled upon Rhyolite, a ghost town of respectable size in Nevada, I learned more about the handfuls of poignant mining/gold rush ghost towns of California. Of the ghost towns, Bodie was the most notable but relatively distant from any major city, and the thought of visiting Bodie had remained in the back of my mind ever since. As a resident of California, I knew I’d eventually see it—it was only a matter of when, and once again I found myself east of Yosemite, not inconveniently far from Bodie. Time to go!

The state has turned the ghost town into a historic state park with an entry fee of $8/adult, which is used to preserve the town. Unlike many parks, Bodie literally is nothing more than a ghost town with well-spaced apart dilapidated buildings, dusty artifacts, and the remainders of once busy streets. Campgrounds, trails, and picnic areas can’t be found anywhere near Bodie.  Also, unlike other ghost towns that have revamped into kitschy tourist attractions, Bodie remains in “arrested decay,” or in the same historic condition it was left in.

As a result we left our trailer on national forest road at Mono Lake and drove the 45 minutes to Bodie Historic State Park.  Our free boon docking spot at Mono Lake:

Bodie began as an ore mining camp, and later “boomed” when profitable amounts of gold were discovered in the mines.  A remaining mine as seen in the distance:

Like in many romantic, Wild West stories, thousands of hopefuls flocked to Bodie, making the once tiny mining town flourish to a population of 5,000-7,000 with 2,000 buildings at its peak. There was a church, school, fire houses, railroad, jail, red light district, and dozens of saloons. 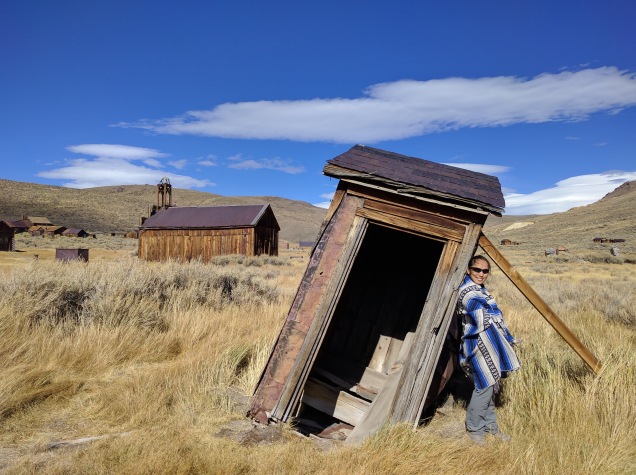 Numerous buildings are left in their original state, with homes adorned with furniture and wallpaper and stores stocked with shelves and goods.  People are allowed to roam the deserted, dusty streets that were once bustling with people, life, and brawls.  Remnants of artifacts can still be found on the ground, such as bottles and pieces of furniture and chinaware, but taking them is prohibited. (And apparently there is a curse cast upon those who take artifacts!)  Ogling over the exteriors of the building is already awe-inspiring; peeking into the buildings is even more so. 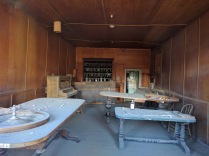 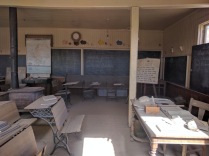 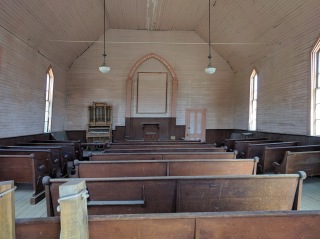 Ghost towns are beautiful, fascinating, lackluster, and romantic.  I find myself easily drawn to them, and it’s hard to say exactly why.  Compared to other countries, we can’t say America is really old; Bodie itself isn’t over 150 years old.  Perhaps because this is the “real” America–rugged and wild, and always will be.

This entry was posted in California and tagged ghost town. Bookmark the permalink.