We knew we had to take Scromp out one last time before tucking him away for 6 months as we tour Europe. The question was where? California is spoiled with state and national parks and recreational areas. Three days before the weekend I had my heart set on Redwoods National Park but a friend mentioned Pinnacles National Park. I had never heard of it, so I casually looked it up. And WOW. 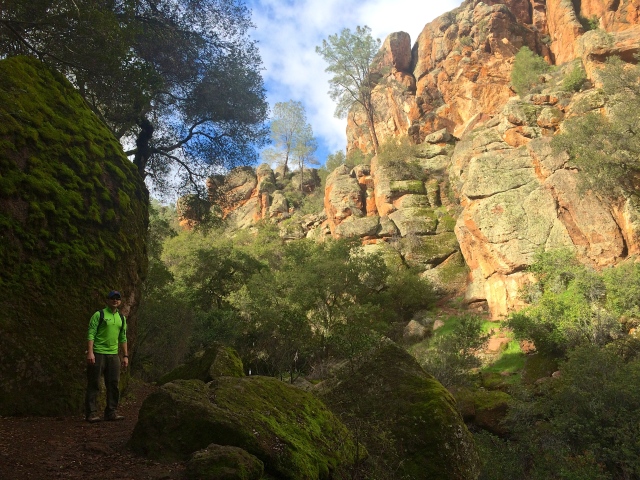 Despite the millions of people who live in Silicon Valley, only a small percentage of people know of this new national park just a couple hours drive south from the Bay Area. Pinnacles had been a national monument but got “promoted” to national park status in 2013, making it the newest national park on the list (#59!). The park itself is quite small, with parking lots so limited that park shuttles run regularly during busy weekends. All the trails could be hiked in a single weekend (I think there are only 30 miles of trails), but the trails offer outstanding views of geology and plenty of rocks to climb. AND ONLY 2 HOURS SOUTH OF THE BAY AREA. 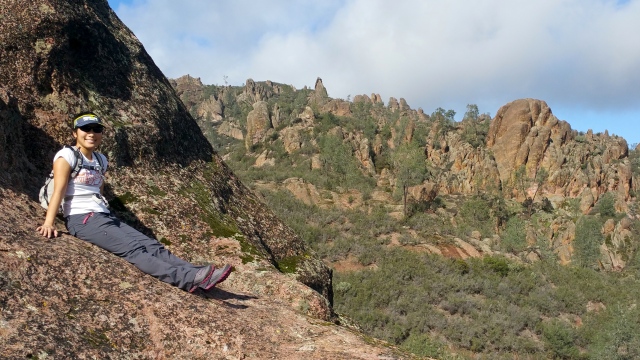 With its smack-center location in California granting dangerously high temperatures in the summer, the popular seasons to visit are from fall to spring. We arrived mid-January and hiking temperatures were perfect during the day—mid to high 50’s. There were pros and cons for coming the day after one of many El Nino storms. The pros? Numerous sightings of rare California condors, lush, green hills, gushing streams and waterfalls, fuzzy, moss-covered boulders and tree trunks, puffy clouds, and a relatively empty park. The only con was the closure of both caves due to flooding. The Bear Gulch Cave and Balconies Cave are not caves but taluses, which are cave-like tunnels formed from fallen boulders. Several bat species live and breed in the caves, but we didn’t see any. Fortunately there was so much else to see!

Because there was nowhere to boondock outside of Pinnacles National Park (private property and farmland all around!), we ended up camping for two nights at the private campground within the park. Luckily it was only $23/night for a basic campsite (not bad for a national park!), or $36 for a RV site with electricity. With it being the low season, there were more than plenty of campsites to choose from. Anyone from the Bay Area can simply drive down for the day, hike, trail run, or rock climb, and return home by evening, but we had to spend time with Scromp! 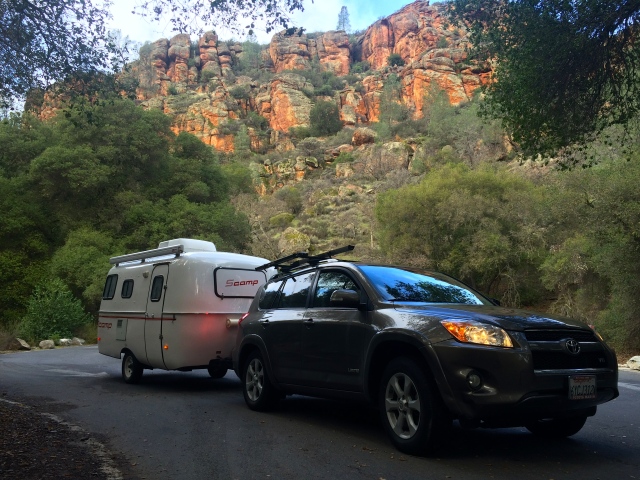 Now for the hiking. Numerous loops and combinations of loops can be made for day hikes, but after learning of the closure of Balconies Cave and knee-high creek crossings of West Fork Chalone Creek, we settled with a shorter 9-mile loop from the Bear Gulch Trail to the Bear Gulch Reservoir to High Peaks Trail and back.

Hiking along the Bear Gulch Trail:

The trail through the Bear Gulch Cave was evidently flooded. 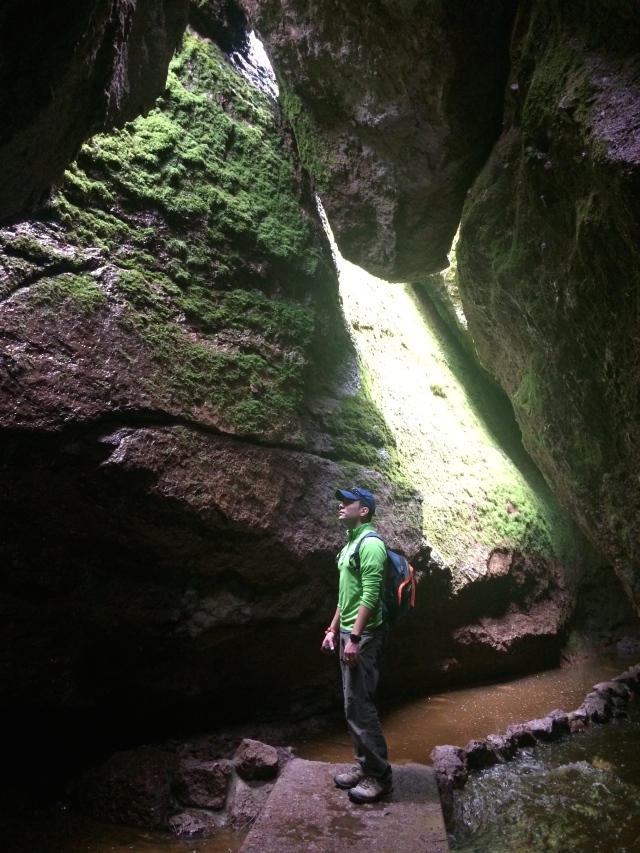 Instead of hiking through the cave, we had to hike around it.  Because the cave was actually a talus, we were able to spectate the dislodged, giant boulders from above. 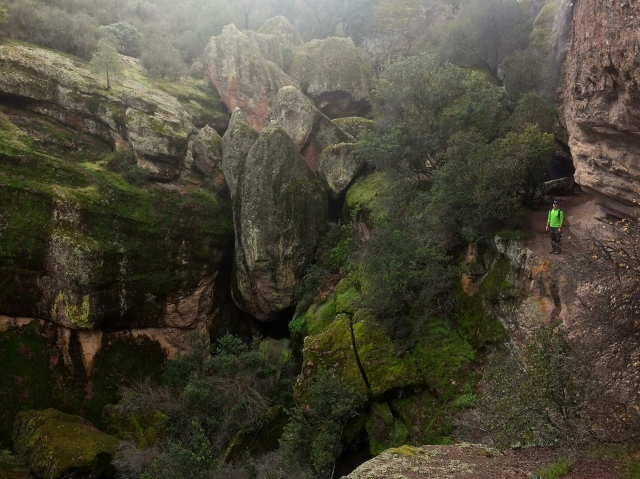 Climbing up a set of stairs to Bear Gulch Reservoir:

Thanks to recent storms, the Bear Gulch Reservoir was full!

Up toward the High Peaks: 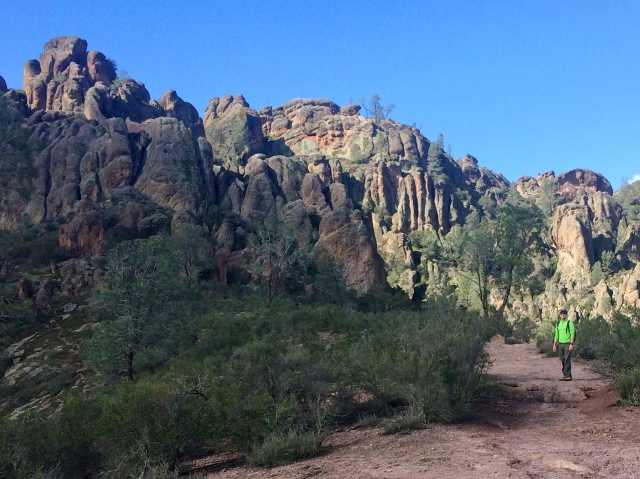 View from High Peaks overlooking the valley below:

Dangerously hot summers typically scorch the rocks, leaving them dry, bare, and brown. With all the winter rain this time of year, the rock formations bore a fuzzy green coat of moss.

As we began our descent, we passed by more outstanding geologic features: 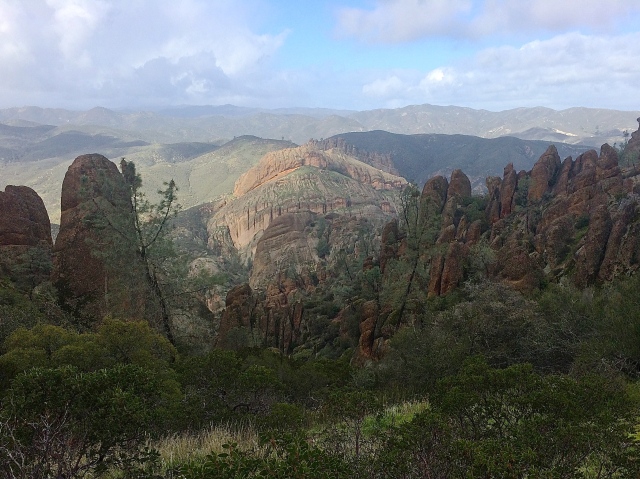 Even though we knew there was a slim chance that the Balconies Cave would be open the next morning, we set out for a quick out-and-back hike to see some trails on the northern side of the park.  After creatively leaping over the gushing creek 7 times, dramatic rock formations came into view.

But alas, the cave was still closed due to floods. 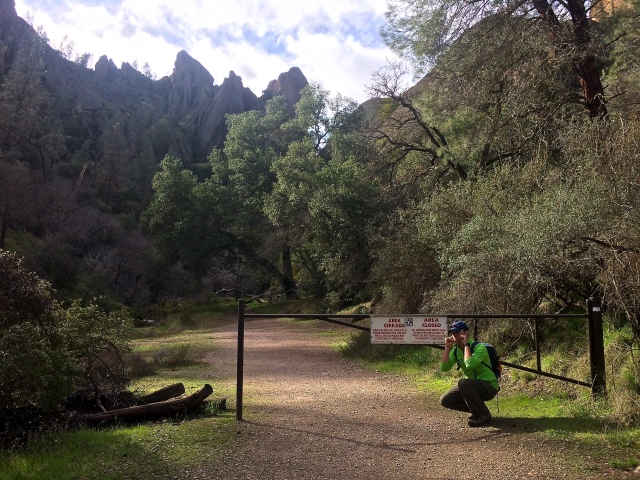 No big deal.  With its vicinity to the Bay Area, there is no doubt that we will be back soon! This new, small national park boasts incredible scenery, pleasant trails for running and hiking, and two talus caves to explore.  Pinnacles National Park–the “local” national park to Silicon Valley!