We fell in love with Barcelona. I mean, how could we not? Beaches. City life. Perfect spring weather. Fantastic eats. Dance music and parties. Hospitable and laid back Spanish culture. And finally, Antonio Gaudi’s psychedelic architecture.

Several motorhome parking lots lied in the heart of the city but due to their hefty price tags of €30/night, we opted for the free motorhome parking lot 9 miles away in Colonia Guell. And unlike the expensive parking lots in the city, the free lot even had free water and dump! Although the nearest metro station (Colonia Guell, a Zone 2 stop) was a stone’s throw from the lot, we opted to walk the extra 10 minutes to the next station (Moli Nou) because it was a Zone 1 station. The shareable T10 metro pass (10 trips on 1 card) was only €9.95 for Zone 1 rides, a deal compared to the €19.95 T10 rides for Zone 2. Although it was a 45-minute to 1-hour commute from Colonial Guell to Barcelona proper, we couldn’t complain due to the free parking and <€1 rides. Plus, the commute made us feel like locals.

Not far from where we parked was Gaudi’s Crypt (€7 per person), one of his incomplete masterpieces. Few tourists venture out of Barcelona to spectate this lovely church/crypt, but those who do are rewarded with the rare serenity nonexistent in other Gaudi structures. Photography was once not allowed but recently that ban has been lifted. Columns resembling spider legs adorn the exterior, and a conch-like ceiling, intricate benches, and chiseled columns splash the interior with surreal beauty. 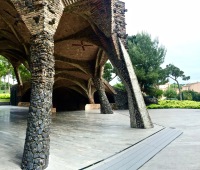 In Barcelona, Gaudi’s work can be seen throughout the city. I begin with two of his hallucinogenic residential buildings, Casa Amatller and Casa Batllo. Due to the high price tags to enter these small residences (a whopping €18 and €22!), we opted to enjoy these buildings from the outside.

Gaudi’s most jaw-dropping and beloved piece, La Sagrada Familia, is still an ongoing masterpiece despite being under construction for over 100 years. Any photo of La Sagrada Familia without scaffolding is ‘shopped! Upon exiting the nearest metro station, one experiences a vertical sensory overload with the back of La Sagrada: 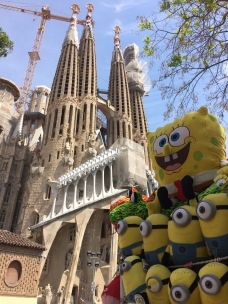 The façade, lit up at night:

To enter La Sagrada Familia costs €18 per person; to walk above between its tall spires is an additional €18, and tickets for the day sell out by morning. It is recommended to purchase tickets online to save time and money! Generally cathedrals throughout Europe look similar (if not the same) inside and out, but La Sagrada Familia is the exception. Nothing can compare to La Sagrada from the outside, but even more so on the inside. Up-close photos of the exterior and interior absolutely do no justice to its mind-blowing beauty. Best of all, because only a certain number of people can enter at any given time, there is never a shoulder-bumping, tourist-shoving experience within the massive cathedral. 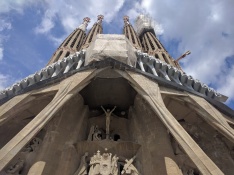 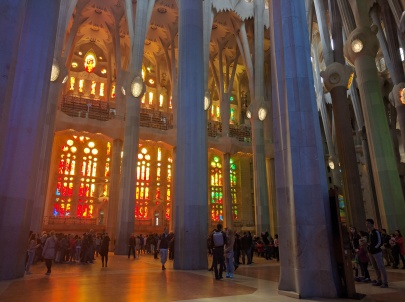 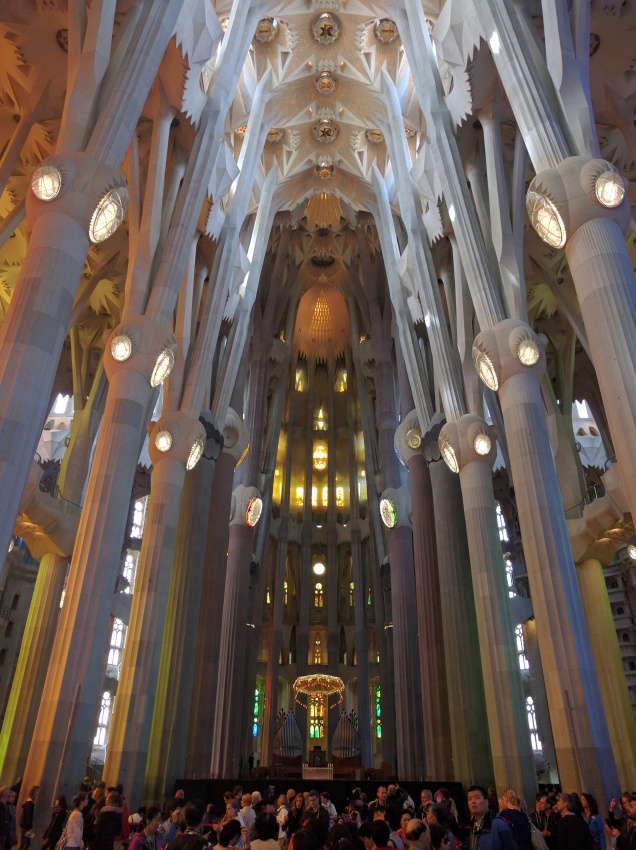 In addition to the majestic cathedral and residential structures, Gaudi’s legacy included Park Guell, a large, outdoor park perched on top of a hill overlooking Barcelona and the Mediterranean. Like La Sagrada, tickets are available online for cheaper (€7 instead of €8) and sell out quickly during the day. Most of the park is actually free; it is only a section of the park that requires a ticket. Although twisty columns and brooding archways could be enjoyed in the free areas, the park’s iconic sites such as the mosaic lizard, benches, and gingerbread-like houses can only be seen upon paying the fee. 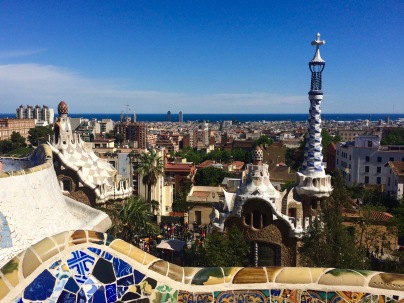 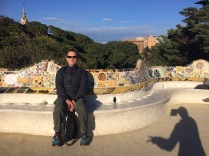 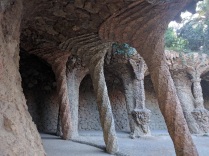 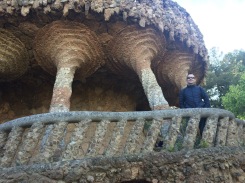 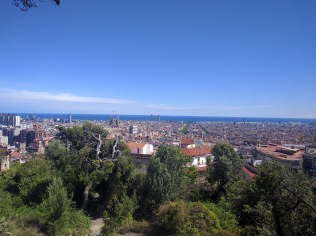 Aside from Gaudi’s masterpieces, Barcelona boasts several landmarks as well including an inactive bullring (bullfighting is banned from Barcelona—yay!) and a unique Arc de Triumph.

Strolling through the Gothic quarter takes one to the Cathedral of Santa Eulalia, the touristy floral street of La Rambla, and the lovely Rambla del Mar.

And as expected, nightlife was legendary. Nightclubs don’t open until midnight, but the party doesn’t really start until 3am. The metro runs 24 hours on Saturday, but because we partied on a Friday night, we caught the first train at 5am.

To satisfy my sweet tooth, we scarfed down The World’s Best Chocolate Cake (from 2005) at Bubo for less than €5, and suis hot chocolate and churros at Catalonia’s oldest creamery, Granja M. Viader. 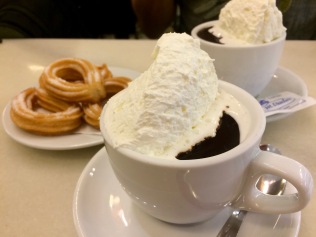 Even though Barcelona is a top European destination with friends back home raving and gushing about the city, we didn’t have any expectations for it.  Whether or not having expectations is key to falling in love with a city, it doesn’t matter with Barcelona.  You can’t help but fall in love with this very beautiful and livable city.