Leaving Cuba and No Fucks Given

Logistics in Cuba always deserve its own story, and so our adventure of simply traveling from Santiago to Havana and departing Cuba gets its own post.

Having already dealt with the nightmarish scenario of purchasing domestic plane tickets from Santiago de Cuba to Havana, all we had to do was return to Santiago from Baracoa by bus for a plane ride out to Havana. Our 5-hour bus ride to Santiago was fortunately non-incidental. Upon our arrival to the Santiago bus terminal we waved down all the $5-$10 rip-off taxis and hopped onto a horse cart for $2 CUP each (8¢) that ran along the Alameda from where it was an easy stroll into town. Experienced, we quickly marched through all the potential scams and extra friendly strangers.

I wanted to figure out the bus + walk to the airport, but a sudden storm caught us off guard and we hopped into a taxi instead for $8. We arrived to Santiago airport in style. 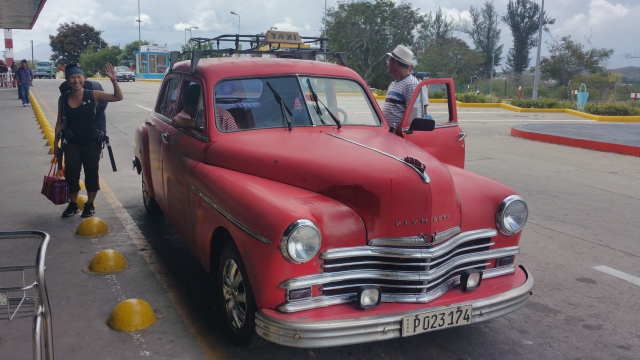 And of course our flight to Havana was delayed, but luckily just by a little over an hour. Although we expected the delay, we did not expect the airline staff to change our itinerary without telling us. We knew our flight number prior to checking in, and when a group of people gathered to board, Chris casually reviewed our boarding passes only to discover our flight number had been changed—and we needed to board pronto! We also weren’t the only passengers who experienced this surprise.  Thanks, Cubana!

After a final two days in Havana we were ready to leave Cuba, and the chain of events upon departure were very much Cuba. Our casa host called a taxi for us, and considering how much a taxi driver profits from the $20 standard fare tourists pay for a trip to the airport, we were surprised the driver never showed up. Fortunately roaming around the streets of Havana for a taxi is never difficult.

Once at the airport I needed to convert all my CUCs back to whatever currency I could because CUCs are completely useless outside of Cuba—the U.S. dollar was ideal, but I didn’t want to pay the 10% penalty. I had to consider which would be better, the euro or the Canadian dollar. It turned out that the only cash the money exchange had at the time was the U.S. dollar, without the 10% penalty! This worked out in my favor because I am American, but I couldn’t help but laugh at all the confused Europeans and Australians receiving U.S. dollars that they would have to change later. Why they only had U.S. dollars, I do not know, considering how Americans are the least likely tourists to travel to Cuba. Cubans don’t even like the U.S. dollar.

Like our domestic flight, our international flight out of Cuba was delayed. However unlike the domestic flight, no announcement had been made. Boarding never happened, and the flight number and information simply disappeared off the information screen. Chris walked around to inquire, and no one seemed to know what was going on. Finally one guy told me that he found a girl who found an airline staff member with the answer—the airline knew the flight was delayed but they did not announce it because they did not want to deal with their customers’ questions, frustration, and anger. They basically chose to ignore the problem because they did not want to deal with it. Classy. About 1.5 hours after the plane was scheduled to take off, the gate all of a sudden opened and a staff member appeared to collect tickets. There was not even an announcement to begin boarding; everyone literally just jumped from their seats and bombarded the door. Lovely. We were happy to take off and see the country disappear behind us.

More than once during our 20 days in Cuba we had moments where we couldn’t wait to get the fuck out. And now that I am out with time to reflect, my best analogy for Cuba is like an endurance event, such as a marathon or triathlon. Originally it sounds like a great idea. You sign up for it, you broadcast it to your friends and family, and everyone is excited for you. But then when you’re doing it, it sucks. You wonder why you were stupid to have signed up to begin with, and you ask yourself what the fuck were you thinking?! And when it’s over, when you’re long done, when you take the time to reflect, you tell yourself, hey that wasn’t so bad, and I’d like to do that again. That’s why I can say I wouldn’t mind going back.

This entry was posted in Cuba. Bookmark the permalink.