The Greeks once considered Delphi, which took on its religious significance around 800 B.C, to be the center of the world.  It held the seat of the Oracle, whose decisions and predictions for individuals as well as the state significantly impacted ancient classical Greece.  Ancient Delphi was dedicated to the deity Apollo, the Delphic games (forerunner to the modern day Olympic Games), and the Oracle.  Delphi fell into ruins after multiple raids, a destructive earthquake, and much later, the rise of Christianity. Decline in the population continued to fall, resulting in complete abandonment in the 6th or 7th centuries. To see Ancient Delphi meant laying eyes on a once-flourishing region that influenced and played out the history of Greece.

In order to explore Delphi, we camped at the wonderful Camping Apollon for €20.50/night for 2 people with electricity.  Not only did it include free showers, it also included a swimming pool (a savior for the 35°C temperatures) and incredible pitches overlooking the Peloponnese Peninsula and the Gulf of Corinth.  From the campground it was only a 15-minute walk to the town of Delphi, and a 25-minute walk to the Ancient Delphi ruins.

When we walked through town, we quickly noticed how mellow the atmosphere was, and even more-so at the ruins.  Even with its monumental structures, incredible museum, and great history, Ancient Delphi was overall not too crowded and a wonderful site to visit.  The €12 entry fee included access to all of Ancient Delphi, the Temple of Apollo, the museum housing all artifacts discovered in the ruins, and numerous refrigerated water fountains.  We scoped out the ruins in the morning when the heat was manageable, and saved the indoor, air-conditioned museum for the hottest time of day.  Although mostly reconstructed, I detail out the most iconic structures below.

Treasuries throughout Ancient Greece, which housed gifts and offerings to the gods, were built to celebrate victories and to thank the Oracle for her advice.  Most notable of treasuries in Ancient Delphi was the reconstructed Treasury of Athens, built to commemorate the victory at the Battle of Marathon: 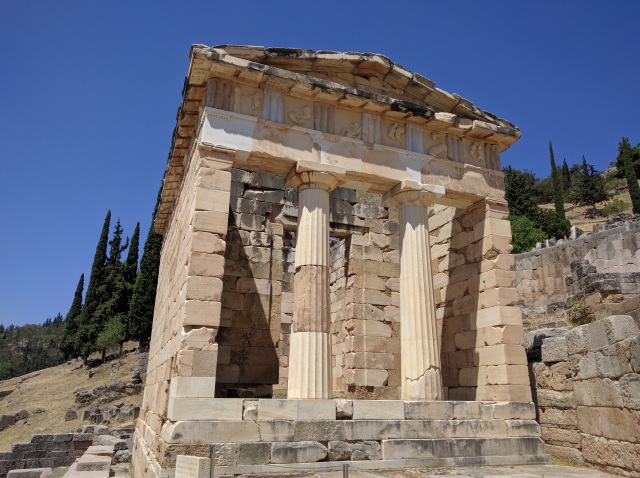 The remains of the Temple of Apollo, which was rebuilt and destroyed multiple times by earthquake and man, was a massive site within the complex.  Its final destruction, along with its art and statues, was carried out by a Roman emperor in the name of Christianity…in other words, Christian terrorism.

The theater, with seats for 5,000 spectators, overlooking the valley below:

The stadium, with a capacity of 6,500 spectators, where the Delphic games were held:

People typically save the best for last: the circular Tholos, just a few minutes’ walk from Ancient Delphi.  It once stood with 20 columns; 3 of the columns have been restored, making it a favorite to photograph. 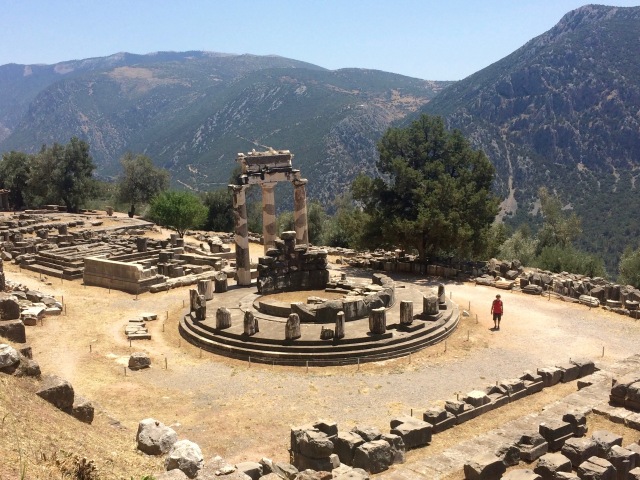 Of the three archeological complexes we visited in Greece, Delphi was my favorite in terms of monumental sites, history, and crowds.  It seems as if most people come to Ancient Delphi as a day trip from Athens, but the 3-hour one-way bus ride sounds exhausting and rushed to me.  We enjoyed spending two nights in Delphi to take in the incredible views from the slopes of Mount Parnassus, to experience a more laid-back town in Greece, and obviously to observe the ruins and imagine it as it once was–the most influential sanctuary for ancient Greece.

This entry was posted in Greece. Bookmark the permalink.