Silly me, I thought the Black Sea would be, you know, black.  Clearly, it’s not.  Its waters are crystal clear and warm, with low salinity to boot!

I knew the Black Sea coast wouldn’t even compare to the glittering Mediterranean coast, but I couldn’t travel through Bulgaria without experiencing the locals’ favorite summer destination.  After all, a part of why I travel is to see how other people live.

I read that the north coast was littered with uncreative beach resorts that offered little to the independent traveller, while on the other hand the southern coast was more beautiful.  Well, that made our destination easy to pick: Sozopol and Nessebar!

Who knew that the long drive between Plovdiv and Sozopol would boast hundreds of kilometers of sunflowers?  We had never seen such an endless landscape of sunflowers; the flat, rural landscape glowed with bright yellow.

Our first quick destination outside of Sozopol was the kitschy Ravadinovo Castle. Construction on this dramatic castle began in 1996 and still hasn’t been completed!  While its exterior was dramatic, the interior was still off-limits to visitors.  Due to its lack of historical significance and its clear aim of being a “Disney”-like tourist attraction, we didn’t bother paying the 10 lev  each ($5.65) and enjoyed it from the exterior instead.

After our brief castle visit we continued to Sozopol.  Fortunately it was a Friday afternoon and there was still plenty of free parking in the lot across from the Santa Marina Holiday Village, just 1.5 km from the heart of Sozopol.  In town, we walked along the beach and the old city walls:

It’s worth grabbing a drink and snack along one of the numerous restaurants with a sea view.  Prices aren’t too crazy by European beach resort standards (19 lev or $10.75 for a beer, a pot of tea, and a slice of cake).

But better yet, instead of eating dinner at the “pricier” restaurants above the old city walls, we walked over to Sozopol’s larger beach away from the old city walls and dined at Veranda, a slightly hidden restaurant that didn’t employ people to hustle diners to come in.  It even had a gorgeous sea view.  We loved both our pasta dishes (my seafood pasta had an abundance of mussels!), and both plates were between $5-$7!  Delicious food, great service, beach view, incredible prices.  Thanks Bulgaria.

Unfortunately finding a beach to wild camp near Sozopol was near impossible; the coastal stretch of the Black Sea is relatively short compared to the size of the whole country, making every patch of sand a popular, busy beach.  Croatia and Greece had spoiled us with its remote coastline and wild camp-worthy villages.  Not so much in Bulgaria.  We found a relatively quiet beach lot in the evening in the nearby town of Chernomorets, but for the first time in 5 months of road tripping, we awoke to the abrasive knocking on our windows at 7am, signaling our time to go.  Oh well.

Next stop: Nessebar, a historic and resort town with a medieval “city” that spans over 3,000 years.  Its surplus of historic buildings within such a tiny peninsula has given it a somewhat negative spotlight–it was the first town I visited in Bulgaria that had been clearly overrun with tourism and too many shops selling the same souvenir junk.  We were lucky to find street parking outside of the old city on residential streets; anywhere nearer would have been a nightmare.  I can’t say that Nessebar is worth making a long haul for, but we were in the area so it didn’t hurt to drop by. 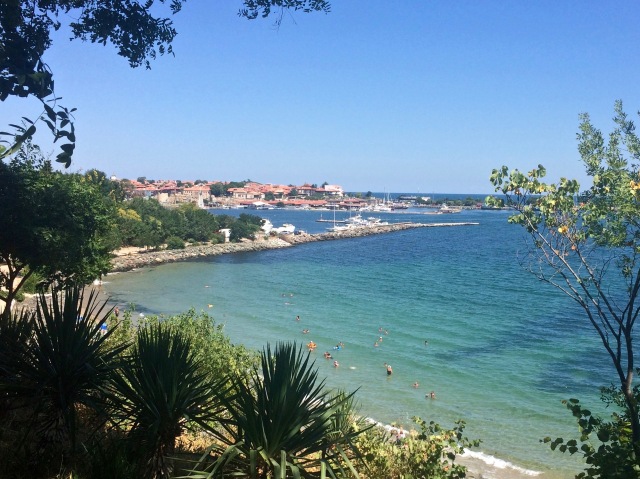 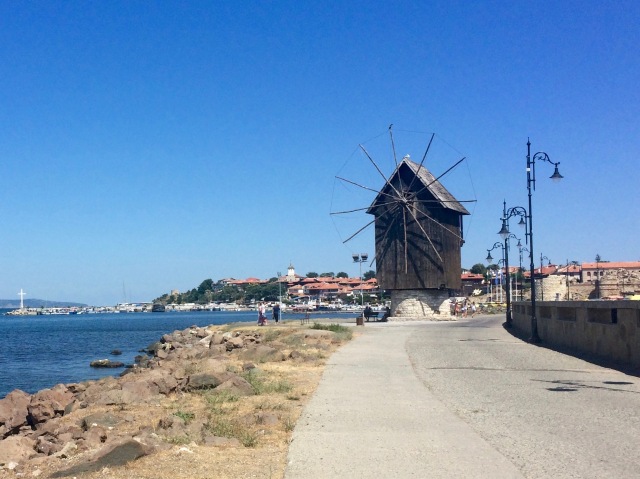 There were about 7 historic ruins, none of which we entered because there was a small fee for each of them. 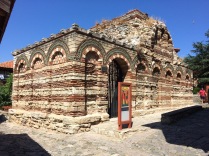 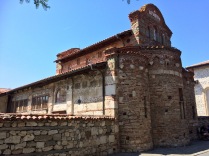 We didn’t have to stay very long before we got tired of the crowds, hopped back in our motorhome, and headed west.  I realized then and there that we had reached the most easternmost point in our trip–the Black Sea coast.  It was only westward from then on.

This entry was posted in Bulgaria and tagged nessebar, sozopol. Bookmark the permalink.

2 Responses to The Black Sea