Full day tours of Nairobi cost about $100, with the highlights being the David Sheldrick Elephant Orphanage and the Giraffe Center. However, visiting both places independently will cost less than $20 and requires only a half day. Traveling by bus in Kenya is incredibly cheap and easy!

The elephant orphanage is only open to the general public from 11am-12pm on a daily basis.  During this hour, visitors can spectate the endearing site of bottle-feeding and mud-bathing elephants and listen to a quick introduction to the orphanage’s family of elephants.  Many elephants are rescue elephants and are later reintroduced back into the wild–yay!

From the heart of Nairobi I walked toward the central train station in search for the buses and matatus.  Sure enough, at the roundabout of Haile Sellassie Avenue and Moi Avenue, I became overwhelmed with the plethora of unmarked buses, clouds of pollution, uncontrollable traffic, and noisy touts. Luckily Kenyans are extremely helpful and as soon as I told the first tout I wanted to go to the elephant orphanage on Magadi Road, he stopped ushering people into his van and walked me over to the right van. “Elephant orphanage? Magadi Road?” I asked the new tout. He nodded, I hopped into the packed van, and we immediately set off.  The cost? Only 30 shillings, or 30¢.

Twenty to thirty minutes later I hopped off at the entrance to the elephant orphanage along Magadi Road. It would have taken maybe 15 minutes to walk the 1 km or so to the orphanage, but within the first minute of hopping off the van, a sedan appeared and stopped in front of me.  Peering in, I saw a solo female traveler with a private driver.  She had hired an Uber from Nairobi. “Mind if I hop in?” I asked. She happily told me to come in. Saved me 10-15 minutes! I noticed that between 10:30am-10:45am, car after car headed for the elephant orphanage; I assume hitching a ride from the main road at this time wouldn’t be difficult. To my luck, she had also planned on visiting the giraffe center after the elephant orphanage, so we quickly became friends and continued our day together.

At exactly 11, the doors opened to the public. It cost 500 shillings for non-residents. For the next hour, visitors (mostly non-residents) oohed, aahed, awwed, and photographed the adorable elephants.  They eagerly trotted out for feeding time, slipped and slid in the mud, played with each other, and splashed in the giant pools of muddy water. 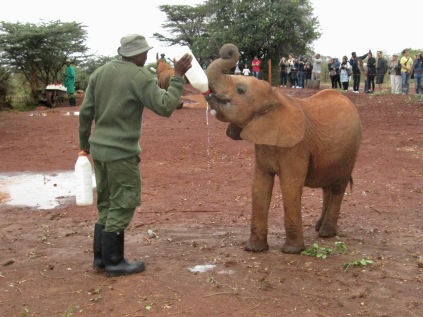 After 12 we set out for the giraffe center. We walked to Magadi Road, crossed the street, and waited for a bus or van. In less than a minute, a van pulled over to the side of the road and a tout beckoned us to enter. “Galleria?” I asked.  He nodded. We hopped in and each paid 50 shillings. The plan was to ride to Galleria Mall, hop off, and transfer to another bus to Hardy.  From Hardy we’d walk the 1.5 km or so to the giraffe center.  And we did just that.  Vans awaited us at Galleria, and we each paid 30 shillings for the ride to Hardy.

It took about 20 minutes to walk to the giraffe center, and we each paid the 1,000 shilling admission fee (~$10). Unlike the elephant orphanage, the giraffe center is open to the public everyday from 9am-5pm.  There is a small cafe, gift shop, and modest museum showcasing the variety of giraffes in Africa.  We quickly learned that the giraffes at this particular center are the Rothschild’s giraffe, the most endangered of giraffe species.  The center is actually a breeding center to increase the Rothschild population! Best of all? Visitor interaction with the giraffes! Visitors can simply observe the gorgeous creatures from up close or afar, feed them, and even kiss them! 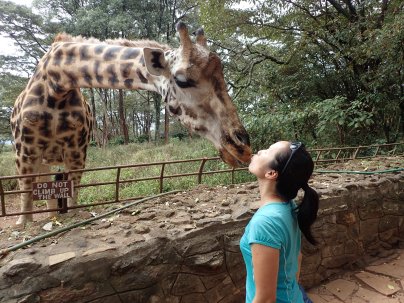 Once our hearts were filled with content, we walked the giraffe center’s nature trail, but it was nothing to rave about. It took another 20 minutes to return to Hardy, and from there I asked a local woman how to return to Nairobi. She pointed at a parked bus and said, “City bus.” We made our way to the bus, paid 80 shillings (I think we were ripped off…but whatever), and arrived back into the heart of Nairobi within 30 minutes.