Contrary to many people may think, I lack cultural and geographical knowledge of most parts of the world.  “You’ve never heard of Bordeaux?” Chris asked me.  Nope.  Perhaps that was why I enjoyed Bordeaux and its surroundings.

Unlike Paris, this large city did not reek of tourists and ridiculously long lines. Instead it was simply a beautiful and enjoyable city that had all the pleasures of France: quaint cobblestone streets, lovely bakeries and patisseries, and well-preserved architecture.  In addition there were an abundance of young adults from the University of Bordeaux (one of the largest campuses in Europe), and no end to fancy restaurants as a result of the surrounding wine country.  Bordeaux also happens to be the world’s wine producing capital, as winemaking in the region began in the 8th century.

Before arriving to Bordeaux, we drove through miles and miles of spring vineyards to St. Emilion, one of the favorite villages in the area.

A quaint, medieval town framed by vineyards, the little picturesque St. Emilion was the perfect postcard.  Numerous chateaus and estates dotted the roads around St. Emilion, but instead of wine tasting, we simply enjoyed a stroll through town and lunch at a cafe. Spring meant the vines had not yet burst with green leaves, but the blue skies and blooming flowers more than made up for the naked branches. 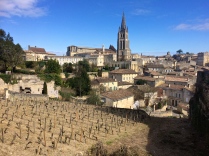 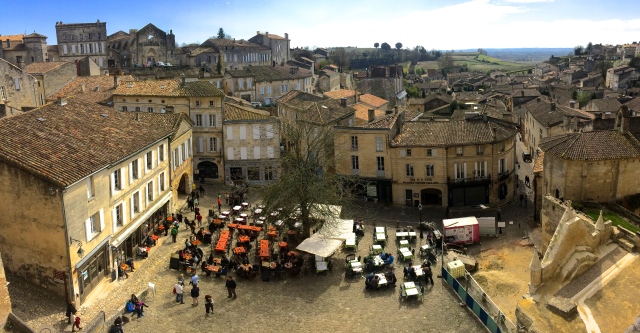 Later that afternoon we roamed the streets of Bordeaux.  Like the locals, we lounged at the endless parks along the Garonne River.

College students lounging in parks within the city was a common site. 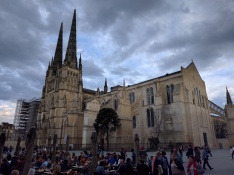 There was no better way to end the day than with a French dinner of steak frites, fois gras, and red wine on a bustling cobblestone street, because how else would you end a day in French wine country?

This entry was posted in France. Bookmark the permalink.