Romania’s shining star is Transylvania, making it unnecessary to spend too much time in Bucharest. When I told a couple of Romanians we were entering Romania by way of Bucharest, one man smiled and responded, “Don’t spend too much time there.” We didn’t plan on to anyway.

Like Sofia, Bucharest is a massive, sprawling, and thriving city bursting with malls, restaurants, cafes, bars, and numerous architecturally beautiful buildings. I even managed to stumble upon a Vietnamese fast food joint in the food court of Promenada Mall. I never imagined I’d find a Vietnamese restaurant in any European mall, never mind in Romania!

Unlike Sofia, Bucharest lacks any iconic monument or site. Sure, Bucharest is home to the Palace of the Parliament, the second largest government building after the Pentagon, but its vast size doesn’t necessarily mean a breathtaking site.

We even attempted to tour the Palace of the Parliament. Like a good tourist, I visited their website for information and rules. Tours commence 9am to 5pm daily from spring to autumn, and tourists are required to bring a national identity card or passport. Even the fee was quite steep—35 lei ($8.65) per person and an additional 30 lei ($7.40) for a camera fee—but I thought it’d be worth it. In order to avoid long queues, we showed up exactly at 9am with our national identity cards: our California driver’s licenses.

“Oh, but these are our national identity cards in the U.S.”

“That is how it is in Romania.”

What, that websites in Romania are poorly written? I thought. “Oh, so the website means to say a Romanian national identity card or passport. That’s okay. At least we saved $25!”

Our feelings weren’t hurt. I was happy to save $25.

Other than the Palace of the Parliament, a handful of beautiful and historical buildings lined the streets, particularly Victory Street.

The Stavropoleos Monastery and courtyard: 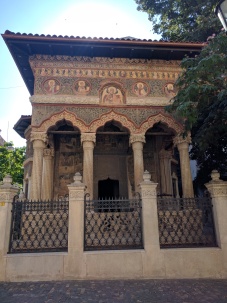 The CEC Palace, originally built for the headquarters of Romania’s oldest bank:

The Palace of the National Military Circle:

The Memorial of Rebirth, a striking tribute to the lost lives of those who opposed the communist regime in December 1989:

The Central University Library of Bucharest and a statue of King Carol I:

My favorite building was the Cantacuzino Palace (a residence built in 1903 for the mayor and former prime minister of Bucharest), now the George Enescu National Museum. 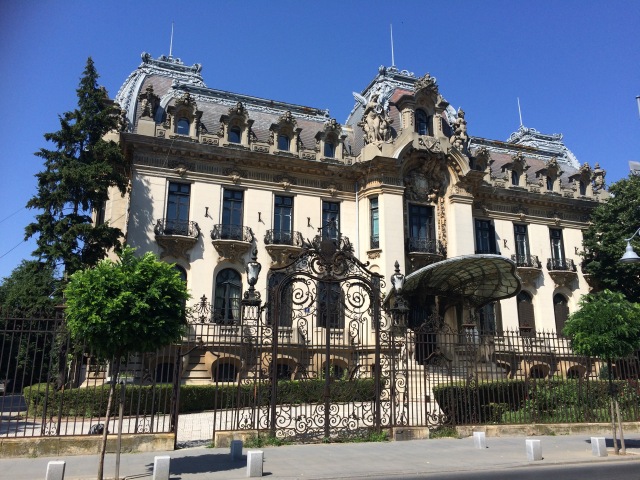 After passing time at a café, sauntering the streets, and spectating the buildings, we left Bucharest for the highlight of Romania: beautiful Transylvania.

This entry was posted in Romania. Bookmark the permalink.