Brasov, arguably Romania’s most visited city, isn’t too far from Bucharest, making the drive to Brasov and the surrounding area an easy trip. Excitement had already filled me upon reading about Transylvania, but no amount of research could have prepared me for the insurmountable beauty and charm that would embrace me for the next couple of days.

Our first stop was Peles Castle in the small town of Sinaia; I had read reviews that visiting this castle would be more favorable than visiting the touristy, famous Bran Castle (aka Dracula’s Castle). Plenty of free parking lined the streets, and it was a pleasant 1 km walk up a short hill to the postcard perfect site of Peles Castle. We planned on strolling around the castle because I knew that was free (as opposed to paying to enter the castle), but because it was a Monday, the castle was closed and devoid of tour groups which made it the perfect, peaceful visit to a castle.

Down the path from Peles Castle is the smaller Pelisor Castle. Pelisor resembled a mansion more than a castle.

Next up was Bran, the tiny town home to the famous Bran Castle. Funny how a castle and region can become world famous as a result of a fictional novel—Bram Stoker dubbed a Transylvanian castle to be the home of Dracula and for whatever reason the Bran Castle earned that title. Vlad the Impaler (son of Vlad II Dracul who was a member of the Order of the Dragon to protect Christianity in Romania from the Ottomans) may have spent one night at the Bran Castle, but even then he had nothing to do with vampirism or Dracula other than possessing a horrifically famous reputation that Stoker happened to find intriguing.  Now the world is forever tainted with the idea of vampires living in Transylvania, particularly within the Bran Castle. Thanks, Stoker. You’ve turned a historic fortress into a themed castle and its surrounding town into a tacky tourist magnet.

Anyway we checked into the only campground in Bran, Vampire Camping (I shake my head in disgust at the name), and waited until later in the day for crowds to dissipate before heading to Bran Castle. My plan was to stroll around the castle after it closed, just as I did at Peles Castle. As soon as I approached the town at the foot of the castle, I witnessed all the vampire-themed junk shops and restaurants and paid parking lots. Fortunately all tour groups had gone for the day and all the shops were getting ready to close.

Unlike the Peles Castle, it turned out that tourists couldn’t simply walk around the Bran Castle.  The entire castle and massive garden was enclosed by a fence, and to enter the castle grounds cost 35 lei ($9).  “Those are the rules,” an annoyed Romanian security guard told me.  35 lei to be squashed by ignorant tourists inside a theme castle? No thanks.  Here is the best view you can get from the gate:

Before heading into Bran, I figured it wouldn’t hurt to add a little hike within the Carpathian Mountains.  We opted to hike in Piatra Craiului National Park based on a recommendation from a local, and that is how we ended up in the tiny town of Zarnesti.

We unfortunately did not have enough time to summit the peaks of Piatra Craiului; we made it to the Curmatura Refuge in under 2 hours and we befriended a giant dog. 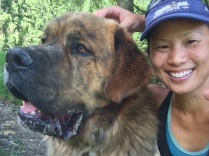 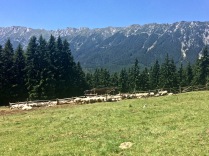 After our hike we hit the road again, drove past Rasov and the Rasov Fortress, and finally made it to the walled Old Town of Brasov.  Despite all the signs stating “No Parking Except Coaches,” we parked on the road at the foot of Mount Tampa without any issues.  We even parked there overnight!

Immediately upon parking, we were granted gorgeous views from the street that lead us to the main square:

Buildings from the Old Town with the Brasov sign displayed on Mount Tampa:

We enjoyed spectating Brasov from the White and Black Towers, just a short walk up a hill from the town center.

The Black Tower and its view: 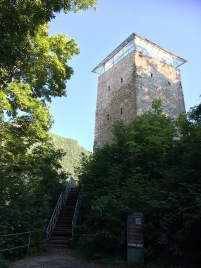 The White Tower and its view:

I can’t explain why I found Brasov’s main square to be charmingly breathtaking.  At this point in our trip we’ve seen too many main squares in cities and towns, all which were too highly reviewed by overenthusiastic tourists.  With the combination of the lovely architecture, adorable pastel colors, pretty fountains, airy space, lack of tourists and touts, extremely affordable eateries, and perfect summer weather, it would have been impossible to have a quick glance and move on from the square.

We almost always avoid grabbing a bite to eat at overrated, overpriced eateries on any main square in Europe.  However, it was different in Brasov.  We enjoyed a delicious dinner right off the square for ~€20, and the next morning we chowed down on an eggs benedict breakfast with a pot of tea for me, two coffees for Chris, and splendid views for ~€12. 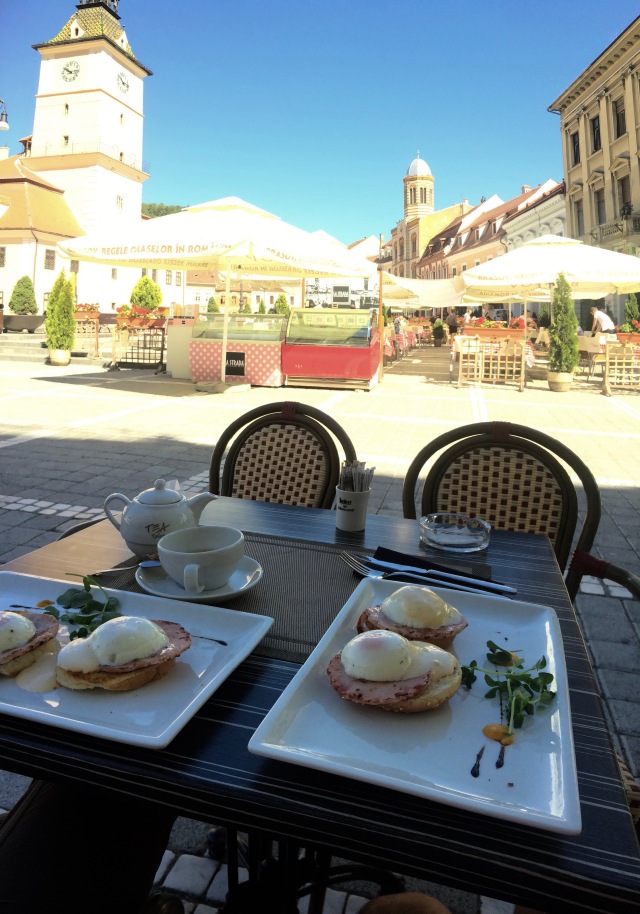 Who would have known that Transylvania, Eastern Europe, could be so charming? I certainly did not.  Transylvania has given me an everlasting impression of Romania; I thought Portugal and Slovenia were underrated, amazing countries and now I’m adding Romania to that list.  Kind people, incredible prices, and few tourists were icing on the cake.

1 Response to Brasov and Around