After 2 months in modern Chile and Argentina, I was excited for some culture (despite the long and unnecessarily tedious visa process for Americans).  Research on Bolivia made me assume there were similarities to Southeast Asia with regard to street food, lifestyle, and cost of living…excluding the high altitude. Prior to arriving I knew La Paz was the highest metropolis and administrative capital in the world at ~3,650 meters; however, I had no knowledge that it was a bowl-shaped supercity with sharp, rugged mountains in its surroundings. With its rolling hills in every turn plus the extreme altitude, it made walking in San Francisco seem like a simple stroll through the park.

Contrary to what we are used to in the States, the rich live at lower altitudes whereas the poor live further up the hills.  The lower altitudes are preferable not just because of its vicinity to the city center, but also because of the more moderate climate.  At the top of the bowl is the giant suburb of El Alto, and its views down into La Paz are literally and figuratively breathtaking.  I had never seen such an incredible city until I saw La Paz from El Alto–imagine millions of homes sprawling out from the bottom center of the bowl, crawling up the sides of the valley and engulfed by rugged mountain terrain.  You’ll see the photos in this post from various viewpoints.

During our brief visit to La Paz we enjoyed people watching, strolling through eclectic markets, climbing up to miradors, and making a side-trip to Yungas Road, the “most dangerous road” in the world.

The church of San Francisco: 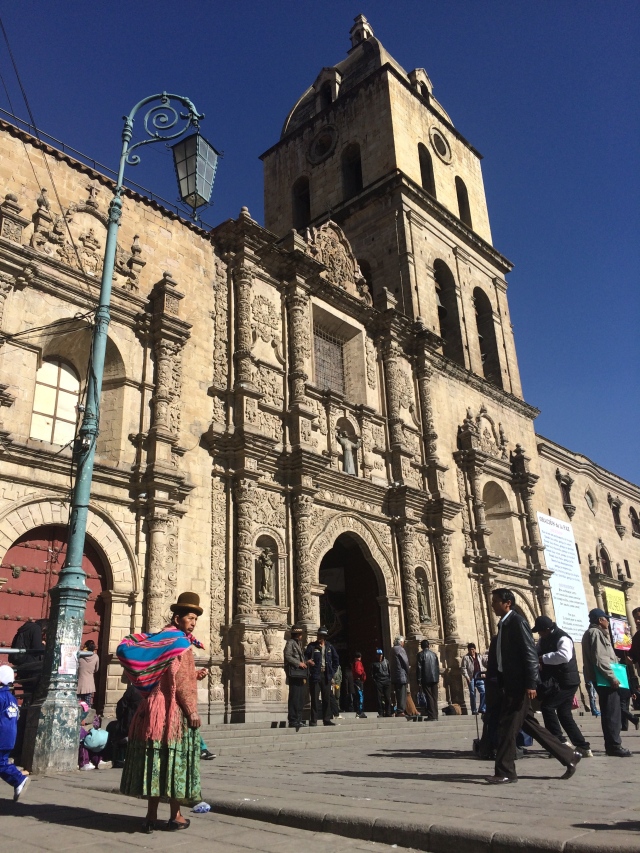 A typical bus in La Paz rolling downhill on a cobblestone street, with clusters of power lines suspended above:

In almost every street (like pictured above), there are views of the mountains in the distance, completely covered with homes. 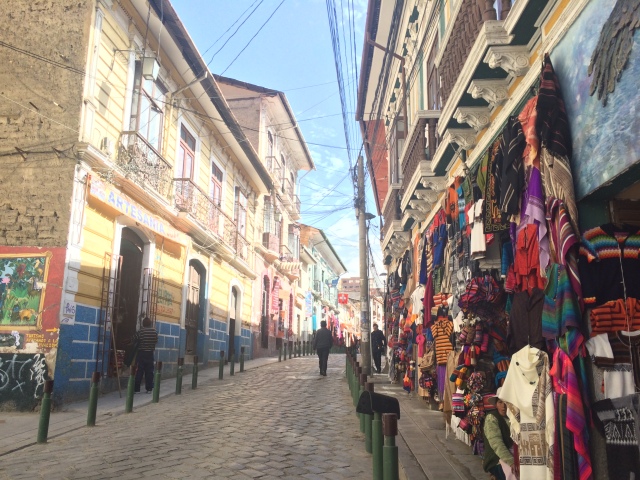 The Witch’s Market is not only filled with trinkets, souvenirs, and artesenal crafts.  One can easily find cocoa leaves, herbs, dried llama fetuses, and dead baby llamas.  Apparently some believe that the burial of a llama fetus beneath one’s home will bring good luck.

Laikakota Park has an entrance fee of 3.5 bolivianos (bobs), ~50¢.  This park is basically a large playground with incredible viewpoints. Amusingly enough the best viewpoint was from a giant slide. Whee! 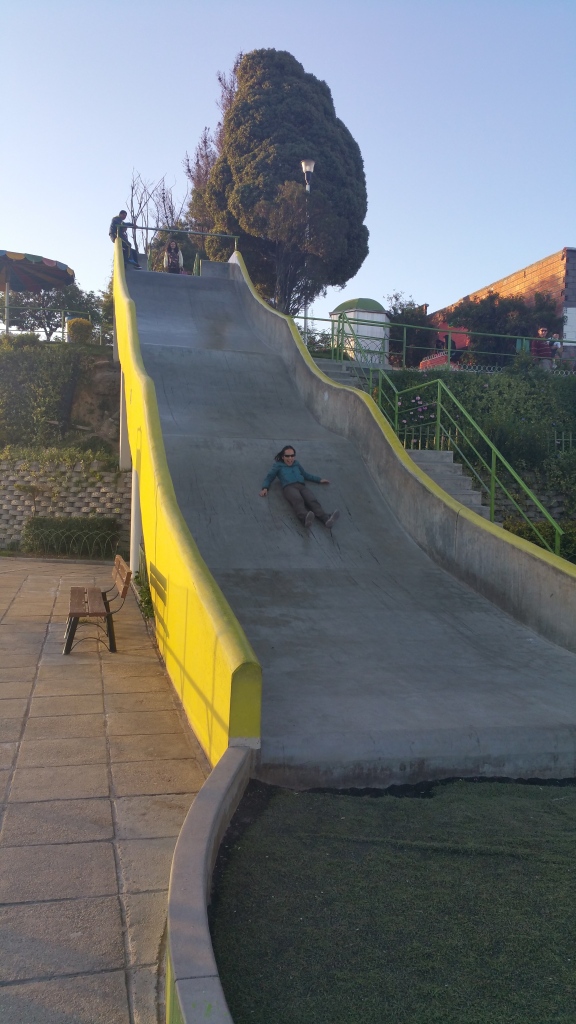 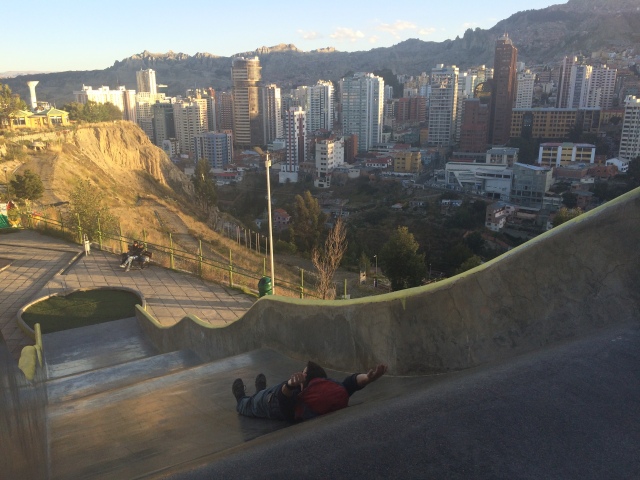 We fortunately happened to be in La Paz on a Thursday.  On Thursdays and Sundays, one of the largest markets in the world takes place above La Paz in El Alto. And better yet, we were able to take one of their newest forms of transportation: the cable car. 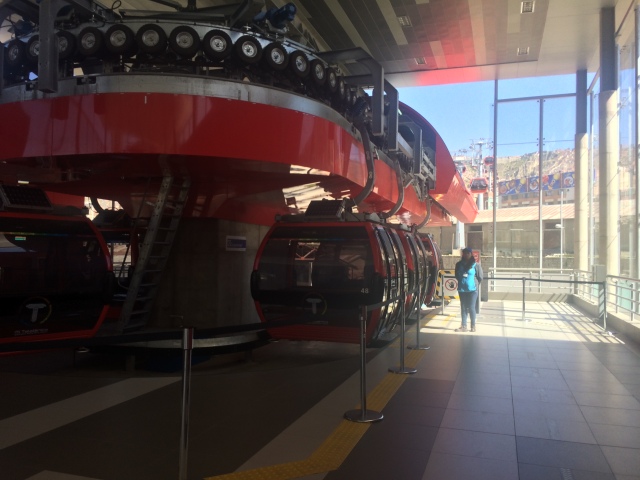 Transportation is a nightmare in La Paz.  There is literally no public transportation for the metropolis of over 2 million people.  All forms of shared transportation are private. Thankfully in 2014, the construction of a modern cable car was completed.  Now instead of enduring a 30-minute minibus ride to the top of El Alto, one can travel from La Paz to El Alto within minutes all for only 6 bobs (~85¢) roundtrip.  And not only is it efficient and inexpensive, the views are spectacular.  It’s incredible that this cable car is one form of commuting. 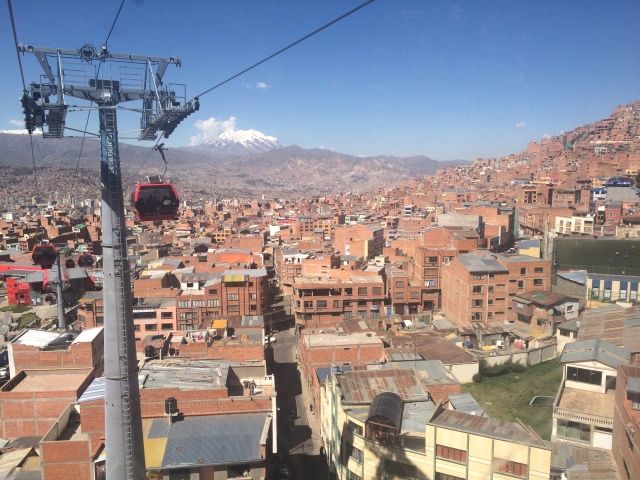 The Thursday market was full of life, energy, people, and practically anything you can think of for sale.  From produce, to lotion, to clothes, to shoes, to kitchenware, to stolen car parts, the market has it all.

La Paz as seen from the El Alto market. 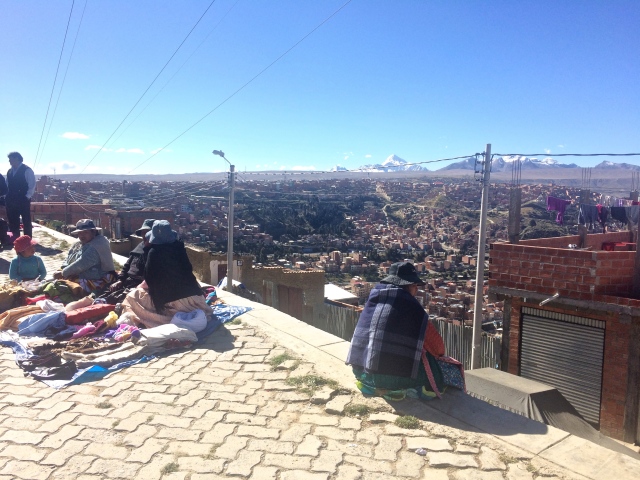 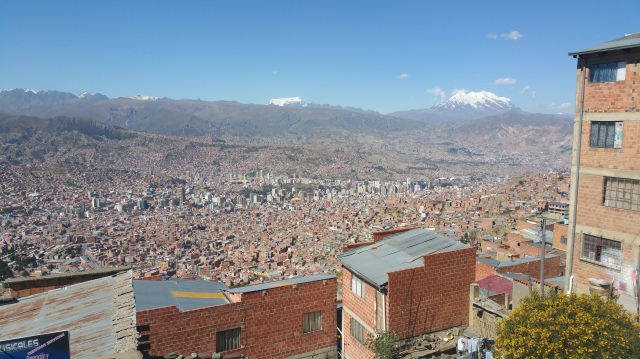 My favorite thing about local markets is the street food.  We had no idea what this fried potato thing was, but we wanted to try it. It only 4.5 bobs (~65¢) and amazingly delicious. 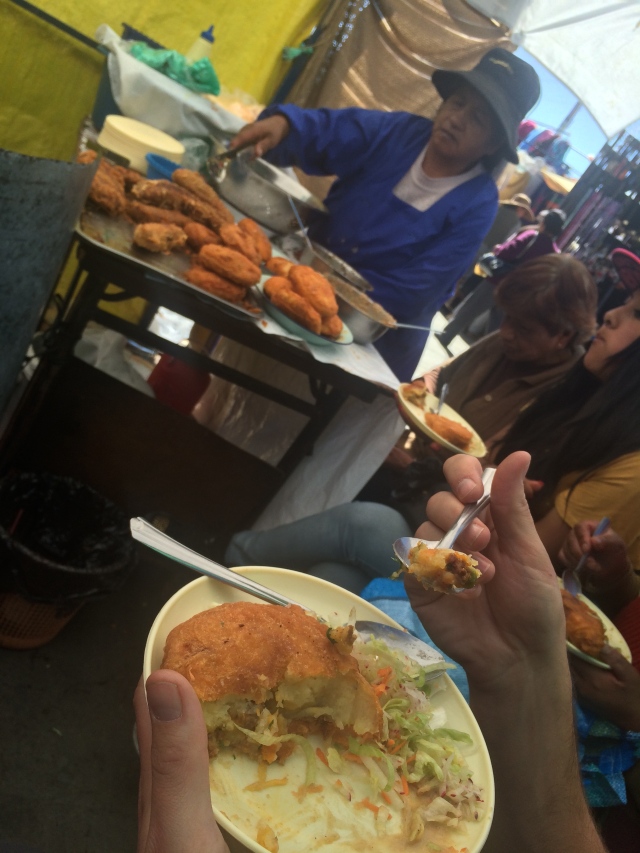 With our hearts content and bellies full, we spent our final afternoon and evening in La Paz at the best viewpoint: Killi Killi Mirador.  The 360º views and the looming shadow over the city at sunset could not be beat. 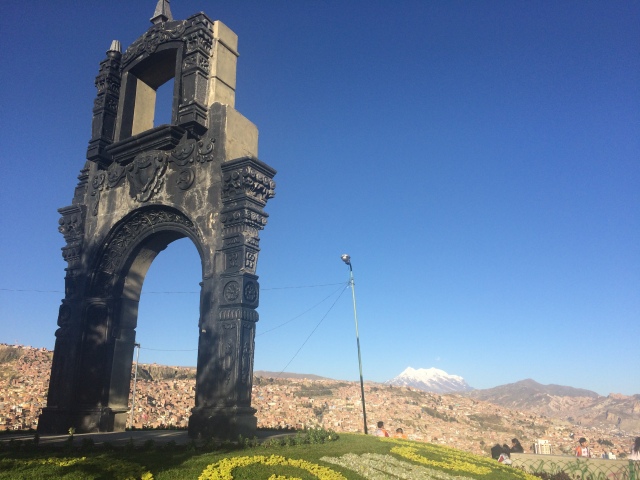 Sadly in the States, I’ve always heard of Rio de Janeiro, Buenos Aires, and Santiago.  No one ever really speaks of La Paz.  Is it because the typical American prefers not to wander out of his comfort zone?  Do they prefer the comforts of modern society instead of indigenous culture? La Paz is so little known and talked about…perhaps because Bolivia is one of the least-visited South American countries. Truthfully I hadn’t even considered visiting Bolivia until a month into our trip, and after gazing in awe at its gorgeous landscape and breathtaking cityscape, I am so glad I made it to Bolivia.

This entry was posted in Bolivia. Bookmark the permalink.