Perhaps I should have done further research, but I’d like to thank Myanmar for screwing us before we even got there! Even the government site did not clearly state a letter of approval was required for a tourist vista. In addition to that, I unfortunately read Lonely Planet’s bit on Myanmar’s visa-on-arrival a bit too quickly and overlooked the outdated post of 4 years. Apparently Myanmar’s definition of visa-on-arrival means your pre-approved visa commences when you arrive!

The words, “Holy fuck,” crossed our minds during our attempt to transfer from Chiang Mai to Yangon at the fly-through area in Bangkok when an AirAsia staff member asked us for our Myanmar visas.

“You can do visa-on-arrival,” both Chris and I told the AirAsia staff. “We read that online.”

Chris and I immediately pulled out our smart phones and frantically looked up the visa-on-arrival procedures for Myanmar. Quick searches proved us wrong, with recent posts from TripAdvisor and even a quote from TravelFish: “As of the date of posting (March 15, 2014), the visa-on-arrival for tourists program has been suspended so getting a visa before departure is required.” D’oh!

For the next three hours, we anxiously waited for AirAsia to sort out the logistics and undo our departure stamp, which was given to us in Chiang Mai. Although technically our fault, both Chris and a Bangkok AirAsia staff member agreed that the AirAsia staff in Chiang Mai should have checked our visa information prior to immigration departure. Fortunately our Thailand visas were still valid for another week, and like all Southeast Asian companies AirAsia was overstaffed so getting help was not an issue. During this time I thought about how fortunate we were for getting stuck in Bangkok instead of, let’s say, Scambodia!

Eventually we got our departure stamp canceled. This will definitely provide an amusing story in the future.

After we received the fat, red CANCELLED stamp, we retrieved our bags which were thankfully pulled off the plane en route to Yangon. The next step was rebooking our flight to Yangon. Our three hour wait allowed me to research Myanmar visa-on-arrival procedures and luckily the easiest way to get the visa is in Bangkok at the Myanmar Embassy! Same-day service is offered for only 1260 baht (~$39 USD) as long as you can provide a reason why the visa must be expedited, such as official boarding passes/documents that show a last-minute departure. Screenshots on smartphones won’t work. With that information, we decided to get our visas the next day and then fly to Yangon after that. The AirAsia sales representative was nice and told us that only her manager could make the booking and we would receive our updated itinerary later that day. Deep down in my gut, I wanted to confirm the booking before leaving the airport, but both Chris and I were tired and wanted to be done with it. We regrettably trusted her and left…

We left DMK at the peak of rush hour (4:50pm). Since we were already familiar with Bangkok, we took a taxi to the Mo Chit BTS and then took the BTS to Surasak, the station literally down the street from the Myanmar Embassy and also the station where our previous hotel was located. After checking into an excellent budget hotel across the street from the BTS (King Garden Royal Inn), we eagerly made our way back to Sukhumvit Soi 38 to enjoy our favorite dinner in Bangkok: wonton soup followed by Bangkok’s best mango sticky rice!

Of course we never received an updated itinerary with boarding passes from AirAsia, which was a requirement for same-day service. So what did an artist/designer do? I photoshopped our boarding passes and looked forward to bringing altered documents to the embassy.

The next morning we gathered our documents and successfully sorted out our boarding pass issue with AirAsia by phone before heading to the embassy. I was too lazy to reprint the new boarding passes, which looked exactly like my modified passes anyway.  We made photocopies of our passports at an office-van literally outside of the embassy. These people are smart businessmen/women! 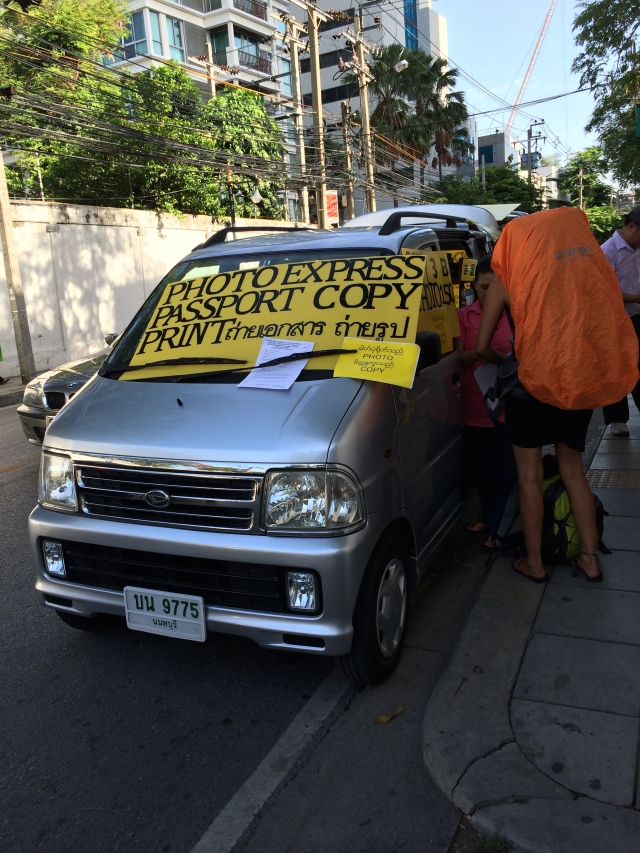 We all humored at this other car that appeared much later and parked in front of the van that had all the business. 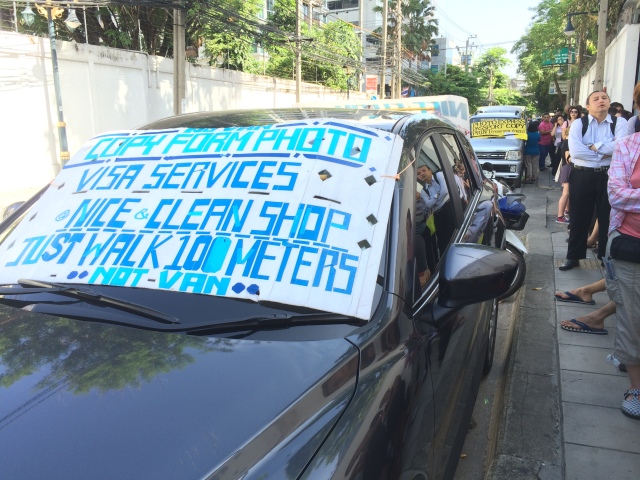 Despite the embassy opening 30 minutes later than scheduled, everything went as smoothly as expected. 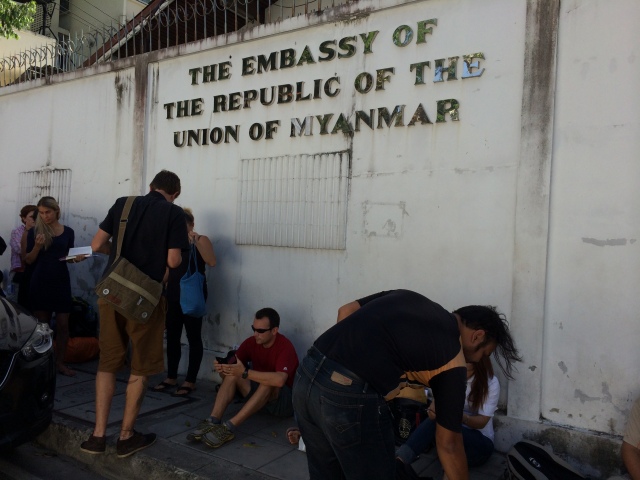 Exhausted from the previous day and waiting in the heat all morning, we were happy to spend the day in our spacious, air-conditioned hotel room. We had an “office” day, simply reading and catching up on life. Our passports were ready by 3:30pm, and I was relieved to see the ugly Myanmar visa-stamp in our passports.

That evening I enjoyed our FINAL night in Bangkok in the rooftop pool of our hotel which offered decent views of the state tower in the distance.

As I said earlier, the situation could have been so much worse. Bangkok is one of the best cities in Southeast Asia to be stuck in. We lost two days and learned a lot from it, and we were able to leave Bangkok AGAIN and journey to Yangon AGAIN.  This time, we made it to Yangon without any more issues.

This entry was posted in Thailand. Bookmark the permalink.