I had my first taste of culture shock. Its thin layer coated my tongue and prevented me from enjoying the flavors of Hong Kong the first few days, but it quickly dissolved after indulging in the basics, or should I say luxuries, of the first world.

We spent the past 4 months backpacking throughout Southeast Asia, which for the most part was modern enough. With Myanmar being our final “developing” destination, we were slightly disheartened to leave, knowing that the Romping and Nguyening Southeast Asian Tour was approaching its final days. However, our spirits were quickly lifted with the reminder that reliable internet, impeccable customer service, and fixed-price stores were only hours away with a layover in Bangkok, 1 week in Hong Kong, and 2 weeks in Japan.

But perhaps Hong Kong was a bit more than we were ready for—it was like a tsunami for the eager beginner surfer. It wasn’t the humidity or the clusters of unmannerly Chinese people. Nor was it the shiny air-conditioned double-decker buses, nor the efficient MTR subways. It was the cosmopolitan city with an over-abundance of affluence, splurge-worthy restaurants and bars, and the sleekest architecture and design. The desire to feel and look beautiful and own the latest and greatest attire hummed between every inch of flashing advertisement and billboard. It was mass commercialism and consumerism at its finest, the epitome of what I abhor most in modern society (after religion).

It was all too easy to become disgusted with ourselves when we spent HKD $260 (~$33 USD) on two of the cheapest drinks at the highest bar in the world, just days after haggling with street vendors in the streets of Myanmar over 20 cents on an apple. Worst of all, we enjoyed it so much that we went again on another day. It’s actually not the fact that money here can disappear so quickly if you’re not careful; it’s the fact that you and the people within your vicinity are all guilty of pretending to be rich. Seriously, who the hell spends $20 USD on a single freakin’ beer? Rich people, or people who are already drowning in debt and pretending to be rich! At the very least, I humored myself by comparing my dirt-stained hiking pants, trail running shoes, sports bra, and $2 tank top to the little cocktail dress and stiletto adorned women with makeup-stamped faces.

We knew lodging in Hong Kong wouldn’t be Southeast Asia-cheap. However we were able to find budget accommodation in Apple Hostel, perhaps the cheapest and cleanest hostel in Hong Kong on the Kowloon side in the infamously grimy and tiny Chungking Mansions.

For HKD $300 ($38 USD) we had a double room the size of a large closet with a shared bathroom. At least the air conditioner worked like an ice box.

When we extended our stay, we were moved to an even smaller room for HKD $350, but this one had a private bathroom. The NO VACANCY sign appeared not long after; we lucked out because neighboring hostels were ~HKD $500 ($64 USD) per room.

Hong Kong is famous for its ridiculous jaw dropping skylines. We visited more than a few touristy places that showcased a different perspective of them.

The iconic Avenue of the Stars: 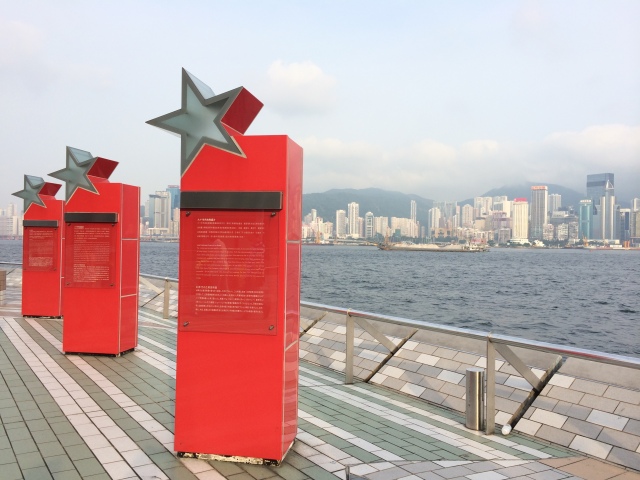 The evening Star Ferry during the nightly laser show:

View from the Red Bar at IFC:

View from the French Window restaurant/bar at IFC:

The Ozone Bar at the Ritz Carlton/ICC on the 118th floor: 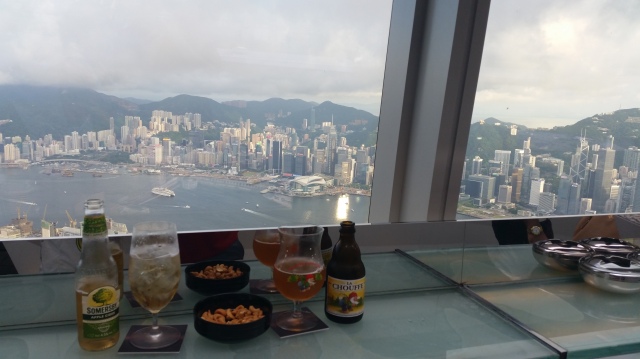 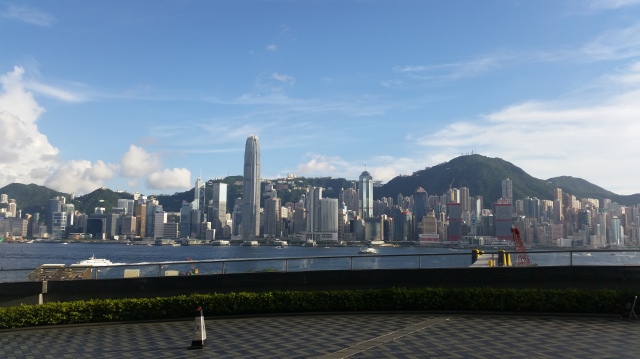 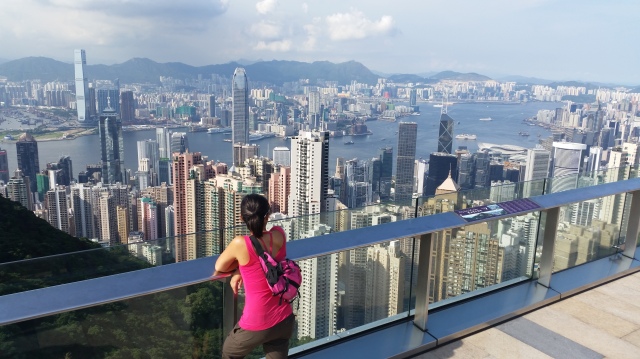 Hong Kong is also famous for a number of dazzling skyscrapers and shopping malls: 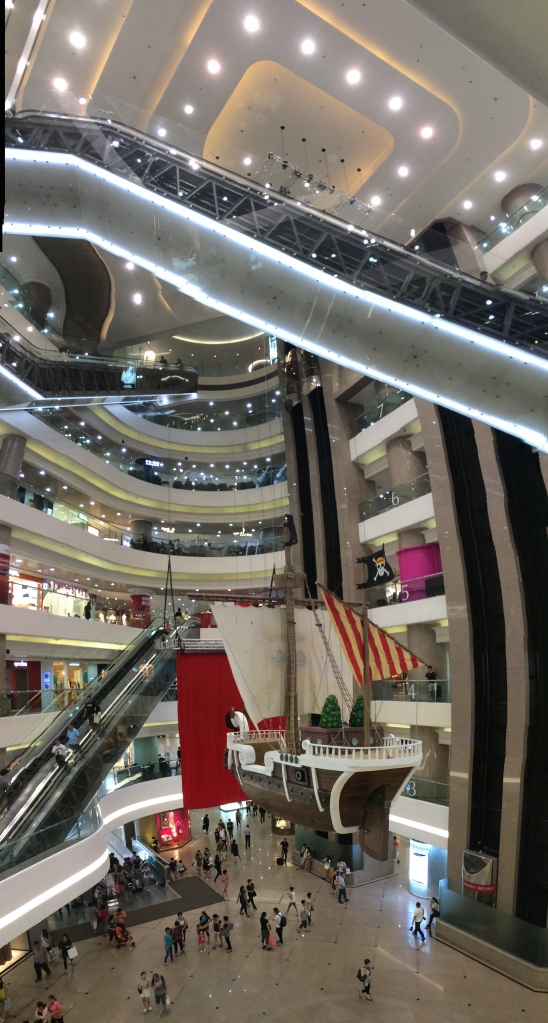 We only went to one market since we already browsed enough markets in Southeast Asia. The Women’s Fair at Mongkok happened to be mildly entertaining.

And of course, Cantonese food!

We fell in love with Tim Han Wan’s Dim Sum Specialty shop, which apparently is the cheapest Michelin Star restaurant in the world. The pork buns were the most scrumptious pork buns we’ve ever eaten. Due to its unusual slightly-fried exterior, the outer skin had a thin, crispy layer.  Warm, gooey BBQ pork oozed out from the center. If Pilsbury could make a pork bun, this would be it.

It was also of most fortunate coincidence that Chris happened to have a mixologist friend in town. On Friday night, he introduced us to his posse of some of the top bartenders in Hong Kong and had them mix up a couple surprise drinks for us in the swanky SOHO district. After three bars and artistically crafted drinks, beers, shots, and a large punch bowl filled with a dangerously yummy concoction, we happily found ourselves in a satisfied state of drunkenness.

Apparently in Hong Kong, you can get a credit card with your “business name” on it. Chris’ mixologist friend got this credit card as a joke. 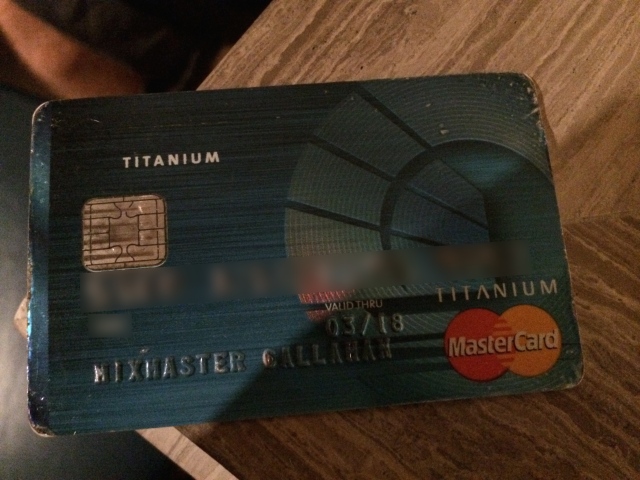 In addition to the skylines, food, and nightlife, we made a couple excursions in the outskirts of Hong Kong.

Signs all over Hong Kong advertised the visiting exhibit of Studio Ghibli, Miyazaki’s world-famous animation studio, at the Hong Kong Heritage Museum. An afternoon spent in an air-conditioned gallery is a lovely one. Our pet Totoro was thrilled. 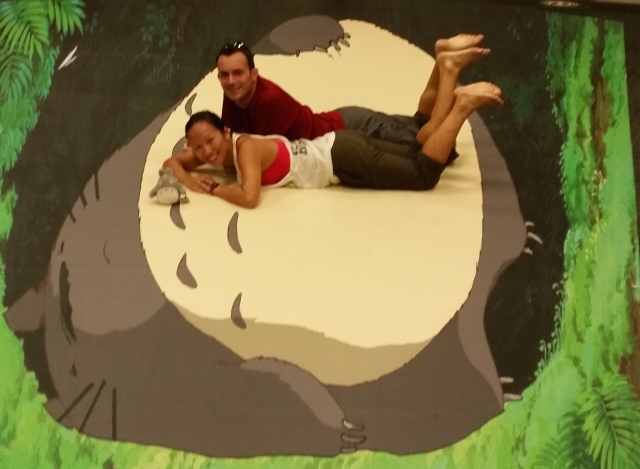 On another day, we took the MTR + touristy cable car up Lantau Island to check out Tian Tan Buddha, the largest seated Buddha in the world. 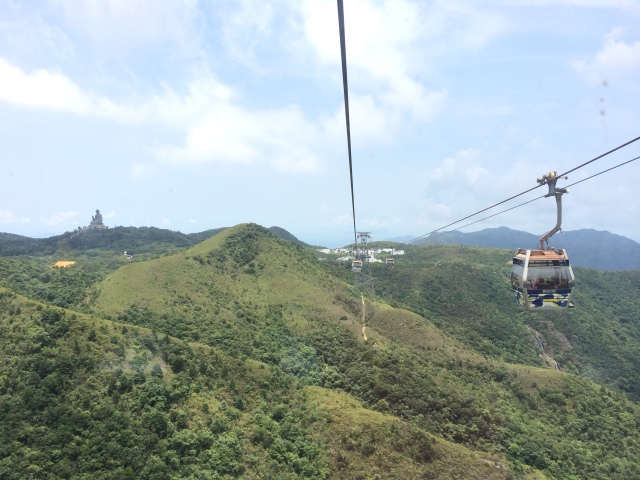 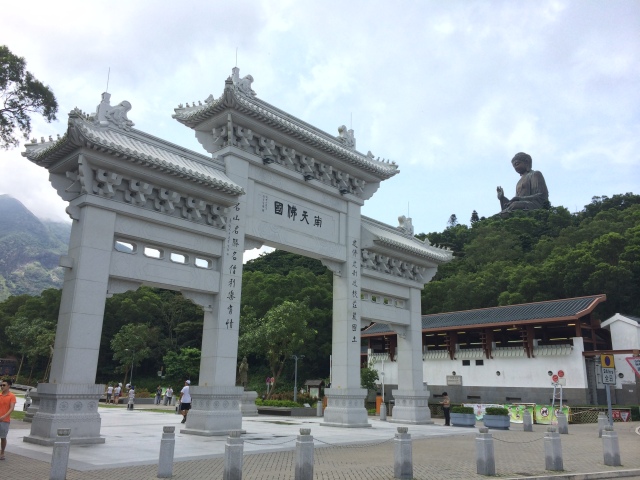 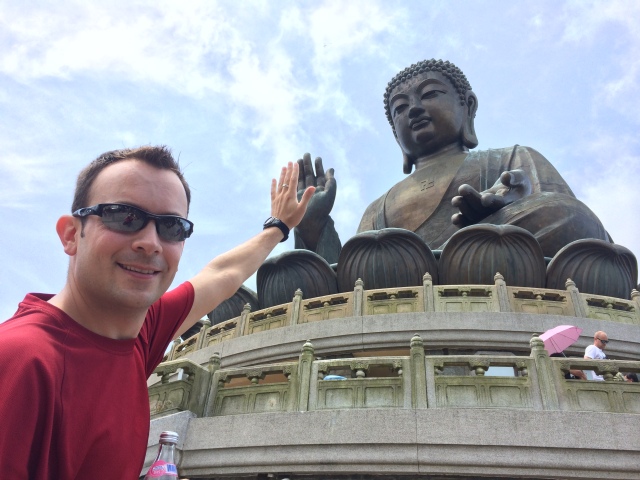 As you can see, the tiny mountain island of Hong Kong offers a lovely palette for the city lover. Despite being the city girl that I am, my favorite day in Hong Kong was my last day—a day away from the masses of people and consumerism, a day filled with sun, sweat, and the outdoors, my favorite kind of day! Read about Dragon’s Back in my next post.

This entry was posted in Hong Kong. Bookmark the permalink.