The Ironman Race That Didn’t Happen

The pro athletes usually plummet through the waters exactly at 6:30am the Sunday morning of race day, followed by the amateur athletes at 6:45am.  That was at least the case last year when Chris and I dreadfully stepped into the chilly, placid lake to face our first Ironman triathlon race despite air temps shockingly reading 30ºF.  (We found out later that our first Ironman is now considered the most arduous Ironman race.) This year, we looked forward to taking the year off from triathlons, and instead eagerly awaited race day to volunteer for the event and cheer on our friends who had spent all year training for the race that consists of a 2.4 mile swim, 112 mile bike, and 26.2 mile run.

Last year, with the water temp at 60ºF and air temp at 30ºF, an eery mist hovered over the lake, prohibiting any decent sighting. Photo taken from Triathlon Competitor: 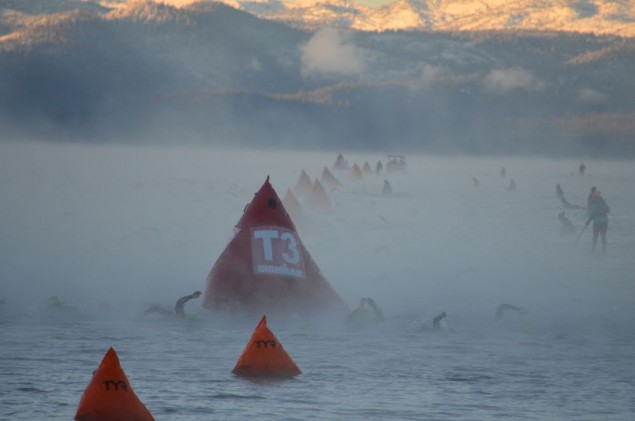 “Is there a late start this morning?” Chris asked an amateur athlete standing along the beach, whose wetsuit was only partially zipped up.  It was nearing 6:45am and the pro’s had not even begun yet.

Denial struck us within the first few seconds, but the truth sank in as our surroundings completed the puzzle.  Here and there athletes were scattered, some holding their transition bags, some even swimming out to the second buoy on the lake.  Paddle boarders and kayakers were making their way in, and a mundane silence replaced the expected excitement of race morning.  Seconds after the athlete told us of the cancellation, we heard remnants of the muffled announcement over the PA system regarding bike and transition bag pick up that morning. Ironman Lake Tahoe 2014 had been canceled.

Disappointed athletes pondering their next endeavour while gazing at the lake just before sunrise:

It was heartbreaking.  Thousands of friends and family members had taken time off work and traveled near and far (some even from abroad) to support.  Hundreds of hours were spent into planning and preparing the logistics of race day and the events leading up to it. But worst of all, Ironman dreams were shattered as athletes angrily or tearfully gathered their belongings only to return home without the finisher’s medal they spent all year hoping to call theirs.  The exciting psychological and physiological journey leading up to the day they could finally call themselves Ironmen ended up steering them into a pit of deflated pride.  All due to a forest fire.  A forest fire not from natural causes, but deliberately set by an arsonist.  The grief and despair was beyond imaginable for Chris and I; last year we faced near-record breaking frigid race temperatures during Ironman Lake Tahoe’s inaugural event, but we would much rather face unexpected snow and brutal cold over cancellation.

In the days leading up to the race morning of September 21, it was questionable whether or not the race would commence.  We arrived almost a week before the race, allowing us to witness the ominous bomb-like smoke hovering over Squaw Valley:

The winds gusting from the west had occasionally filled the Lake Tahoe area with smoke, contaminating the air with smoke pollution more dangerous than that of Beijing’s.  Lake Tahoe air was probably at its worst on Wednesday and Thursday afternoons.

Fortunately, it was predicted on Friday that the winds would shift, and sure enough the day was perfect and clear.  I even managed to get in a bike ride–I rode most of the Ironman Lake Tahoe 70.3 course for a reverse loop over Brockway summit.

By Friday it was decided that Ironman Lake Tahoe 2014 would continue, putting the nervousness and despair at ease.  Saturday morning was glorious, and Chis and I met with some friends in South Lake to enjoy a boat ride.  Unfortunately at around 4:30pm, the winds unexpectedly and dramatically shifted again, filling the lake with a perilous smoke.

Although the air tainted our clothing with a BBQ flavor, we enjoyed hanging out on the boat.

By the time we concluded our boat ride and docked the boat, the smoke receded, sparing us a moment of a picturesque sunset over South Lake Tahoe.

That very night, we even decided last minute to not only cheer on our friends, but to cook several pounds of bacon on the run course and pass out shots of bourbon; the prospective cheer booth was after all only a mile from the finish line.  We even purchased poster board and markers to make cheer signs:

But alas, the unexpected change in wind direction the late afternoon of Saturday resulted in the worst of Ironman Lake Tahoe 2014: cancellation.

After several hours of scrambling through the clusterfuck of the last-minute cancellation, hugging and offering remorse for our friends, and finally accepting the realization, Chris and I spent our morning stand-up paddle boarding while our friend Danielle worked on her open water swim for her upcoming first triathlon race.  Despite the shitty morning, we were at least able to lift our spirits by once again spending some time on the lake.

With slightly sunken spirits, we departed Lake Tahoe on Monday morning.  The air quality continued to be barely tolerable; the cancellation of the race was the right decision. Despite having a doomed reputation, we hope there will be an Ironman Lake Tahoe 2015 (I definitely will not be competing) so we can attempt to cheer and support our friends again.  I do not doubt that one day a number of our friends will be the proud owners of the finisher’s medal that I will now cherish more than ever.

This entry was posted in California. Bookmark the permalink.