I’m a little embarrassed to admit I’ve never actually backpacked in the woods for multiple days at a time.  Sure, I’ve done a lot of hiking, but I’ve never had to traverse valleys and mountains with sun and rain while carrying all my food and accommodation on my back.   All it took was incredible stories and photos, a different country, and a well-visited and straightforward backpacking route to convince me to jump aboard an approximately 100 km journey by foot.  Getting to Torres del Paine in Patagonian Chile was quite a hassle (a couple of flights, several cities, and numerous bus trips), but we all know some of the most magical places are the most remote.

In addition to transportation, things to consider were clothing, gear, and food.  Proper research on clothing ended up being worthwhile; my Marmot Precip jacket and rain paints and Saucony Gore-tex trail running shoes kept me 100% dry during an entire day of rain. We rented a 2-person tent, sleeping bags, sleeping pads, and mess kit (bowls, mugs, pot, and stove) in Puerto Natales for our camping gear.  And as for food, we purchased a Mountain House freeze-dried food bucket from Amazon prior to leaving the states.  The meals from the bucket ended up being more than enough for all our breakfasts, lunches, and dinners, accompanied by bread, chocolate, chips, dried fruit and nuts, beef jerky, and more snacks purchased from town. We even attended a Q&A session at Erratic Rock, a hostel that hosts daily talks at 3pm to prepare hikers for their epic adventure.

Unpacking 5 months of shit to repack for 5 days of shit:

We opted for the classic 5-day, 4-night “W” trek.  The 9-day, 8-night full circuit was a bit tempting, but I didn’t want to sign up for that having no experience backpacking.  Below is the W route, which can be hiked in any direction, though most people including ourselves hiked from west to east, saving the “finale” of the torres for the last day. 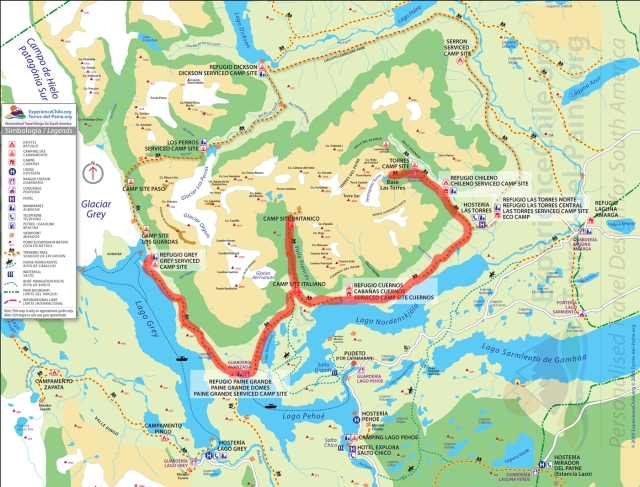 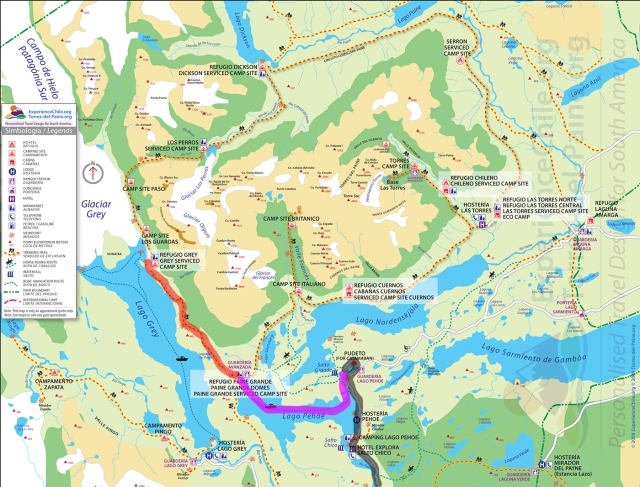 Although we had an early start to our day in order to catch the 7:30am bus, we didn’t actually start to hike until almost 1pm.  Add long bus rides, standing in line, waiting around, a catamaran ride, cold, wind, and rain.  By the time we started trekking, I already felt like I had a long day, nevermind the awful weather that laid ahead.

Before boarding the catamaran:

I’ll admit, Day 1 sucked ass. We kept our heads down most of the time to protect our faces from the wind and pellet-like rain.  Most of the hike was like a march, woefully trudging toward our destination.  The typically beautiful valley was socked in by murky clouds, preventing any glorious landscape from being seen.

At least we saw remnants of icebergs. 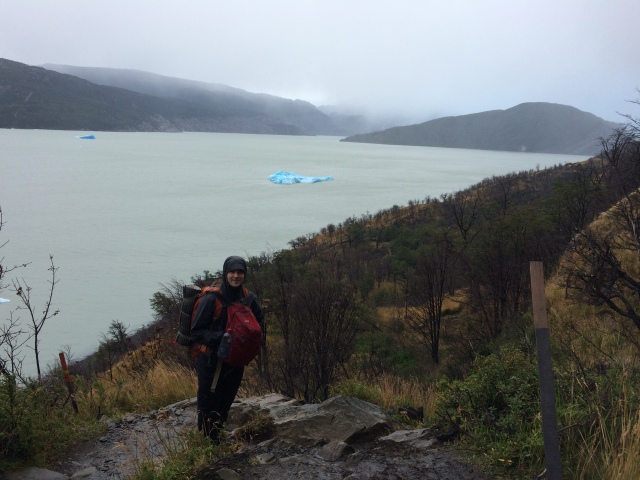 After we set up our tent at Refugio Grey, we contemplated hiking another 2 hours up to the Mirador at Paso to spectate Glacier Grey but after quick consideration we agreed that a 4-hour roundtrip hike in the cold rain wasn’t worth it.  (We found out later that others went and couldn’t see anything anyway due to the low clouds. However, I still regret not checking out the Mirador the next morning prior to heading back down toward Refugio Paine Grande.) 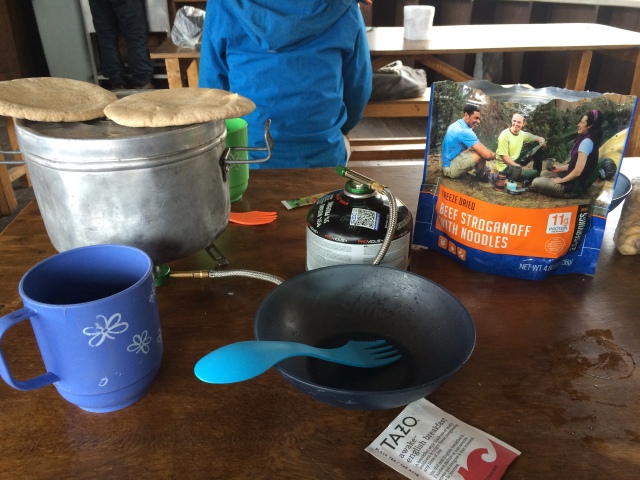 During our first night we endured howling wind and rain, but it reduced to a slight drizzle the next morning.

What was nice about backtracking down to Refugio Paine Grande was that we were able to see the beauty we missed out on the day before, such as Glacier Grey in the distance:

After lunch the clouds thinned out, the sun made its first appearance after days of solitude, and the temperature warmed up.

And we continued east toward our next campsite. 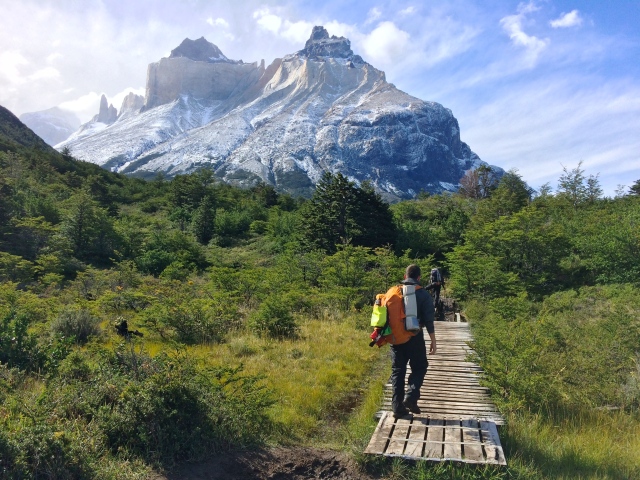 The campsite was nestled in the woods beside the river, just across this bridge. 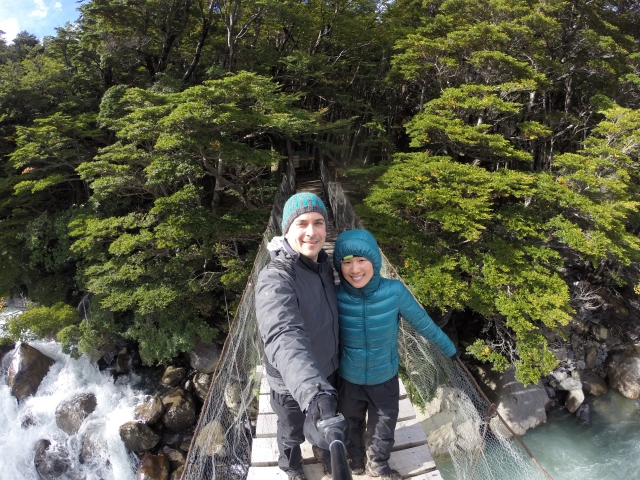 Not long after we set up our tent, it began to rain again.  We spent the rest of our evening huddled in our sleeping bags to stay warm. 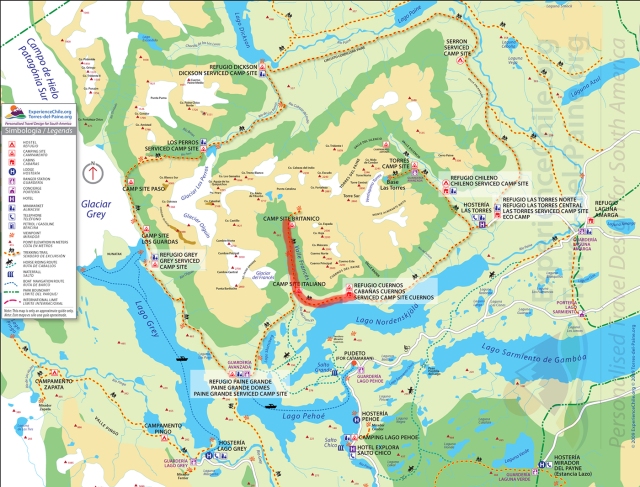 Thanks to sleeping early, we awoke the next morning practically before everyone else for our trek up the valley.  We left our heavy gear at camp, packed a day pack with snacks, and ventured up the center of the W toward Mirador Britanico.

Patches of frost grew to an abundance of snow the further we hiked up.  Apparently it had rained and snowed for 3 consecutive days and we received the tail end of it.  Due to the weather, the pass had been closed for the possibility of avalanches, and now it was open again!  Because it hadn’t been hiked for a couple of days and we were up so early, we were the first to stamp fresh footprints into the snow.

It was cold and windy, but the dramatic clouds and lighting made for gorgeous photos:

After viewing the miradors, we returned to Campamento Italiano to eat lunch, tear down camp, pack up, and trek to our next campsite at Refugio Cuernos.

It got much warmer as the day progressed.

We couldn’t help but hang out on the lakeshore for a bit.  The weather was just too perfect.

Refugio Cuernos literally sat along the lake.  We enjoyed reflecting upon our day on this lakeshore after dinner.

Relaxing after the perfect day’s hike at Refugio Cuernos.

The sky was clear that night, and we even laid in our sleeping bags outside for a bit of stargazing.  The number of stars we saw was incredible.  Every black patch of emptiness we focused on became an open window for even more stars.

This day was the most difficult day, with seemingly endless steep ascents along with the warm afternoon sun.  However the day began with a lovely start–a clear sky with cascading sunshine on the famous mountains.

We enjoyed several flat miles before descending into the valley. 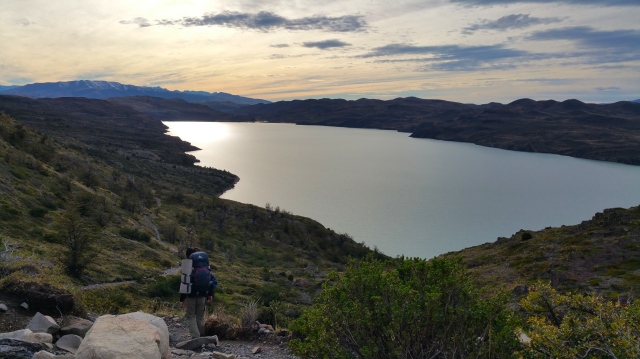 By around noon, our legs were fatigued from the steep hills and the weight on our backs, but the view down the valley into Refugio Chileno lifted our spirits.

We lunched at Refugio Chileno, and continued for another hour until we reached Campamento Torres.  After setting up our tent and taking a short break, we continued up to spectate the wonderful, the mighty, the famous Torres del Paine.  It was quite a technical trek on the way up; most of the hike consisted of scrambling over rocks on top of a narrow stream just wide enough for one individual.

And oh how the Torres (towers) were breathtaking.  Like everyone says, photos do not do them justice.  The enormity, beauty, and tranquility of the site was surreal.  And of course, the amount of effort it took to get there made the experience more rewarding. 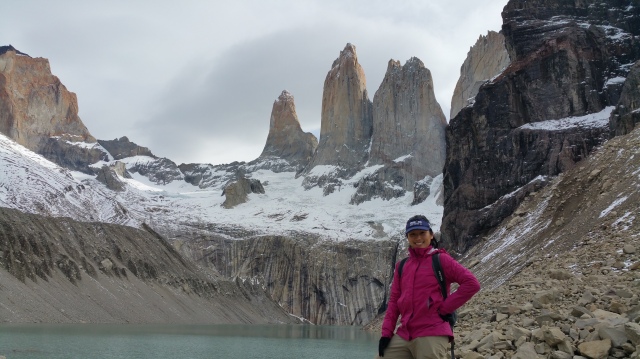 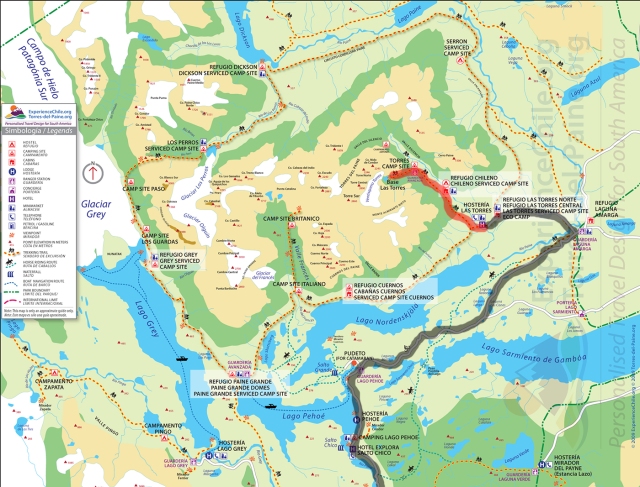 This was it. This was the final day.  This was the day for the notorious hike in the dark to witness the sunrise on the Torres.  Our excitement wiped the burning pain from our calves that lingered from the previous 4 days of hiking.  We were glad we hiked the path the afternoon before, so scrambling over rocks wasn’t too unfamiliar in the pitch darkness. Once again we left behind all our gear, packed a day pack, and ventured on up.

The weather was perfect.  It was cold as fuck, but the air was still, the wind was dead, the skies were clear.  Climbing up heated our bodies, but within minutes of being seated on one of the many boulders at the mirador, our hands and feet became instantly numb from the cold.

Waiting for the sunrise:

As the sun climbed, the Torres slowly came into view. 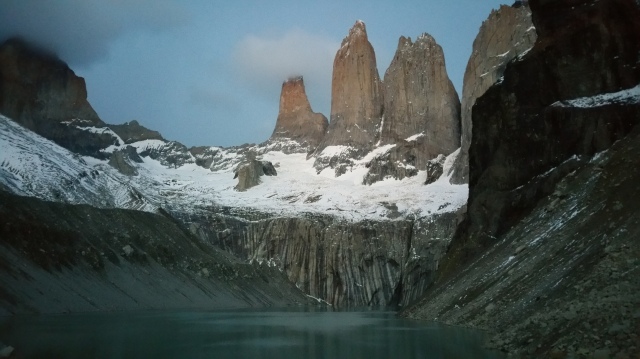 And finally, after what felt like ages in the nibbling cold, the Torres glowed a brilliant red.

Hundreds if not thousands of trekkers all around the world come here each year to witness this magical sunrise.  Not all are lucky enough to have even the slightest fair condition; I’ve heard stories of rain and snow that prohibit the sunlight from hitting the Torres.  Planning the Torres del Paine trek is a crap shoot.  The weather is so unpredictable, and we were fortunate to only encounter 1 day of rain over our 5-day trek.

Below is a final picture with some friends we made along the journey.  You can see Hotel Las Torres (for those inclined to spend $300-$400/night) and the mountain we just descended: 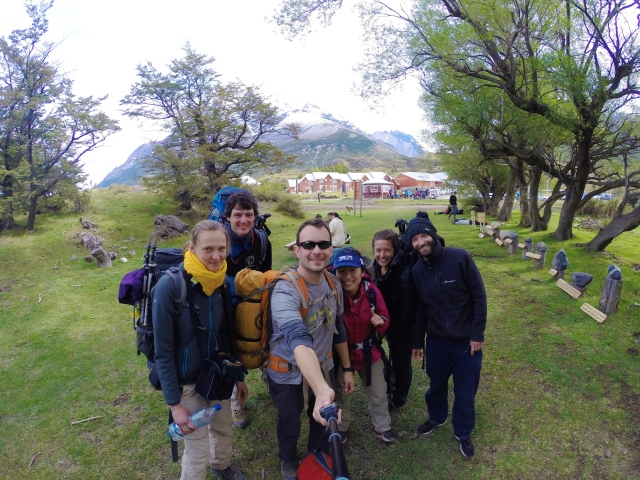 And just because Patagonia isn’t complete without a derpy llama pic (click on the pic to enlarge and enjoy the derp in all its glory): 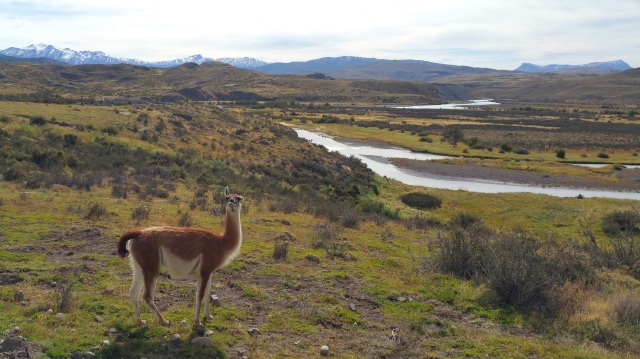 After not washing my hair, wearing the same clothes, and trekking through rain and mud and cold and heat for 5 days, I couldn’t wait to return to the hotel for a proper shower and a comfy bed only to leave again the next day for Patagonian Argentina.

This entry was posted in Chile and tagged torres del paine. Bookmark the permalink.